When one thinks of the wealth of British playwrights who have contributed to the theatrical literature, certain names quickly come to mind. Thanks to William Shakespeare, Richard Brinsley Sheridan, George Bernard Shaw, Noel Coward, and William Schwenk Gilbert, the world's wealth of comedy and tragedy has become infinitely richer.

From John Osborne, Caryl Churchill, Joe Orton, and Alan Ayckbourn to Harold Pinter, Alan Bennett, Robert Bolt, and Terence Rattigan; from Michael Frayn, J. M. Barrie, Arnold Wesker, and Simon Gray to David Hare, Peter Shaffer, T.S. Eliot, and Peter Ustinov, one need not be a rabid Anglophile to appreciate the immense scope of the contributions made by British writers to our understanding of the human psyche.

But what about contemporary British playwrights? Earlier this year, two plays by two of Britain's most beloved playwrights were presented within a block and a half of each other in downtown San Francisco. Both productions were so beautifully crafted and magnificently acted that it almost took one's breath away. Each required a tight ensemble, careful attention to English accents, and an audience's devoted attention. Each delivered in spades.

The first time I saw a performance of Tom Stoppard's 1993 play, Arcadia, I did not have a very good experience. I don't know whether I was sitting in a bad acoustical pocket of the theatre, whether my blood sugars were running high, or whether I was just plain tired. For the life of me I just couldn't seem to get involved in the performance. This year, American Conservatory Theater unveiled a magnificent new production of Stoppard's play that turned my experience with Arcadia completely around.

Stoppard has occasionally referred to Arcadia as "a thriller and a romantic tragedy with jokes." Not too many playwrights can make merry (and keep an audience's attention) with talk of iterated algorithms, a young woman's attempts to prove Fermat's last theorem, a 19th century understanding of heat exchange (the second law of thermodynamics), 20th century chaos theory, and the centuries old mystery of a most mysterious hermit.

Along the way Stoppard's audience gets to witness a teenager's curiosity about the meaning of "carnal embrace," a vain poet's cuckolding by the teenager's tutor in the gazebo of an English country house, the curious role Sidley Hall plays in revealing the ramifications of a sexual indiscretion that took place 200 years ago, and the professional meltdown of a pompous fool who has the floor pulled out from beneath his cockeyed theorizing. 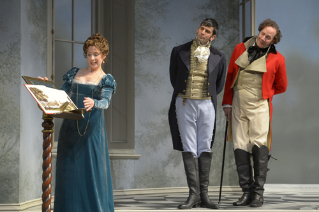 A great deal of the credit goes to director Carey Perloff, who has long held a torch for Stoppard's work. Hailed by many as a modern masterpiece, Arcadia offers actors the kind of fiercely intelligent, multi-layered script that allows them to delve into the social climate of the early 19th century (as well as that of the early 21st century). As Perloff explains:

"It's a great time travel play. What's humbling about working on Arcadia is the breadth of Tom's curiosity. Who else would put chaos theory, Byron, and landscape architecture together? Arcadia's joy in discoveries (scientific discoveries, academic discoveries), joy in getting it wrong, joy in justifying it, that crazy pursuit of knowledge and Tom's amusement with our blind alleys seems particularly acute to me now. It is utterly wrong to think that science is in some way unromantic and rational, just as it's wrong to say that someone in the humanities can't be precise and scientific. Science has become so overwhelmingly beautiful. When you start to iterate fractals, it is magical. It is like seeing the hand of God. It is like seeing a part of a coastline and then a bigger section. That same iteration and fractal gets bigger, and it is holy, spiritual, and beautiful." 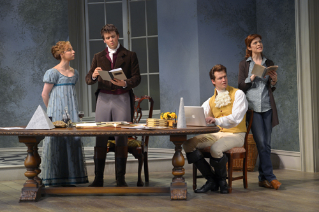 The American Conservatory Theater's production presented Stoppard's complex theatrical tale with such a rare sense of dramatic clarity (resting on a foundation of crisp diction) that its nearly three-hour length flew by unnoticed. With a talented ensemble consisting of Rebekah Brockman, Julia Coffey, Jack Cutmore-Scott, Anthony Fusco, Nick Gabriel, Ken Ruta, and Nicholas Pelczar (for the portions of the play that take place between 1809 and 1812) -- and Allegra Rose Edwards, Gretchen Egolf, and Adam O'Byrne (for the scenes that take place in 2013) -- the evening was filled with intellectual merriment, sexual abandon, and socioeconomic context.

Add in England's long history as a society often defined by class, some professional rivalry mixed with curatorial sleuthing, and a set of magnificently-etched characters from two distinct eras and audiences were greeted by a cornucopia of dramatic riches wrapped in a delicious sense of irony. Special mention should be made of Titus Tompkins (whose characters appeared in both time periods) and Andy Murray, who gave a bravura performance as Bernard Nightingale (an egocentric buffoon of a professor) who gets properly humiliated by his colleague, Hannah Jarvis (who handily disproves Nightingale's theory about Lord Byron). 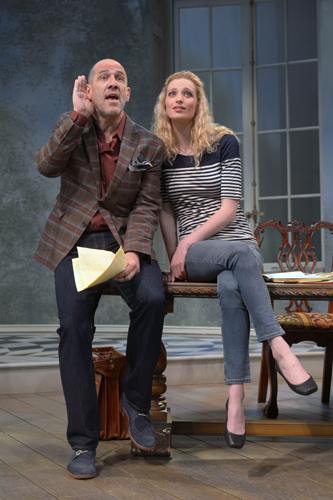 I'm always intrigued when a massively complex script is allowed to stand on its own without being drowned in production values. I tip my hat to Douglas W. Schmidt for his tasteful unit set and Alex Jaeger for a wardrobe of period costumes which served to enhance (yet never overwhelm) the onstage ambience. That characters set apart by more than two centuries could appear onstage simultaneously without ever trashing the dramatic illusion is a tribute to Stoppard's genius, Schmidt's simple elegance, and Jaeger's restrained palette. Perloff, however, is quick to point to another one of Arcadia's frequently overlooked strengths:

"Because I've been doing a lot of work on gender disparity lately, one of the things I have really noticed in the play is that it's about how women's voices are consistently muted. If Thomasina had been a man, her equations would have been taken seriously. If Hannah were not a female scholar working on what we would now call feminist criticism about Caroline Lamb, she would have been taken seriously. The way Bernard pisses all over Hannah's work is often how male star academics treat women. Unlike many American playwrights of his generation, Tom writes spectacularly interesting women and is deeply respectful of women. He really has an appetite for three-dimensional women, and I think that cannot be underestimated. When you look at his counterparts in America, they are not like that. I think it's really worth noting." 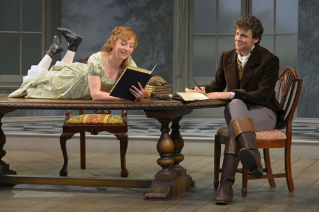 Rebekah Brockman and Jack Cutmore-Scott in a scene
from Tom Stoppard's Arcadia (Photo by: Kevin Berne)

Perloff's staging of Arcadia offered audiences a dream production of a near-perfect play as well as a rare chance to see Stoppard's work performed with such loving attention to detail.

San Francisco Playhouse had a hit on its hands with its new production of Abigail's Party. First produced in London in 1977, Mike Leigh's dramedy revolves around the kind of cocktail party during which everything that could go wrong does so with spectacularly bad results.

The small cast of characters includes: 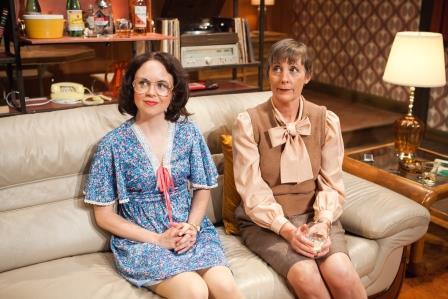 Angie (Allison Jean White) and Sue (Julia Brothers) are two
of the guests at Beverly's party (Photo by: Jessica Palopoli) 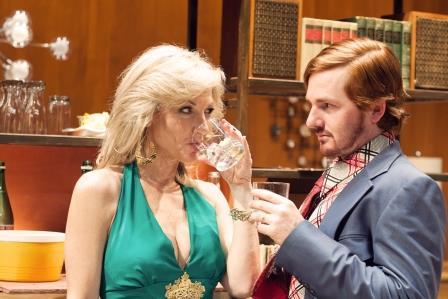 While it might be tempting to compare Abigail's Party to Edward Albee's legendary Who's Afraid of Virginia Woolf?, neither Beverly nor her put-upon husband, Laurence, have the intellectual chops, deep reserves of venom, or bloodthirsty desire for revenge that come naturally to Albee's George and Martha.

Susi Damilano looks like she's having a blast portraying Beverly while Julia Brothers and Patrick Kelly Jones prove, once again, that it's the quiet types you really have to keep an eye on.

Working on a magnificent set designed by Bill English, Amy Glazer has done a splendid job of directing San Francisco Playhouse's tightly-knit ensemble. Special mention should be made of Tatjana Genser's costumes and Lynne Soffer's contribution as a dialect coach. Here's the teaser: