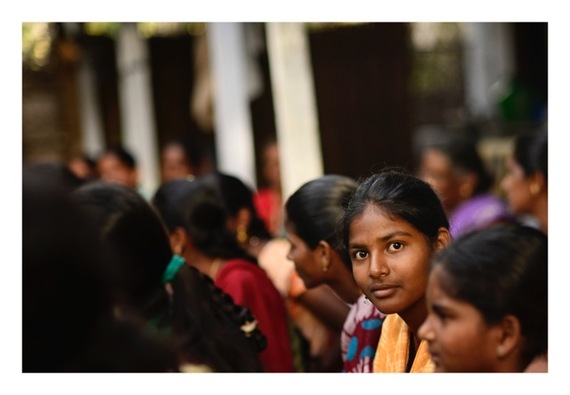 Photo: Women and girls working in the spinning mills in Erode, who will be assisted by the Centre for Education and Empowerment of the Marginalised (CEEMA), funded by the Freedom Fund. Credit: Ryan Lobo, for C&A Foundation

Sangeetha and Seetha* have been working at a spinning mill in Tamil Nadu state in southern India for the past seven years. Both women have young children and were desperate for work to support their families after being abandoned by their husbands. Sangeetha's son is also physically and mentally disabled, needing special care at home. Working conditions in the spinning mills where they are employed can only be described as exploitive and abusive. Like many of their peers, Sangeetha and Seetha have experienced sexual and physical abuse from mill supervisors and other male workers. Because they are afraid of retaliation, they would only share their stories with Freedom Fund representatives in private.

Sangeetha and Seetha are at the far reach of a supply chain that stretches from their villages in Tamil Nadu in southern India to consumers across India, Europe and the United States. Tamil Nadu is India's primary hub for producing cotton yarn, home to an estimated two-thirds of the country's spinning units. Jobs in spinning mills are crucial for the workers of Tamil Nadu and India's economy, yet tens of thousands of girls and young women have been recruited into employment schemes in mills that result in extreme forms of labour exploitation. Many American and European brands go to great lengths to ensure that their products are not made with bonded labour; however, because of the complexity of their multi-tiered supply chains, among other issues, they find it challenging to verify or ensure decent working conditions.

This week, the Freedom Fund, through support from C&A Foundation, is providing its first grants to local organisations - including SPEECH, which is working directly with workers like Seetha and Sangeetha to help them improve their lives. SPEECH will be providing psychosocial support and legal advice to workers and former workers, as well as helping them form village-based forums to prevent adolescent girls from risky recruitment into the mills.

Over the coming three years, the Freedom Fund will work with 13 community-based NGOs to reduce economic and social vulnerability in 240 villages across four districts in the region.

Workers, parents, and families of those most at risk will form "community freedom groups" to prevent exploitation of girls and young women by exposing and resisting offers from fraudulent labour brokers. With support from the NGOs, these community groups will also advocate for improvements in local schools, push for India's economic safety nets to function better, and identify new ways to improve their families' incomes. They will also help girls and young women who face chronic illnesses and injuries after years of overwork in the mills to access new skills, complete their education and pursue cases for compensation.

But community-based efforts alone are not enough. The NGOs we support will also work with local government to strengthen the implementation of policies meant to protect workers including minimum wages standards and regulations for conditions in workplace hostels. At the same time, we are working closely with several leading retailers to ensure that mill owners improve working conditions and respect compliance standards. To tackle this industry-wide challenge, businesses must work together and partner with government, suppliers, worker organizations, and community-based initiatives.

Through this partnership, the Freedom Fund and C&A Foundation are working to eradicate bonded labour in the textile industry in Tamil Nadu in the long run. By working with a wide range of local and international partners, and taking a holistic approach, we ultimately seek to improve the lives and livelihoods of workers throughout the region's textile industry.