JustAnswer.com is an interesting site on which you can get important and timely answers to your questions. Questions about your mother's, daughter's or family pet's health; a crucial legal question; or one of life's more serious tribulations.

It is not a site to settle bar bets about sports or a place where you get 'Google-like,' undecipherable results which then need to be waded through like the flood last spring in your basement.

No, JustAnswer.com is a place for the more important questions people face and the company takes its obligation to online question-askers very, very seriously; seeing itself more as helping the world than answering questions. In their contented San Francisco, Presidio-based offices (where it seems more attuned to walking your dog on the green or playing Frisbee than working), a sign hangs on the wall reminding people of why they do what they do there: "We're here to help people" it says. And so they are.

Andy Kurtzig is the youngish, progenitor of JustAnswer who has a real sense of duty--he's solemn about his company's value proposition for customers--to answer their questions right with promptness. He's also easygoing, funny and conversationally charming. It's his solemnity though, that is something he's infected his team with by osmosis: everybody who works there feels it. They feel it because he exudes it. 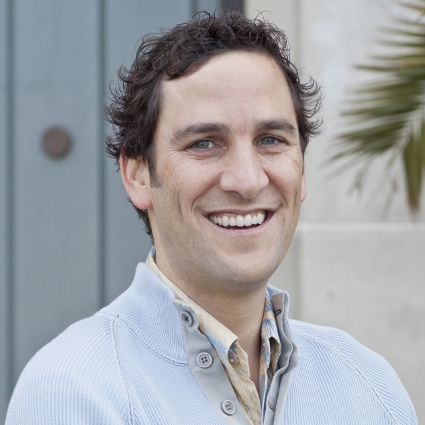 Before getting on to the fun part where I attempt to tell the JustAnswer.com story, an important news alert for you, the reader: JustAnswer.com is changing its name.

"JustAnswer has been a good name so far," Kurtzig said explaining the name-change, "but we don't just answer questions anymore; we provide professional services with real doctors, lawyers and so on providing answers to urgent, serious questions. We found we were being lumped in with the forums, chat rooms and ad-driven sites," he said frustrated.

The reason a business is started is the most crucial part; great businesses have great reasons for starting. Just Answer was started with perhaps the best reason behind it imaginable: love for wife and family. When Kurtzig's wife Sara was pregnant in 2003--like most young prospective mothers--she had a multitude of questions. The father did too.

So Kurtzig did what any of us would do and jumped on Google to begin his arduous, troubling quest for precise info and answers to very finite, specific questions about having a baby. He was floored by the depth and breadth of the results. "There were all these crazy diseases ... no judgment ... it only confused me more."

So the father on a family-mission again did what any of us would do--provided we had advanced programming skills--he built a web site to answer his wife's concerns. "I've been programming since I was a kid," Kurtzig said smiling broadly, "so that let me program a site for my wife to get her questions answered. It did occur to me as I was creating the site that the number of people wanting to talk to experts on the Internet must be huge."

It took Kurtzig one month until his wife had a working, online resource for her medical questions and then Kurtzig began telling his friends and tried to get others to use it. As the site grew organically with medical questions, an interesting dynamic surfaced: users wanted other types of questions answered. "So this turned into a B2C (Business to Consumer) opportunity," Kurtzig said, "an 'eBay for services' if you will. We've seen a big need for what we call 'professional services.' So in addition to doctors, we now provide online, rapid answers to important questions from lawyers, accountants, mechanics, contractors, veterinarians, IT professionals and so on."

So far, the company has a flat-fee model for answering what can usually be crucial, emergency-style needs for information. When I asked a medical question of a JustAnswer' doctor who was online and ready to respond immediately, the charge was what I thought was a reasonable $18. A similarly important question to a lawyer was an evenhanded $38. The web site also offers unlimited questions for $35 per month with no year-long contract or cancellation fees.

Kurtzig summarized the excitement he and his company feels, "Pearl.com is a perfect name for this business. Pearl, from 'pearls of wisdom;' to me it's like Amazon--if they were called 'Books.com' they wouldn't have won--and Oracle. These are big businesses."

Andy Kurtzig knows about big businesses; he has them in his DNA. His mother, Sandra Kurtzig is someone I've been tracking since the early 1990s. She was the founder of ASK Computer Group and the author of "CEO: Building A $400 Million Company From The Ground Up" (Harvard Business Press). She also has a hot, new Cloud/ERP start-up, Kenandy funded by the likes of Ray Lane and Kleiner, Perkins with Marc Benioff and Salesforce.com for good measure. As her son Andy told me, his mother's new company name is derived from the compilation of his and brother Ken's names.

His father, Arie Kurtzig, studied under Nobel Prize laureate William Shockley at Stanford University--without Shockley, the computer industry might not exist. The late Kurtzig, who got the first Ph.D. in Electrical Engineering ever awarded by Shockley; worked over 10 years at H-P; and invented the touch-screen, albeit more than 20 years too early leaving any patents to expire. (Damn, I hate when that happens.)

So Andy Kurtzig has about as strong a technology pedigree as anybody. Now he's on a mission to make a big splash for himself.

(From this point forward, JustAnswer.com will be referred to as Pearl.com.)

There are three reasons why Kurtzig's business seems destined for glory:

1) His aforementioned pedigree along with the way the business was founded as a tip-of-the-hat to "necessity is the mother of invention."

2) The success of the business so far: Pearl.com is the 121st most visited web site on the planet; is used in 196 countries; has three patents and nine more pending; a $100 million annual revenue run-rate; and finally is funded by a group of "super-angels" like you wouldn't believe.

3) His Board of Directors which includes Charles Schwab; Sandy Robertson, legendary founder of Robertson, Stephens & Company and Montgomery Securities both Silicon Valley capital lynchpins; Larry Sonsini, name partner of Silicon Valley icon law firm, Wilson Sonsini Goodrich & Rosati; and Bob Finocchio, who was CEO of Informix, President of 3Com and is currently a Director of Broadcom. Kurtzig says he built "an old school board intentionally" and I have rarely, if ever, seen a small company BofD of this magnitude and standing. To make things even more tantalizing, these board members are also Kurtzig's angel investors.

According to Charles Schwab, Chairman and founder of Charles Schwab Corporation, "What Pearl.com is doing is truly innovative. The idea of bringing even a small percentage of the professional services market online, in the way that Amazon.com did with retail is a multi-billion-dollar idea. With an established network of the industry's best professionals, a proven and thriving business model and now the new site and brand, I think Pearl.com is positioned to see exciting growth in its customer base." Kurtzig added, "I think what Chuck likes is that Pearl.com is doing what he did for the financial services industry where prior to him, only rich people traded stock. He democratized the industry." 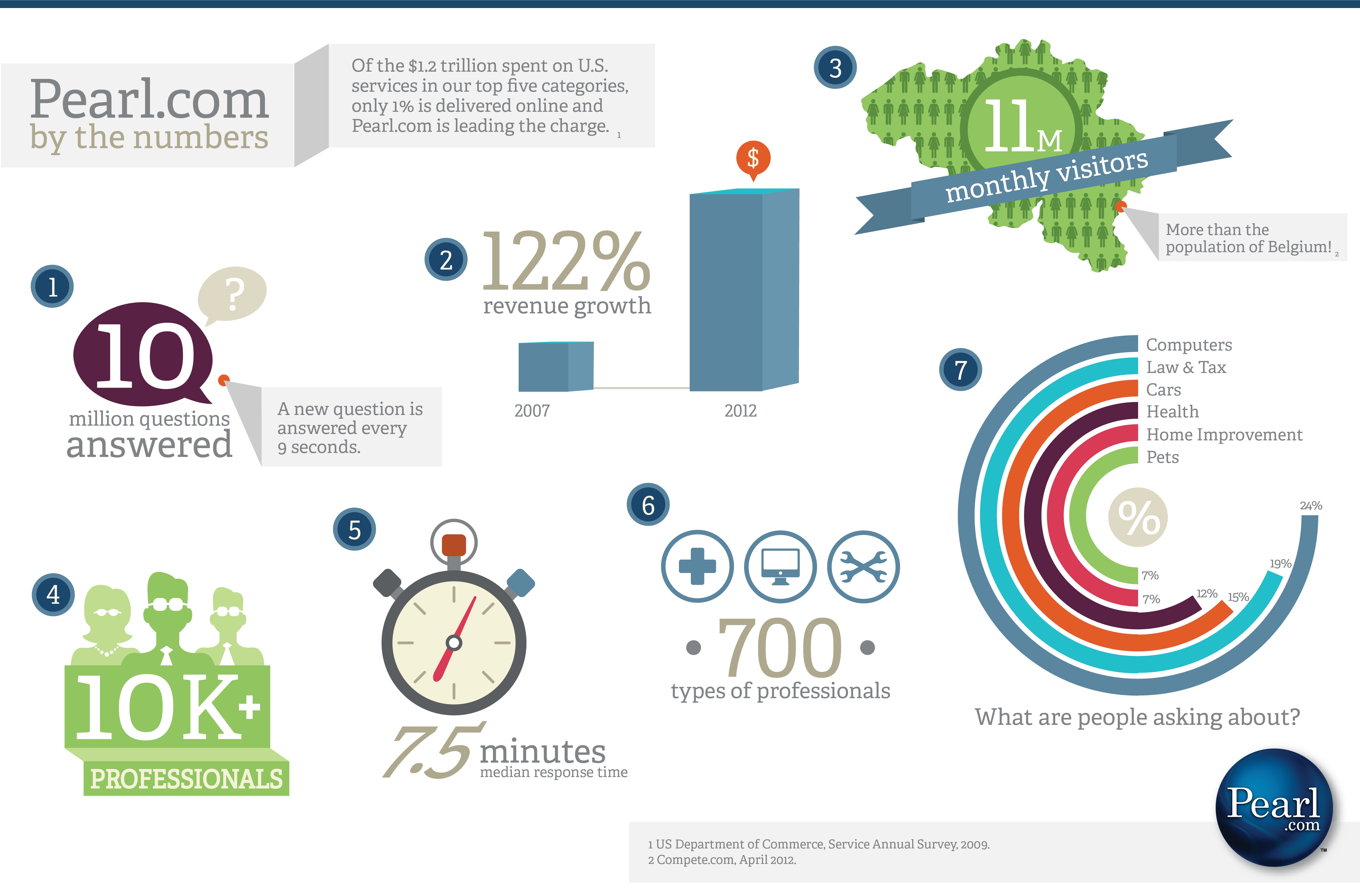 Hmmm ... I think I feel another disruptive Internet success percolating.

Kurtzig is radically quick to point out a few crucial things about his business. First, he says, "The hardest part is delivering fast, quality answers. But we've spent the last nine years tweaking the 'fast' and 'quality' parts."

Pearl.com responds in an average of seven and a half minutes to the questions it receives, according to Kurtzig, this makes it super convenient if it's 4am and you have a sick dog or baby or husband.

The "quality" part is a lot harder. Pearl.com receives over 18,000 applications to become an expert each year, and says they only accept the best of the best into each of their over 200 categories. This allows retirees, working mothers, and full-time professionals alike to make some extra money from home with a flexible schedule. For 'night owls,' this may be the perfect job. Additionally, the record high monthly earnings for one expert was $40,000. 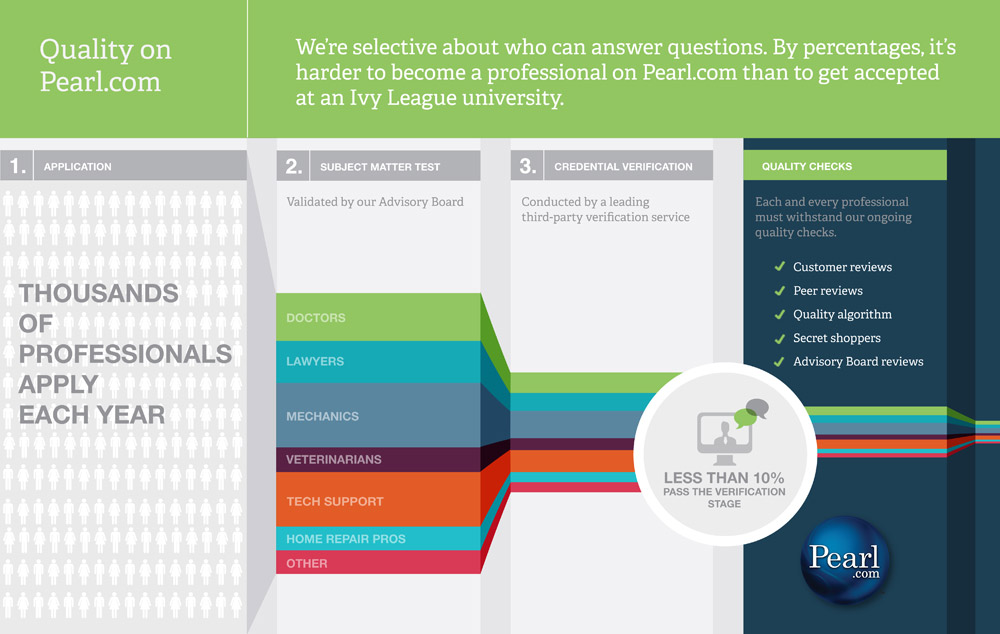 But the company says it's not just about the money. Experts tell them they like to help their customers solve problems quickly and efficiently by using technology in a way that would not have been possible 15 years ago. One expert writes "Every day thousands of questions are asked and my business is only improving. As for myself, what I hoped would bring in a few extra dollars has blossomed over the past several months into a significant income which has been a huge help to my family. I can't praise [Pearl.com] enough for connecting me to customers who need my help and are willing to pay for a good answer."

In addition to the main categories, Pearl.com is always looking for qualified experts in categories like Car, Home Improvement and Consumer Electronics (to mention just a few). To become an expert, visit their "Become a Professional" page to apply.

One testimonial, comes from a man who used this unique service not just once for an important immigration question but also again for a life or death medical question. Seeing this man talk about his brain hemorrhage and his daughter 'being the light of my life," really made me think hard about Kurtzig's "we're here to help people" exhortation to staff and the serendipitous way he came to start the company.

If even a small percentage of Pearl.com users have this kind of experience in terms of speed and quality of answers, this company is a real Internet game-changer.

So in the final analysis, what might the future hold for Pearl.com and Andy Kurtzig? "Well, it takes about eight years for a salt-water pearl to develop," Kurtzig surprised with the extent of his pearl knowledge, "and we started Pearl.com in 2003, so I'm thinking the timing is about right." When I asked him about a "liquidity event" such as an IPO or acquisition by a Goliath in Internet, he said enthusiastically, "I'd like to continue to scale Pearl.com; when you look at how retail turned out for Amazon and eBay who have $50 billion each of the market and then consider that the Professional Services market is easily $100 billion, you start to see the opportunity."