Paul Beckman's stories are widely published in print and online in the following magazines amongst others: Connecticut Review, Raleigh Review, Litro, Playboy, Pank, Blue Fifth Review, Flash Frontier, Metazen, Boston Literary Magazine, and Literary Orphans. His work has been included in a number of anthologies and published in a dozen countries. Paul earned his MFA in creative writing from Bennington College. He is also a photographer, both above and beneath the water. His latest collection of flash stories, Peek, published by Big Table Publishing weighed in at 65 stories and 120 pages. 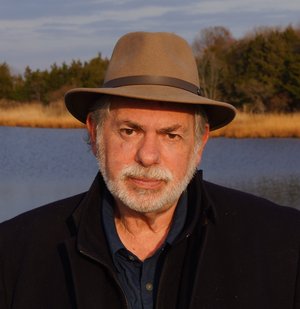 Loren Kleinman (LK): Talk about the theme of voyeurism that runs throughout your short story collection, Peek. Is voyeurism a part of our nature? Why or why not?

Paul Beckman (PB): Even though voyeurism's definition has sex attached to it, there's another accepted meaning of it through common usage as watching, sneak peeking, listening in, talking about and the like. Think of rubber-neckers holding up traffic, people going hush at their restaurant table to listen to something juicy at the next table over, families whose arguments spill out through open windows and onto porches--all with others watching or listening or both.

My book gives people permission to Peek; to look in on marriages, affairs, families and their secrets, couples, neighbors, strangers, the prurient and the innocent, the pedophile, the elderly, parents and children--all the while accepting their nosy behaviors as kosher on their part but not always so kosher when they are on the other end.

It's my belief that we are all voyeurs given the opportunity and Peek provides that opportunity in many of its stories, in various ways and places with disparate people in situations both unique and common. Keep in mind, all of those telescopes in those entire city apartment buildings are not there for the love of star gazing.

LK: I found myself peeking into each short story, into the protagonists' lives. What about each story lives on beyond the page? Are there more secrets embedded in the pages?

PB: The secrets revealed in these stories are the ones that escape to be read but are by no means the sum total of the characters involved. They all have a prequel and a sequel and more in between that's not shared with the reader; but the reader, from her own experiences, can summon up happenings, conversations, deafening silences and secrets not told and there's always more and never less and that's the great thing about writing flash fiction--there's always more out there with everyone. Just like in the reader's life. No one, not even the best of friends or closest of family members knows the whole of another.

LK: What's the relationship between sex and ambition in Peek?

PB: The relationship in Peek between sex and ambition is that every story that features sex has one partner whose ambition it is to have it and wanting it is just plain not enough. Whether it's the desire without the ability, the false promise of, the miscommunication that dashes it, the cheaters, cuckolds, fetishists, the rogues, the newlyweds or the dreamers--sex as an act seems to be out of reach in more cases than not. So many of Peek's people have the desire and ambition and turn out to be their own worst advocate.

LK: Which is your favorite short story in the collection: "Hard Times" or Peek? Why?

PB: You ask which is my favorite story in the book--the title story "Peek" or the micro-story, "Hard Times". I loved writing "Peek," a total fabrication of an apartment complex in New York with buildings facing each other and every day at 6 pm the residents of this complex stop what they're doing and, using telescopes or binoculars, peek into each other's windows. The story becomes more complex and I feel that it was a good lead into the collection and the best title.

"Hard Times' on the other hand was an emotionally more difficult story for me to write. Having grown up in the projects of a large city, I often saw children being farmed out to family members in other states who could take better care of them. My friends in these families never showed remorse of spoke of the missing child or children when this happened--it was an expected way of life for people who had too many kids and kept having more. Combine that with seeing people's furniture piled in front of their house by the sheriff because they got evicted for lack of rent payment and "Hard Times" was born.

People sitting forlorn on their stoops and others embarrassingly sitting, guarding their possessions on the curb are sadness' remembered forever. And for those reasons I would have to pick my child "Hard Times" over my other child, "Peek" as my favorite story.

LK: If you could spend one day inside one of the stories from you book, which one would it be and why?

PB: Choosing which story I would pick to spend a day inside of took longer to decide than I thought it would. In the end, "Who Knew" was the clear winner. It encompasses the essence of what "Peek" is all about and shows that peeking can have its rewards and its downfalls if the "peeker" is caught. It promises hope to the lonely and shows the peeker caught in the act has not been fooling anyone but himself and instead of being embarrassed or ashamed he looks at his predicament as one with hope for the future. The "peekee" in this story, also plays a role more significant than just being ogled. And once again, it shows that New Yorkers, and people in other cities, are less star gazers than people gazers.