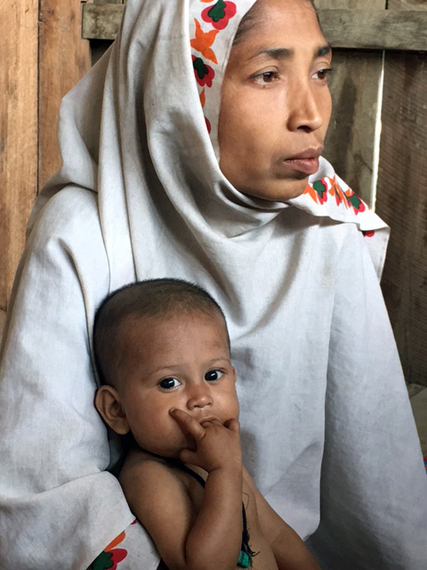 The five mothers sitting on plastic chairs beside me were decidedly cool while I sweated in the heat that was building, even on what was a relatively cool Myanmar morning. They were dressed in beautiful saris and long, colorful skirts and headscarves, and smiled widely in welcome. Through translation from English to Burmese to a local dialect of Arabic, I explained I had come from the U.S. to visit the Save the Children program here in this camp for internally displaced families and wanted to hear their stories... stories of how they came to be in a teeming, dirty camp only six miles from their homes in the nearby town. Homes they had not seen now for more than three years -- homes that no longer existed after they were forced to leave.

One by one, they told me about their lives before -- as a rice trader, a bicycle repair shop owner, and one lady whose livelihood was the family coconut mat and bamboo shop. Several were at home with young children. They described a past life of simple pleasures and peace, room for their children to grow up and a decent school for them to attend. Although all of them were poor, they worked hard to have enough to send their children to school, get medical help when needed, and make sure they had a childhood. That was before, what they call, "the events."

Inside the camp, much of that life was gone. These mothers were no longer allowed to work and support their children. They survived now on aid -- food rations, informal education and very basic medical services provided by donors from their and other governments, and delivered by agencies like Save the Children. Basic bamboo and tin shelters jammed together along a deeply rutted road was now home for these families, and tens of thousands of others. Blog

Hamida described how the only way she could continue to provide nutritious food for her four children was to take part of the dry ration of beans that was meant for her and sell it to buy a few vegetables and eggs. She was struggling to keep her eldest in school, a daughter she adopted in the camp when the girl's mother died in pregnancy, and was determined to get her into the 1st grade and beyond. Kahin Mer Cho had a 3-year-old and a 5-month-old, both born in the camp, both born at home. She described her intense fear when her first child was born--at that time there wasn't access to medical services in the camp and she worried something would go wrong. She told me even today there are others not as lucky as she was, who were losing children and losing their own lives in childbirth.

Another mother, speaking quietly, described how she had to take her oldest, a girl who had gotten through the 6th grade, out of school because she could not afford the very basic supplies for her to stay. When I asked if she had a plan for her daughter, she said she wanted to get her some training, perhaps in sewing with a machine, but the teenagers are not allowed to leave the camp so she now stayed at home and helped with household chores.

As I listened to these stories of life before and life now I was struck by the intense impact on these mothers -- but mostly on their children. If things don't change, a whole generation will grow up here in this camp. Despite the incredibly hard work of my colleagues at Save the Children and many others, these children will have limited educations, suffer from high rates of malnutrition and stunting, with many girls being married off early and having children while they are still children themselves. Sadly, some families will give their children up to traffickers to get them out of the camps, a situation that most likely will lead to horrific exploitation.

The reason for the violence against these mothers, the hatred that forced them and their families from their homes, burning everything they ever had, is a complicated one. In my short time in Rakhine I could only get a shallow understanding of century old tensions between the Buddhist and the Muslims that caused the flares of violence over three years ago now. Violence that has added hundreds of thousands of people in Myanmar to the global flood of displaced people - the largest since World War II.

I would not begin to tell you I understand the deeper issues and history. But I do understand the suffering I saw in the children I met in the camps. No child deserves to have their future taken away and all children have the right to a decent education, to survive and to thrive and to be protected from abuse. And every mother's heart is broken when she can't provide it.

The hope is in the new government here in Myanmar, one just forming and still struggling to lead. A government built on the foundations of democracy, rule of law and basic rights for all, with leadership that also lived through those things being taken away. The five moms I sat with in that dusty camp need access to those things just like every other person in Myanmar. There are many on both sides working toward that goal, and it will take care and time, but the futures of the children I met should not be the price to pay to get there.