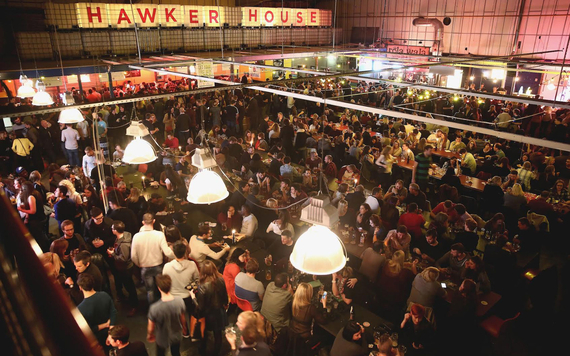 One of the best things about the UK is that most museums are free. Start your Saturday in Holborn at the British Museum, admiring the collections along with the building's impressive tessellated glass ceiling.

From there, stroll down to Covent Garden: one of London's most famed areas, though a tourist trap, is worth a wander. Walk through the Piazza, then around the web of Seven Dials (seven quaint shopping streets that connect at a small roundabout), and don't miss Neal's Yard--quite possibly the quaintest, most colorful courtyard in London.

A short walk away in Aldwych, Lundenwic is the perfect lunch spot. It's a trendy, minimalist all-day cafe, which serves fresh salads, gourmet toasties, and great coffee. The roasted broccoli, cheddar, almond, and chili toastie ($8) is sure to hit the spot, washed down with a pick-me-up espresso ($0.75).

Feeling fueled, head at a leisurely pace down The Strand, taking note of the iconic Savoy Hotel as you go, before eventually arriving at Trafalgar Square. Walk down Pall Mall to Buckingham Palace, or hang a left to see Big Ben and Westminster Abbey up close.

Walk along the Southbank to the Tate Modern. Spend a couple of hours admiring the exhibitions (it's one of the best galleries in the country, whether you're an art aficionado or not), before heading up to the cafe on level 6, where we suggest skipping the coffee but admiring the stunning city views from its terrace.

Cross Millennium Bridge, admiring the quintessential London skyline views as you go, and on the other side, it's the mighty St. Paul's Cathedral.

It's time for dinner. Jump on the DLR to Canada Water, which plays host to Hawker House, the latest incarnation from Street Feast, an organization that can be credited with revolutionizing the London street food scene. Hawker House is a late-night indoor market in a converted warehouse, with 14 food traders and eight bars.

You're spending Sunday in East London, in neighborhoods that have changed and diversified a lot in the last 10 years, with the arrival of craft coffee shops, hipster cafes, and designer fashion boutiques. There's a buzz in the air, the crowd is young, and when you pick the right places, your money can go far.

After a long lazy lie-in, drag yourself out of bed and head to Beigel Bake on Brick Lane--a real institution that, along with being a favorite among locals, draws crowds from far and wide who flock to it 24 hours a day for its impressively cheap bagels. Though its salt beef bagels are a common favorite, go for the equally delicious salmon and cream cheese combo, and you'll get change from $5.

After eating, walk down bustling Bethnal Green Road--lined with fruit and vegetable stalls and dazzling sari shops--to the V&A Museum of Childhood. Don't be fooled, this isn't a museum just for children. It's a nostalgic spot for adults, too, with all the favorite toys from your childhood on display.

Back in Shoreditch, potter along Redchurch Street, the neighborhood's chicest street, where you can window shop the likes of A.P.C, Sweaty Betty, and Aesop. Marvel at the wonderfully colorful fresh produce outside Albion Cafe, before popping into Labour & Wait, a small but perfectly formed homewares boutique, full of heritage brands, luxury stationery, and en-vogue Falcon enamelware.

It must be lunch time, and on Sunday, Brick Lane is buzzing with international food markets. Expect crowds. Take cash. Then choose from everything from dim sum, to curry, sushi, Lebanese, and Thai. You'll get an overflowing plate and change from $10.

Next, head to Columbia Road Flower Market, London's favorite, where you'll join the hoards squeezing through the stalls, handing over cash to heckling East End traders in return for giant, paper-wrapped blooms. No East London Sunday is complete without such a purchase--even if they are only spending a couple of nights in your hotel room.

Later, perhaps after dropping your flowers at your hotel, and putting your feet up for a quick half hour, it's time to eat. Get out Google Maps for directions and hop on a bus (from $2.30) to Exmouth Market, an atmospheric street that's home pretty much entirely to restaurants. There's all sorts, from seafood restaurants to Thai, and Turkish. Our favorite--and one of the cheapest--is Pizza Pilgrims, the newest addition to the street, but one with a big cult following. Oh, let the night be merry.