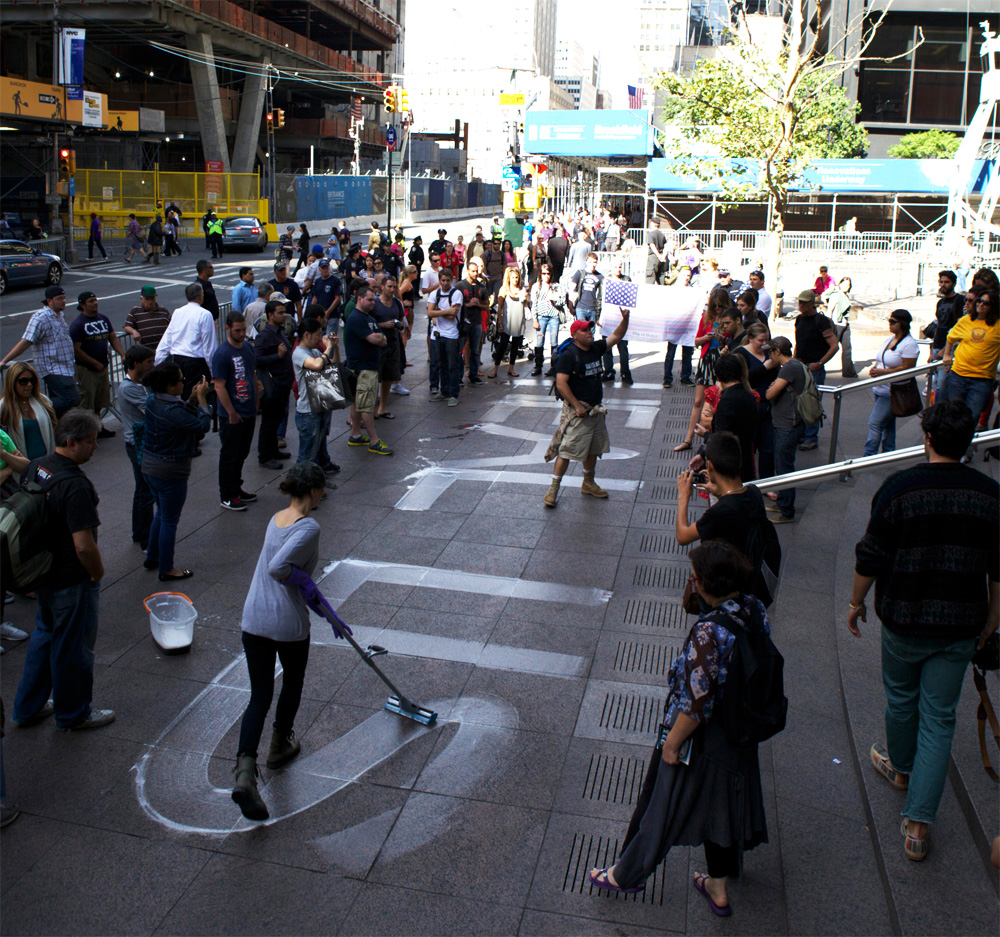 Heal Us/ Heal U.S. performance. Courtesy of the Artist.

On Tuesday, September 11, 2012, I grabbed my mop, bucket and cleaning supplies and set off for Ground Zero with no particular idea of how those supplies would be used. I explored the area for quite some time and eventually found myself on the west side of Zuccotti Park. Among others, an Iraq War veteran, a 9/11 first responder and a family member of a 9/11 victim were embroiled in a tangled argument about war's wickedness, Wall Street's greed, WTC conspiracy theories and the need to honor the victims of the tragedy by abstaining from arguing for just one day a year. This day. The air was thick with words of trauma-induced anger and the kind of verbal lacerations which often precede flying fists. My first instinct was to keep my distance.

On the night prior to the anniversary, I walked along the Hudson River near Battery Park recalling that tragic day eleven years ago and the horror, violation and anger I felt as I watched those steel birds crash into buildings filled with thousands of innocent men and women. The evening stroll eventually brought me to the north side of the 9/11 Memorial site. People gathered there silently to ponder the annual Tribute of Light installation. I immediately noticed what appeared to be thousands of pieces of white confetti curiously dancing about within the effulgent twin towers. A closer study revealed not confetti, but hundreds, perhaps even thousands, of white birds soaring within the columns of inordinate daylight reaching toward the heavens.

I recently embarked on my 90-day performance, True Light, an endurance art work which explores the effects of fasting, prayer, meditation and silence upon my creativity as an artist. The 11th day of the performance incidentally coincided with the eleventh anniversary of September 11th. The inspiration to create a performative intervention for the commemoration was commanding and persistent, but also terribly vague. On the evening before the anniversary, I received a mental image of a mop and bucket, but nothing more. I realized that the process of True Light was taking me further into the improvisational than I had ever been. Frankly, I was tentative about contributing anything at all, but knowing so little about what that would be was terrifying. I knew the anniversary deserved the greatest degree of reverence and sanctity, the kind found in hushed places of worship, such as religious sites or the great temples of modern contemplation -- art museums. Yet, at this moment in history, there's a palpable disjuncture between the society and both of these forums. Many people are seeking connection with the sacred in less formal places. Spaces without walls suddenly seem to hold a great deal of promise for both faith and art. So, with a little fear and trembling, I followed my inspiration to the sidewalk.

At the precise moment I prepared to walk away from that scorching disagreement in Zuccotti Park, the familiar voice of the creative Muse spoke, clearly indicating that this would be the place. I reluctantly set down my cleaning supplies amidst the excruciating sound waves. Drawing the roller sponge mop from soapy water, I placed it on the pavement, feeling both frightened and foolish. It was at that precise moment that the words "HEAL US" rang unquestionably in my mind. I proceeded to write them in block letters using the grid of the stone pavement as typographical guidelines. The altercation progressively grew more abusive as the crowd migrated directly over the words I had scrubbed into the pavement. The stone was hot from the blazing noonday sun, and the soapy letters quickly evaporated. Once the phrase was completed, I immediately returned to the beginning and rescrubbed over the letters, making them visible once again. The two primary ringleaders then jerked toward one another and exchanged threats of physical violence; I found myself standing in between them, preparing to embark on a new brushstroke. A man from within the crowd shouted, "Don't hit the girl! It's always the innocent who get hurt in these fights." I paused, took a deep breath, and gingerly continued to mop and scrub between them, my gaze fastened to the letters on the sidewalk. A couple of guys in their early twenties approached the scene holding an American flag, defining the left perimeter of the crowd. The fighting continued, and the scenario felt like a kind of tragic multimedia symphony.

The quarrel eventually lost momentum and the crowd dispersed. For the next eight hours I repeatedly washed that prayer into the pavement as a steady stream of passersby ranging from boisterous school kids to Japanese tourists to a decorated public safety officer paused for a moment of reflection before continuing on their way. A curious young man approached me and asked, "Are you saying, 'Heal Us' or 'Heal U.S.?'" "Both, I guess," I replied. He nodded, saying, "Oh, cool."

As I scrubbed the phrase into the stone one last time, a man dressed in a three-piece suit and built like a linebacker approached and introduced himself. "My name is Chris. I've worked in this neighborhood for many years. I realized last night that I am finally ready to face the pain of what I experienced here during 9/11. But I was surprised to find that I am still holding on to so much anger." He began to weep and then said, "As I came out of the office this evening, I saw these words and they really helped me. Thank you." We shared a few tears and words of reflection on finding the strength and the courage to heal and then hugged before parting ways. I wandered home with my mop and bucket in hand, completely astonished. 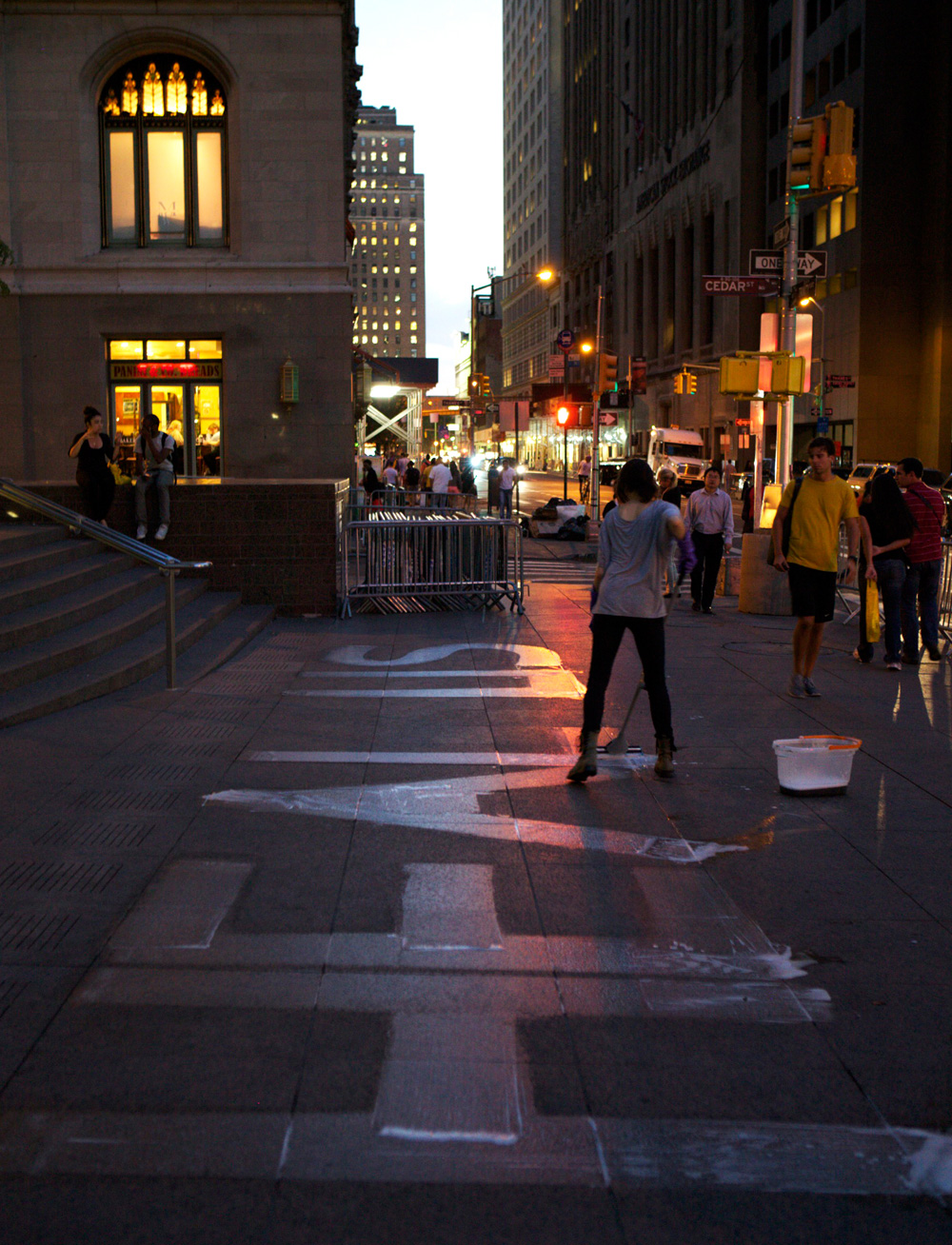 Heal Us/ Heal U.S. performance. Courtesy of the Artist.