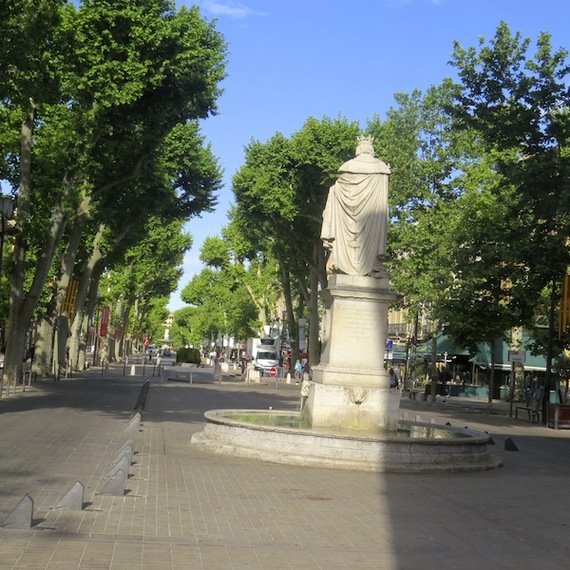 I've never much cared for eating out alone, even when I tuck a book under my arm to take with me. But tonight I rather enjoyed it. And I was in no hurry to leave Bistrot des Philosophes, a restaurant my wife Kathy and I never visited during our five months in Aix-in-Provence in 2014.

Perhaps I took my time because of the perfectly pink magret de canard in front of me, smothered in a tasty fig sauce. Or perhaps it was because of the delicious and gargantuan creme brulee caramel dessert, almost a meal in itself. Or the ambiance of candlelit tables and soft American jazz (my table faced a framed picture of a young Bob Dylan, puffing on a cigarette). Or then maybe it was my charming waitress, who wore sneakers, stretch pants and an apron, her hair tied in a top knot. She spoke only French and showed great patience with mine, which is really rusty, particularly when trying to speak it on three hours of sleep in the last 36 hours.

Then again, two glasses of Bandol, one of Provence's best rosé wines, for just $6.75 apiece had something to do with slowing the meal down. (The total bill was $47 and well worth it.)

Now I can pass out with a smile on my face. (No, I'm not drunk. Just really, really tired.)

I truly love this city, walking its streets, watching the people who pass by. And with 10 Emerson College students landing tomorrow, I knew that this first night was the time to linger, to taste the slow lane if just for a moment.

I look forward to seeing Aix through the students' eyes. To sharing their excitement and, I hope, imparting some of my own in this city that seamlessly melds old and new on every street and square of its old town.

The authors Jean-Benoit Nadeau and Julie Barlow got it right in their two-year study of French culture, "Sixty Million Frenchmen Can't Be Wrong." In France, they write, "it is impossible to disassociate the past from the present. There is no clear line to divide ancient from modern in France and what goes for architecture goes for the people, too... It's as if they live in the past and the present at the same time. Yet it took us awhile to figure out what that actually meant."

On this, something like my 15th visit to the country, I'm still trying to figure out what that means. But there is magic here, even in today's difficult times. That I do understand.

More:
travelProvence
Newsletter Sign Up
An essential daily guide to achieving the good life
Subscribe to our lifestyle email.
Successfully Subscribed!
Realness delivered to your inbox