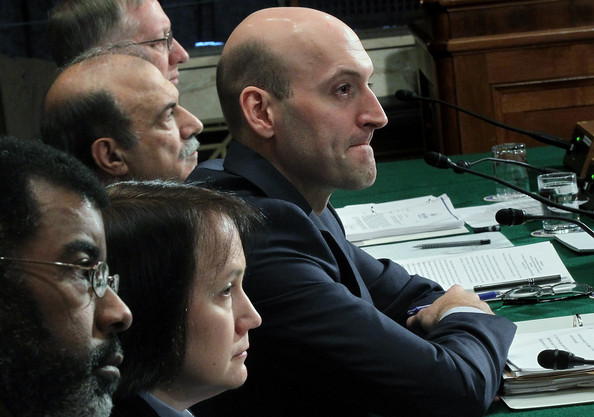 CSPAN viewers were treated to an unusual spectacle last month. For two days, a federal agency aired its dirty laundry in public. Both the House and the Senate held hearings on December 14 and 15 respectively that wound up focusing on a bureaucratic tiff between the chairman of the Nuclear Regulatory Commission and the agency's four commissioners.

The spat in question came to a head when the commissioners sent a letter on October 13 to White House Chief of Staff William Daley charging that Chairman Gregory Jaczko was causing "serious damage" to the agency and "creating a chilled work environment." In response, Jaczko, in a December 7 letter to Daley, denied the charges and alleged that the commissioners -- George Apostolakis, William Magwood, William Ostendorff and Kristine Svinicki -- had "loosened the safety standards" for U.S. nuclear power plants.

The hearings, which at times resembled a schoolyard scrap, generated a lot of heat, but not much light. Depending on who you want to believe, the dispute could be largely due to a management style problem that would better be addressed by organizational development consultants than congressional hearings. On the other hand, the split may be more philosophical than personal. A critical vote the five took on December 15, the same day as the Senate hearing, suggests that it is at least partly the latter. For the seventh time over the last three years, Jaczko was on the losing end of a 4-1 vote that went against a proposal that would have strengthened plant safeguards.

The good news on December 15 was the commission as a whole approved the highest-priority safety recommendations made by the agency's Near-Term Task Force, which was created in response to the Fukushima Daiichi nuclear accident. Those safety enhancements included reviewing earthquake and flooding threats, upgrading emergency equipment, and requiring plant owners to strengthen backup power capacity to cool reactor cores and spent fuel pools in the event of a loss of offsite electrical power. It was the loss of offsite power -- a "station blackout" -- triggered by the one-two punch of an earthquake and a tsunami that led to reactor meltdowns at Fukushima.

The bad news that day was the four commissioners -- over Jaczko's objection -- declined to consider all of those safety upgrades collectively as necessary to ensure "adequate protection" of public health and safety. Instead, they voted to reserve the right to consider each proposed new safeguard separately under the agency's rules on "backfitting," the term for when a nuclear plant is modified or its operating procedures are changed. According to the rule, if the commission does not consider a proposed regulation necessary for adequate protection, the commission "shall require the backfitting of a facility only when it determines ... there is a substantial increase in the overall protection of the public health and safety ... and that the direct and indirect costs of implementation for that facility are justified in view of this increased protection."

A case-by-case approach under the backfitting rule could doom some of the Near-Term Task Force recommendations. As my colleague Edwin Lyman pointed out in a December 22 blog, "NRC's Post-Fukushima Response: Going in Circles?," the fact that the NRC has not modified its cost-benefit analysis guidelines to reflect the lessons of Fukushima means "there is little chance any regulatory action based on a post-Fukushima understanding of risk would pass the test."

Lyman, a physicist with the Union of Concerned Scientists' Global Security Program, provided an illustration that shows why the December 15 vote was so wrongheaded:

One of the Fukushima Near-Term Task Force's recommendations is to modify emergency planning guidelines to address the potential for multi-unit [multi-reactor] accidents. Yet the analyses that would be used to assess the risk reduction associated with this upgrade are based only on single-unit accidents. So in effect, the current framework assumes that the risk of a multi-unit accident is so small that it is essentially zero, and does not consider the potential for a single event to affect multiple units. Therefore, there would be virtually no risk reduction associated with the emergency planning upgrade and it would fail the cost-benefit test.

One might think, therefore, that the NRC should modify its cost-benefit analysis guidelines to incorporate lessons learned from Fukushima before using such an analysis to assess the costs and benefits of the other recommended upgrades to safety requirements. Indeed, the Near Term Task Force considered development of a new post-Fukushima regulatory framework to be its top recommendation.

However, the commission ordered the staff to put such an effort on the back burner, effectively leaving it to be resolved only after all the other recommendations had been addressed. This has created a pattern of circular reasoning that could endanger the implementation of all the other proposed actions, and could leave the NRC chasing its tail for years to come.

Lyman pointed out that the NRC has wide latitude to determine what constitutes "adequate protection" and has authorized far-reaching regulatory upgrades in the past, most recently after the September 11, 2001, terrorist attacks. Indeed, the Near-Term Task Force, which was comprised of NRC technical staff members, cited the agency's response to the 9/11 as a model for handling its post-Fukushima recommendations.

It should be noted that even though the post-9/11 upgrades got the "adequate protection" treatment, it still took 10 years for the agency to prod all U.S. nuclear plants to finally implement them. Subjecting each post-Fukushima recommendation to a cost-benefit analysis likely will slow the agency's already painstakingly sluggish work to a crawl.

Each of the proposed safeguards now "will take months to years of NRC staff time to develop [and] will be subject to the whims of the current or future commissioners," Lyman concluded. "... The bottom line is the [December 15 vote] could potentially undermine the NRC's ability to promptly address critical safety vulnerabilities at U.S. plants that could well result in a Fukushima-scale disaster occurring here."

Elliott Negin is the director of news and commentary at the Union of Concerned Scientists in Washington, D.C.