If you Google "mood swing," the first image you'll see is my daughter. She's in a playground swing, her face scrunched up in a grumpy pout. She is playing for the camera. It's an impersonation of anger. But most of the millions of people around the world who've seen the photo think she's genuinely pissed off, and I imagine this makes them love the image more, and, I imagine, makes them want to share it more, and so our daughter continues to make her way around the Internet, a cycle that repeats itself.

We were away for the weekend with our two children, 2 and 5 years old. We'd rented a stuffy mildew-scented beach house in Rhode Island and, to our dismay, there was no Wi-Fi access. My husband and I were both working while on vacation; I was anxiously waiting to hear back on final edits for my novel, Cutting Teeth, and I discovered that if I carried my laptop to the end of the driveway and moved it around, like a modern-day divining rod, I could catch one of the neighbors' Internet connections. I was down at the end of the driveway, waving my laptop in the air, when I saw someone had posted on my Facebook page. It was a photo of my 2-year-old daughter in a swing. "Isn't this your daughter?" my friend asked. Of course it is, I thought. My husband had taken the photo a few weeks ago and we had both shared it on Facebook where it had been a hit, earning many likes and comments on our daughter's adorableness, all of which, I am ashamed to admit, had put me in a good mood that day. But when I examined this photo, I spotted the big block letters -- MOOD SWING -- at the top of the image. My friend had found the image on a meme site. 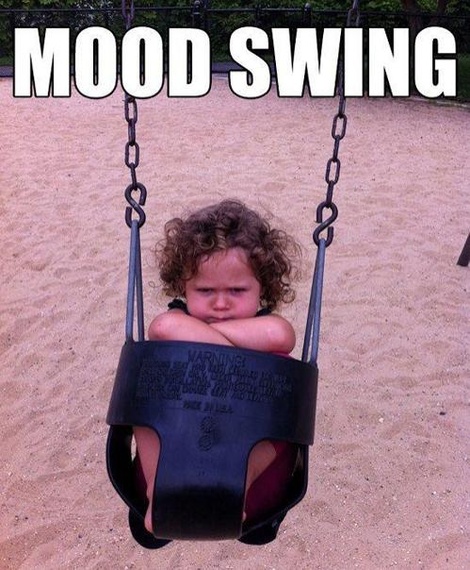 I had no idea what he was talking about, so I Googled "meme" and, according to Merriam-Webster, a meme is "an idea, behavior, style, or usage that spreads from person to person within a culture." I went to the meme site, Cheezburger.com, where my friend had spotted the photo. Sure enough, there it was. I emailed the site's handlers, asking them to take it down. Problem solved, I remember thinking.

When I returned to the beach house, I mentioned the photo to my husband and we laughed about it, promising ourselves we'd comb through our Facebook friends and delete anyone we didn't actually know. We had no idea that the photo had already been on Reddit for days, and was rising to the top of the most popular memes chart. Millions had already viewed and shared our daughter's pout.

Later that day, Facebook friends began posting links to the MOOD SWING image on my page, all leading to the same meme on different sites. I was running out to the end of the driveway every 20 minutes to check for new posts, and each time there were new sightings of my daughter's image by my social media friends. They were outraged. My husband and I had yet to feel worried about the situation, but our friends, especially those who were also parents to young children, and, I should add, had been adoring our daughter's sweet online personality for the past two years, were offended by what they saw as the violation of our privacy, plus the creep factor of some unknown person taking possession of our baby. If my friends were distressed, then I should be too, I told myself, feeling ashamed that I'd been so calm. How could someone steal from us like this? The nerve!

Several friends had asked if they could contact the meme sites on my behalf and demand the image be removed. I agreed, although I was already beginning to doubt the photo could be reclaimed when it was spreading with every hour. But I didn't want to look like a bad mother, one who didn't care that her daughter was splashed all over the Internet, so I gave them my blessing.

Over the next 24 hours, I spotted the photo of my daughter in my Facebook timeline again and again, reposted by the pages of parenting magazines, blogs and meme sites, and even shared by friends who didn't know that was my daughter in the swing. Our friends' disapproval, plus the multiplying of our daughter's face, plus the mystery of the photo thief, began to build like an approaching storm, until it was all we spoke of. The photo. The photo. It was a ruined vacation. The children spent too much time in front of the television while my husband and I took turns waving the laptop at the end of the driveway and driving to the local Starbucks to use their Wi-Fi. The fact that we were away from home, away from our reliable online connection, made me feel as if I had even less control over the situation. I blamed myself. I should have known better. I knew there was no such thing as privacy online, and that each time I posted a photo of the kids, I was responsible for the results. Still, I used my fury as a shield, deflecting my guilt by focusing on what one specifically outraged mom-friend had called "an invasion of your precious family!"

My husband posted a message on his Facebook page urging the culprit to come forward and reveal him- or herself. He explained that we just wanted to know the origin of the initial post. Where the spreading fire burned the hottest, so to speak. The next day, my husband's 20-something male co-worker emailed him and sheepishly explained that it was he who took the photo and posted it on Reddit. He claimed he was just looking to score Reddit "karma points." He had photoshopped MOOD SWING across the top of the photo -- a clever joke one of my husband's friends had posted in a comment on the original post. He included the link to Reddit and promised he'd do his best to have the photo taken down. A promise that would prove impossible to keep.

It was my first visit to Reddit. I'm guessing I was born at least half a decade too early to have experienced the meme explosion that is now a part of everyday humor. It was difficult to decode at first, the jumble of posts and subposts and comments that made up Reddit's main page. My daughter's photo was at the very top, having received hundreds of thousands of points, and hundreds of comments. Many were harmless, mostly LOLs and LMFAOs, and observations like, "That kid woke up and said You can't make me have fun!" But there were also comments like "Her future husband is in for a good time..." and "What a bitch!" And a 40-post-long debate about whether my daughter was a boy or a girl, even analyzing the shorts she was wearing. There was no information about her name, or the origin of the photo, but as I watched so many strangers discussing my daughter, calling her "ugly" and "mean," it made me, a normally anxious mom, feel as if danger was lurking around every corner.

Our efforts to erase the photo from the Internet were in vain. As far as I can tell, it will live there forever. After a week or so of emailing back and forth with various meme sites, parenting magazine sites, and Reddit, we surrendered to the inevitability of the Internet. Surprisingly, once I accepted that the photo was out of my control, I felt better. Now, almost two years later, within the safety of retrospection, I even feel a bit of pride when I whip out my phone, search for "mood swing," and display a funny and adorable photo of my daughter. It became a great story to tell -- Did I tell you about the time the photo of my daughter went viral? A year after the photo was first shared, when Honest Toddler, the Twitter handle whose popularity earned a major book deal, and one of my favorite parenting sites, posted our daughter's meme on its website, I called my husband and shared my glee quietly.

The photo still pops up in my Facebook feed, and my husband recently did a double-take at work when he walked past a cubicle and recognized our daughter, poster-size, hanging over his co-worker's desk. She had no idea the moody little girl was our daughter and apologized, promising she'd take it down. My husband laughed and told her not to bother.

Have I learned anything from the experience? If I have, it isn't reflected in my daily posts on social media. Photos of my children and sweet anecdotes from our daily life. There were a few weeks when I used the initials of their first names instead of their full names -- an attempt at partial privacy. But I realized anyone, anywhere, could do an online search and find everything there is to know about my family. I want to be one of those parents who have made (and stuck to) their vow of not posting photos of their children online so that every creep in the world has potential access to them, but isn't it too late for that? How would I erase all that I've already (over) shared?

Although I've come to embrace the idea of parenting online, memes and all, I still chastise myself for knowing that when I post a photo of my daughter on Facebook, it will be "liked" three times more than my posts that link to articles or essays I publish. When I meet new people, one of the first things they say is, You're the mother of the adorable children on Instagram! As if my kids actually live online. Which is true, in a way. Am I not crafting a sweet little home for them on the Internet? A picture-perfect world full of smiles and silly expressions and images that imply joyful adventures -- a landscape made dreamy with the aid of Instagram filters. The online world offers parents infinite choices from which to craft a narrative of our children, and of ourselves as parents, and it is the promise of this seemingly "perfect" parenting identity I find almost impossible to resist.

Julia Fierro's novel, Cutting Teeth, about the complicated (and often comical) contemporary parenting experience, is out now. Julia can be found online at juliafierro.com and on Twitter @juliafierro.

Author of "Cutting Teeth, a novel"