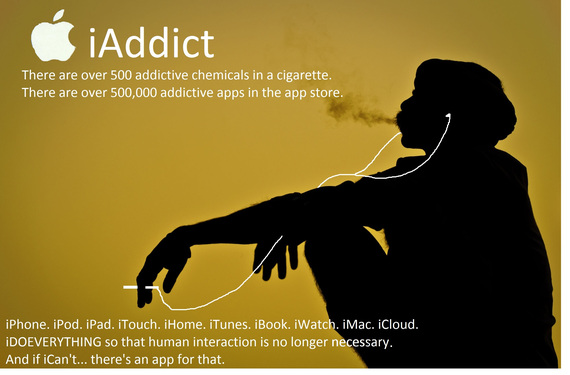 Go into the archives of advertising and pick some ad at random. What will impress you immediately is how text-heavy advertising was until about 15 years ago. Pretty images, sometimes wonderful images, and text. Lots and lots of text.

We can guess at the reasons for the change in advertising strategy, beginning with the shortened attention spans of audiences. Whatever the cause, marketers have pared away copy and now look to images to carry most of the burden of their messages, hoping hard that less is more.

Certainly there were harbingers of the evolving dependence on images. There was the Got Milk? campaign that started in the Eighties (which, no matter what you may remember, featured a lot of text). There was Apple's campaign for its iPod in the early 2000s, which featured nothing more than silhouette of some people dancing.

What was once avant garde is now mainstream. Fitbit, for example, doesn't even say what its product does; it just points to pictures of people using it. Coca-Cola, which recently launched in its "one brand" campaign in support of all its products under the banner "Taste the feeling," wants us to taste the feeling by looking at a rich collection of pretty images. Abercrombie & Fitch sells clothes, and yet is known for advertising that features naked people.

Image instability. Aspiration is what's for sale: Buy our product and your life can look this great. How ironic that this move toward text nakedness is happening just at a moment when it's harder than ever to control the message embedded in an image. Images now destabilize the moment they are released into the digital wild.

Ever since the first images were painted on a cave wall we've understood that what we see is a representation, that no humans look that good drinking a Coke in front of a pastel sunset. At the same time we search the image for truth, or anyway for some personal meaning. This was true whether the image was static like a photograph or moving like a Hollywood film.

Now we don't know what to think.

Take the example of police body cams. Their intended consequence is better behavior from police. Cops, though, complain that even an unaltered digital video can be misunderstood by someone who wasn't physically present when an arrest was made. In other words, the subject of the image wants to attach their narrative to it. And the audience won't let them.

Or consider native advertising, for which misunderstanding context is precisely the point. By creating digital ads that look like the surrounding content on a news website, native ads borrow the credibility of the context surrounding them. (Considerations of the eventual reputation damage to that credibility can be saved for later.)

Spare a thought for the sellers of things--ideas, music, stuff--in this destabilized world. Once they believed they knew their audience. They assumed everyone was white, and everyone was married. Now, what were once sub-identities are more pronounced in the culture, enabled in every sense by technology - especially technologies that carry images. These sub-identities are where the passions live.

Expectations of interactivity. From a seller's perspective wordless images have a lot going for them. They can be mass or they can be micro. They have the power to capture the moveable moment. But show that moment over and over and its meaning is soon exhausted. And digital images are something strangers can poke at. They can change any image with ease to give it a meaning of their own.

Our devices and our new relationship to images have created expectations of interactivity. That doesn't have to be a bad thing. Maybe the cleverest strategy is to presume the evanescence of the image you create and graciously accept the boost to awareness appropriation provides.

How many parodies of the Got Milk? or Just do it campaigns have you've ever seen? How much damage have they done to the brands that spawned them--any? If they've had an effect it's likely been to amplify the originals. Advertisers with a brand to build should congratulate themselves when they build the kind of awareness parody depends upon to succeed.

The focus should be on what works, trends be damned. There might be no better example of this truth than Omega watches. Only about 500,000 Omegas are sold around the world every year, and those to exceptionally wealthy buyers. Omega understands that its very conventional strategy of a black-and-white print ad portraying celebrities wearing one of their watches suits the brand well. And it would not have looked out of place 100 years ago.

They still don't use much text, though.

"Approximating the Truth"
It has become commonplace in the digital world to talk about the wisdom of the crowd-the aggregated opinions of everybody. The problem is that the crowd isn't everybody. The crowd is pockets of interest, loud voices, competing truths.

"No More Moralizing About the Gig Economy"
The gig economy is developing faster than anyone imagined. Jobs -- or, more specifically, tasks -- that no one imagined could be automated or made digital even five years ago are becoming commonplace.

"Seeing Acquisitions as Power Transfers"
When an animal eats a vegetable it transfers the latter's power to itself though they occupy different categories. That's what good acquisitions do. It's what conventional mergers don't.