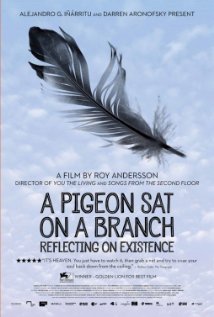 The title of Roy Andersson's A Pigeon Sat on a Branch Reflecting on Existence refers to a poem that is being read on stage by a little girl at a school event. When quizzed by her teacher about what the pigeon is thinking the little girl says that it's thinking it doesn't have enough money. A Pigeon Sat on a Branch Reflecting on Existence is a philosophical comedy, Monty Python meets Kierkegaard, with the title of Damien Hirst's famous sharkwork, "The Physical Impossibility of Death in the Mind of Someone Living," thrown in for good keeping. It starts off with three vignettes all lumped together under the rubric "Meeting With Death." In the first a man dies of a heart attack, as his wife, oblivious to what is going on, cooks. In the second, the son of a dying old woman tries to wrest a bag full of valuables from his mother, whose intent is plainly to take her wealth with her to the grave; in the third another man dies in a cafeteria. The problem is what to do with the food which has already been paid for? The stars of the show are a pair of Vladimir and Estragons, Jonathan (Holger Andersson) and Sam (Nils Westblom). They're salesmen whose trove of novelties includes "vampire teeth with extra long fangs," and an item they keep saying they "have faith in," " a mask called "uncle one tooth." Their business plan is to "help people have fun," only they can't escape the fear of death, with one tormented by a song (he can't get out of his head), about going to heaven to see his parents. Among the other characters are a uniformed worker who's constantly being stood up at a restaurant, a flamenco teacher whose leering sexuality recalls the surrealist classic Un Chien Andalou and the historical character of King Charles XII who shows up in a present day bar in search of a bathroom. A character sitting in a rathskeller cries out "I've been greedy all my life. That's why I'm so unhappy." Around him the staff begin to close up the place as if nothing untoward were happening. "I'm happy to hear you are doing fine," functions as a kind of Greek chorus as varying grotesqueries are perpetrated, amongst them the torturing of a primate. Towards the end the movie tips its hat to colonialism, as slaves are whipped and then forced into a rotating oven where they're cooked to death. The scene is being witnessed by a group of tuxedoed aristocrats holding flutes of champagne. The locution of A Pigeon Sat on A Branch Reflecting on Existence also recalls the famed philosophic conundrum about "a leaf falling in forest with no one watching," but the intention of A Pigeon is far less benign. As imaginative sequences give way to adolescent outrage at the meaninglessness of existence, the film becomes its own best parody. Andersson's pigeon needs to shit or get off the pot. Right now it occupies a no man's land between philosophy 101 and watered down Lars von Trier. Are the questions A Pigeon Sat on a Branch Reflecting on Existence raises difficult or is the disquisition merely oppressive?