A ring that graced the block at Sotheby's Geneva earlier this week has shattered the record for any jewel sold at auction, twinkling past its presale estimate of $27-38 million to fetch a flashy $46 million. The gem was snatched up by London jewelry dealer Laurence Graff, who offered his closing bid over the phone with Sotheby's Asia chairman Patti Wong bidding on his behalf. Put up for sale by a private collector, the ring features a dazzling 24.78-carat emerald-cut diamond of a "fancy intense pink" hue, which is the actual classification given its color by the Gemological Institute of America. The auction raised a total of $105 million, exceeding presale expectations of $67-97 million.

This pink diamond isn't the only notable auction sale this month. In the last month , world records have been set for an antique Chinese vase, a Matisse, Middle Eastern art, and a Lichtenstein. 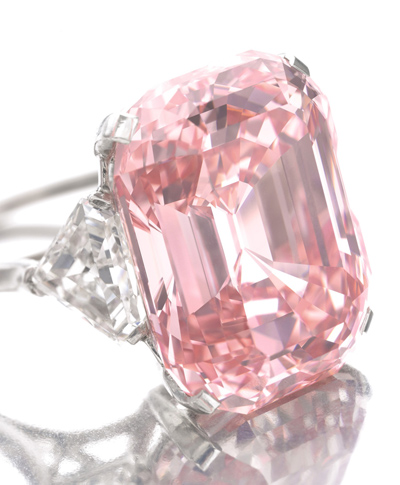 This diamond ring sold for $46 million at Sotheby's Geneva earlier this week to London jewelry dealer Laurence Graff, who has named it the "Graff Pink." / Courtesy Sotheby's

When bidding on the stunning lot closed,Sotheby's international jewelry department chairman Dave Bennett immediately announced the world record to an eruption of applause, Sky News reports. Of the gem, last seen on the market 60 years ago when it was purchased from famed jeweler Harry Winston, Graff states: "It is the most fabulous diamond I've seen in the history my career." And Bennett agrees. "It was simply one of the most desirably diamonds I have seen during my 35-year career at Sotheby's," the Sotheby's chairman said in the auction house's statement.

The diamond -- an exceedingly rare specimen, as there is a noted scarcity of pink diamonds of more than 20 carats -- has been proudly named the "Graff Pink" by its new owner. In paying the astronomical sum, Graff broke his own previous record for a gem at auction, which he set in December 2008 when he paid $24 million for the 35.56-carat grayish-blue "Wittelsbach Diamond" at Christie's London.

He then re-cut that jewel, raising cries of alarm from gemstone purists who deemed his act that of a diamond vandal. According to Sotheby's, the "Graff Pink" bears a flaw unnoticeable to the human eye. Thankfully, however, it may be removed with non-invasive re-polishing.

Visit ARTINFO for more on the record-setting pink diamond and other notable auction news.