People love puppies. But all too often -- and in so many cruel ways -- these animals are betrayed by the very breeders who raise them. These breeding facilities are called puppy mills, where female breeding dogs are kept in close confinement and forced to bear litter after litter without any break for their bodies to recover. Once they can no longer produce puppies, these mothers are often killed. Adult breeding dogs and puppies are typically kept in cages with wire flooring that can injure their paws and legs.

Most pet store puppies come from puppy mills, though families who eventually buy these puppies in pet stores don't know their purchase feeds the profit-making machine that keeps puppy mills in business. 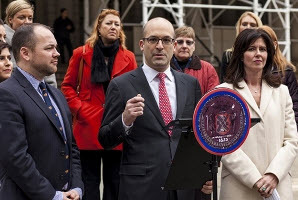 That's why we stood proudly with the New York City Council last week as they admirably addressed this issue head-on. By an overwhelming margin, the Council passed groundbreaking legislation -- Intro. 55-A, Intro. 136-A and Intro. 146-A -- that will put effective and enforceable pressure on commercial breeders to substantially improve the lives of thousands of dogs currently languishing in puppy mills in this country.

Spearheaded by Councilmembers Elizabeth Crowley and Corey Johnson, these measures will prohibit city pet shops from selling animals obtained from breeders who fail to meet even the most basic care standards prescribed by the federal Animal Welfare Act, as well as from animal brokers known for selling puppies to pet stores from disreputable, difficult-to-trace sources.

It will also require New York City pet shops to disclose information about the origins of the animals they sell, and require that dogs and cats sold at city pet shops are spayed/neutered, microchipped and dogs licensed prior to sale. These measures are critical to reducing pet homelessness, reuniting lost pets with owners and ensuring the safety of pets and the public.

Prior to this year, New York cities and communities did not have the authority to set their own standards, but in January, Governor Cuomo signed milestone legislation to allow local governments -- including New York City -- to regulate pet dealers for the first time in almost 15 years. Quickly acting on their new authority, the New York City Council created these humane measures.

While these laws won't keep all puppy mill puppies out of New York City pet stores, it's a critical step in the right direction. Taken together they will deeply impact the lives of dogs in puppy mills across the nation, and further New York City's reputation as a leader in animal welfare and safety.

These measures also send a clear message that I hope resonates outside of our city and state boundaries: A civilized society does not tolerate animal cruelty, whether it's fueled by greed, negligence or anything else.

Once that message travels far and wide, we may finally be able to elevate all our animal welfare policies and laws to match values that emphasize animal protection, not exploitation.