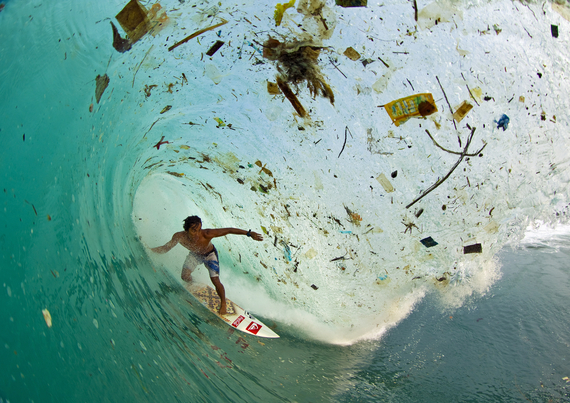 Every single time I go for a surf or a swim in the ocean in Southern California, I find plastic floating in the sea. I usually grab the plastic bag, wrapper or fragment and stuff it in my wetsuit or swim trunks to remove it from the water. My experience is indicative of the global plastic pollution epidemic. We are simply using too much wasteful plastic and a significant amount is getting into the ocean, where it is harming marine life.

Every year, an estimated 5-13 million tons of plastic enter our oceans. Here in the U.S., about 100 billion plastic bags are used annually. That's around 360 bags a year for each person in this country. Every day, more than 500 million plastic straws are discarded.

For every 167 disposable water bottles the average American uses, only 38 are recycled. Less than 5% of plastic bags are recycled. Recent studies predict that unless action is taken, by 2050, there will be more plastic by weight than fish in our oceans.

Plastic poses a major threat to our marine environment, ecosystems and marine life. It's now being found in seafood that can eventually land on our plates. A major problem with plastic is that it doesn't biodegrade. It photodegrades and breaks into smaller pieces, meaning that virtually every piece of plastic ever produced still exists today in some form. It's estimated that there are over 5.25 trillion particles of plastic spread throughout the oceans, resulting in a plastic smog.

Beach cleanup volunteers frequently cite plastic as one of the main forms of pollution picked up on beaches across coastlines. Unless removed, the plastic debris often ends up in the ocean. Cleaning beaches reduces ocean-bound plastic, raises awareness and provides important data about some of the most commonly littered items. However, beach cleanups alone will not solve the problem.

What can we do to turn the tide of plastic pollution? Over the last decade, many major cities like San Francisco, Los Angeles, Washington D.C., New York, San Diego and local communities across the country have implemented plastic bag bans or fees to help reduce our plastic footprint. Plastic bag bans are an effective way to decrease plastic bag use by addressing the problem where it starts, with the creation and consumption of plastic. As consumers, if we decline to use plastic bags and instead opt for reusable options, then decreased market demand can change the quantity of plastic generated and ultimately reduce a major source of pollution affecting our oceans and marine ecosystems.

Big plastic companies are aware of this and have poured millions of dollars into fighting against bag bans. For example, in California, while the first state-wide bag ban was signed into law by Governor Brown in 2014, the plastic industry is pushing hard to reverse this sensible law. It's now up to California citizens to vote 'Yes on Prop 67' to support the bag ban in November and reduce plastic pollution, clean up our oceans and beaches and protect marine wildlife.

Reducing our plastic footprint is not just for coastal communities. Since all of our waterways are connected, everyone has a stake in reducing the plastic smog that is choking our ocean. Here are three simple ways to reduce your footprint:

•Bring reusable bags and refuse plastic.
•Carry reusable water bottles. This not only benefits the environment, but also saves money.
•Skip the straw!

The good news is that we can change the current trajectory of marine plastic pollution by supporting sensible policies like Proposition 67 and simply choosing reusable items to reduce our plastic consumption. It's up to us to change the tide and make a positive difference in the health of our ocean, waves and beaches for future generations.

CEO of the Surfrider Foundation