In the Biblical Book of Exodus, the eighth plague that Yahweh inflicts on Egypt is one of locusts: "They covered the surface of the soil till the ground was black with them. They devoured all the greenstuff in the land and all the fruit of the trees that the hail had left. No green was left on any tree or plant in the fields throughout the land of Egypt" (10:15, Jerusalem translation). Swarms of these insects have recently appeared in Southern Russia, where they have already destroyed over a tenth of agricultural produce, and they may be far from done. Locusts are no respecters of national boundaries, so Ukraine, Poland, and many other countries could be next.

In a way that can seem disconcertingly "human," certain varieties of solitary grasshoppers, when subject to conditions of stress and overcrowding, change their character and swarm. They become larger, change color from green to brown, increase their rate of metabolism, breed earlier, and destroy all vegetation they encounter as they move in vast hoards about the countryside. This transformation is so abrupt and complete that, though their species is unchanged, they no longer seem to be the same sort of creature, and receive a new name - locusts. They were often spoken of with terror in the ancient world, because of the suddenness and unpredictability of their appearance, as well as their ability to destroy an entire orchard within minutes.

Nevertheless, locusts have long been themselves a source of nutriment, in fact in the Bible they are among the very few insects that are "clean" and, therefore, permitted as food. John the Baptist reportedly lived on honey and locusts in the wilderness. Confronted with locusts, people were forced to overcome any possible aversion to insects as food, since there would be very little or nothing else to eat after they had passed through a region.

Swarms of locusts have continued to appear from time to time throughout history. In Medieval portrayals of the Fall of Man, the creature tempting Eve with an apple was occasionally portrayed as a locust. In Medieval portrayals of the apocalypse, artists sometimes represented the minions of the Devil as locusts. Nevertheless, outbreaks of locusts very gradually became less destructive in the Old World. As the human population gradually increased and people became more urban, there was less vegetation to sustain swarms of locusts, so they would die out in an increasingly short period.

The New World, however, remained capable of supporting swarms of Biblical proportions throughout the nineteenth century. In the 1870s, after the Indians had been largely defeated, locusts were the main obstacle to Westward expansion in the United States. In many years, locusts destroyed over half of the country's agricultural produce west of the Mississippi River. The pioneers, who often compared themselves to the ancient Israelites, also dreaded the locusts as an expression of divine wrath. The Mormons, however, believed that they had been saved when God sent a flock of seagulls to devour the locusts, an event that they still celebrate today. In more recent times, one plague of locusts devastated Palestine in 1915, and one laid waste to the American Midwest in 1931, though outbreaks have been few, and relatively mild, since then.

The transformation of grasshoppers to locusts is eerily reminiscent of ways that human beings can at times change as population density increases. The grasshopper has long been celebrated as a sort of poet among insects, and his song announces that autumn has arrived. But swarms of locusts have, since ancient times, been compared to invading armies, and they evoke the violent conflicts that have accompanied modernization throughout Europe, America and the rest of the world. The reasons grasshoppers transform into locusts remain imperfectly understood, and there is a possibility that swarming might be, like other natural disasters, encouraged by climate change. 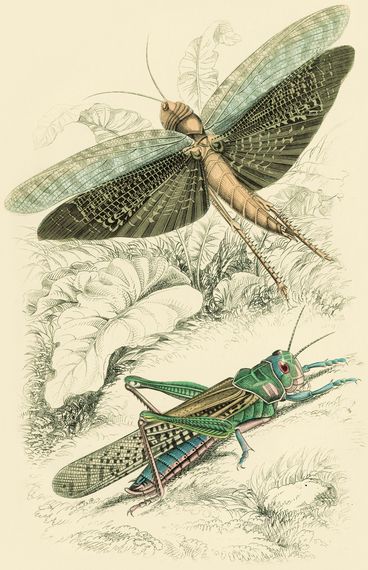 Grasshopper (below) and Locust 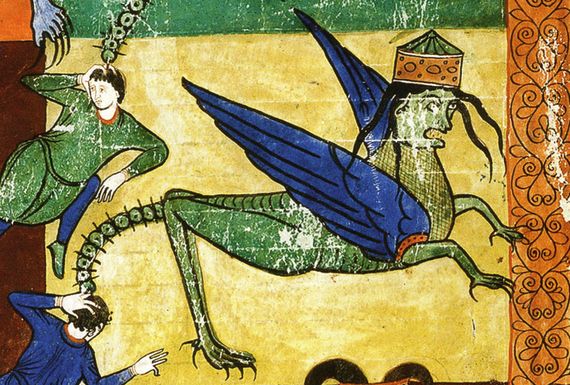 A Lost in the Devil's Army, from Commentary on the Apocalypse of Saint Sever, France, 1060-1070