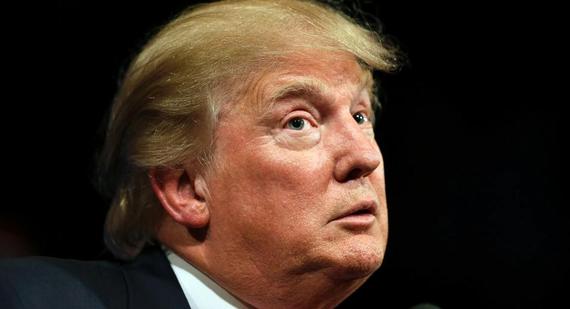 "What he did to me, he'll do to America!"
Photo courtesy of Associated Press

Marcus Aurelius said, "Accept the things to which fate binds you, and love the people with whom fate brings you together, but do so with all your heart." Of course, that was easy for Marcus to say -- he was a Roman emperor and a philosopher; not a bad fate to which to be resigned. Fate has been somewhat less kind to me. I have the thankless job of being Donald Trump's hair. By this time, you should be feeling better about your own life. By the way, I have to whisper because he's sleeping now and would throw a fit if he knew I was saying these things to you.

At the risk of stating the obvious, being The Donald's hair is not a job I ever applied for or desired. Had anyone asked me, I might have requested being Steve Jobs' mind, Kobe Bryant's body, or Oprah Winfrey's entertainment savvy. But, no. A cosmic roll of the dice resulted in my ending up on this man's head, in the now-familiar form at which you've no doubt gazed in stupefied wonder many times. As a result, I have taken and continue to take what I believe social scientists refer to as a butt-load of abuse. I'm not saying the abuse is undeserved considering the visual results of how The Donald treats me. I just want someone to feel my pain.

Can you feel my pain? The sad part is, they're correct. I mean, he's asking for it, isn't he? With my wavy slant that seems to defy gravity. I plunge, cover most of his forehead, and just before touching his brows, I ascend to the heavens. It's nauseating and this is my life.

And, come on, does he think he's fooling anyone? Is there a person on the planet who doesn't believe he's going to desperate, tasteless extents to camouflage the thinning? And my color; don't get me started. Too late. It's obviously no color that's ever been found in nature. To compare my color to burnt Cheetos or nicotine-stained teeth would be offensive to burnt Cheetos and nicotine-stained teeth. For the love of God, I was a natural, pleasant brown when I started!

But even more unbelievable than my physical appearance is the fact that Donald actually thinks it looks good. The man has, I assume, two functioning eyes and still he thinks this looks good. And wants to be the Leader of the Free World. If the man completely misjudges his own appearance, what in heaven's name will he do with situations of far greater import? Look at me! Hopefully not while you're eating. Kim Jung Un's hair is the laughingstock of the world and I swear he has better hair than Donald.

Which brings me to my main point: Help! As I have clearly established, I am being physically, emotionally and psychologically abused on a daily basis. Anything else would be preferable to this farcical follicle humiliation atop this man's head. I'd pick waterboarding in a second. Solitary confinement. A year of nothing but Celine Dion music. Please, friends! My vital force is on life support. Make him get a haircut for charity. Show him photos of how much better he could look. Shave me off him while he's sleeping. Find some way to separate me from this egomaniacal exemplar of bad taste and I'll be in your debt for life. Or else, mark my words, what he did to me, he'll do to America!

There just has to be more to my life than this. Unless I'm already in hell, which consists of my being reincarnated as one unpleasant person's body part after another. What's next, Hitler's moustache? Mel Gibson's brain? Charles Manson's arm? Oh, I think he's starting to wake up now. I better keep quiet. Hey, thanks for listening.

This has been Donald Trump's hair begging for your mercy.