The Stone Malone Gallery in Hollywood is running a timely art show before the California Primary on June 7th, featuring some of L.A.'s top street artists, including Shepard Fairey, Teachr, Free Humanity, Lydia Emily, The PSA Crew, and more. The art show, "Where Else But The Streets," runs through Saturday June 4th at Stone Malone Art Gallery on 7619 1/2 Melrose Ave.

When the show opened this weekend, sticker fans lined up for the gift bags of exclusive collectors sticker gift bags for the first fifteen in line. 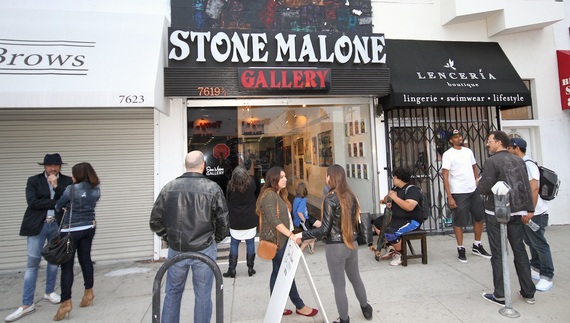 The art opening was also a book release party for the new photo book Where Else But The Streets: A Street Art Dossier, which features Shepard Fairey, Banksy, Mr. Brainwash, Teachr, Free Humanity, Lydia Emily, and other L.A. political street artists. 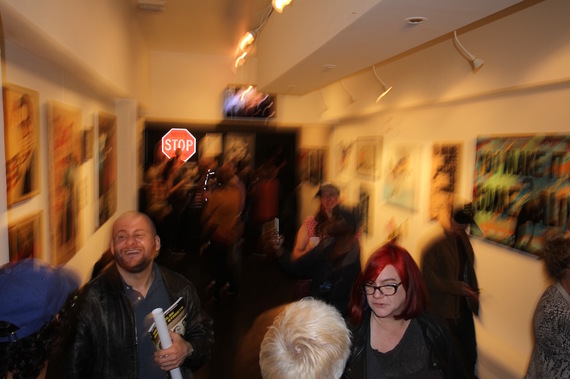 Shepard Fairey exhibited new works along the theme of campaign finance reform. This art show originated through the film PAY 2 PLAY: Democracy's High Stakes, about how outsiders are fighting to get money out of politics. Street art is used in the film as a metaphor for taking to the streets to use your voice. 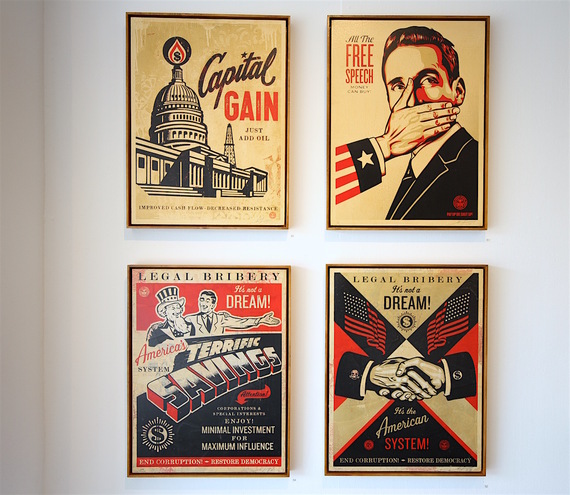 This piece by Free Humanity, "LandObama," cites Lando Calrissian's infamous realization over President Obama's visage. This was originally on the streets just before Bin Laden was killed, at a time when Obama's mojo was at an all-time low. This art appears in the film PAY 2 PLAY as well as the book Where Else But The Streets. 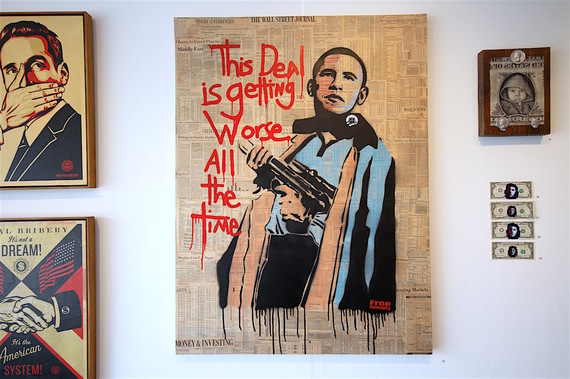 Even the right-wing street artist Sabo shares a distaste for Donald Trump. 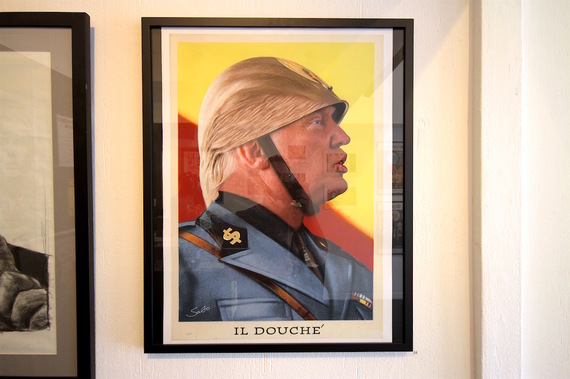 Teachr's art of his children sweeping up the pay-to-play system appears in the book. (Teachr has a solo show of his own this weekend Friday and Saturday at Fairfax High School on Melrose) 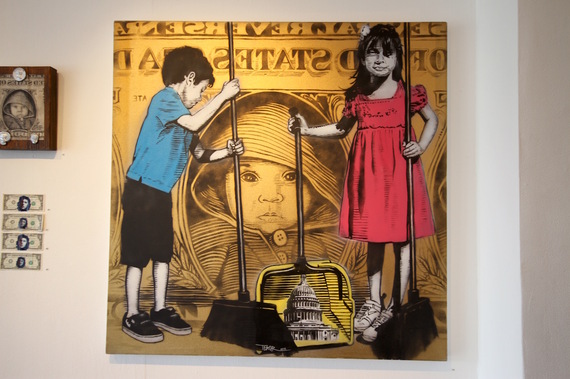 Self-effacing street artist Morley is known at the Stone Malone Gallery as a popular favorite. 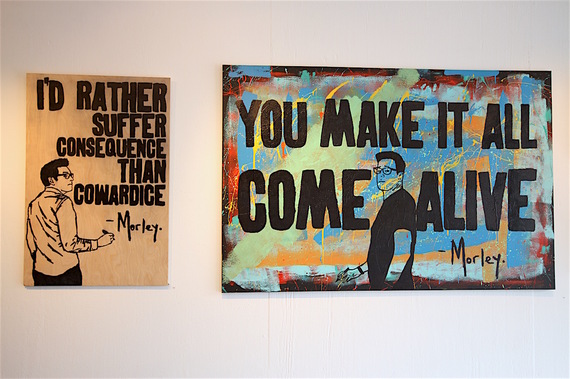 Activist Comics, a street series from The PSA Crew, were displayed on canvas for the first time. 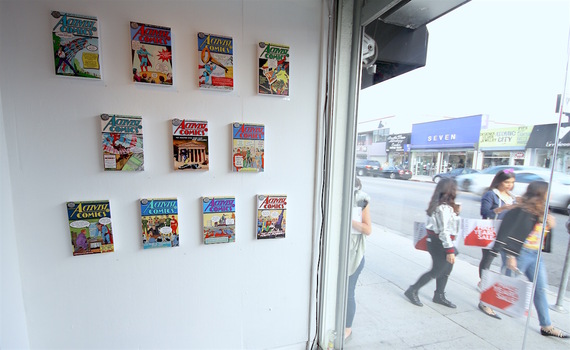 Archival prints of photos from the book are also on display. This picture of Alec Monopoly painting Jack Nicholson in lakers colors overlooks the Hollywood Walk of Fame. 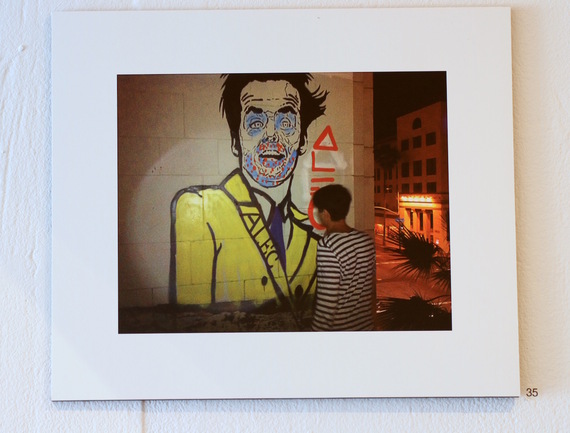 It was quite a happening turnout throughout the night, with music provided by Proper Propaganda of Radio Free Brooklyn. 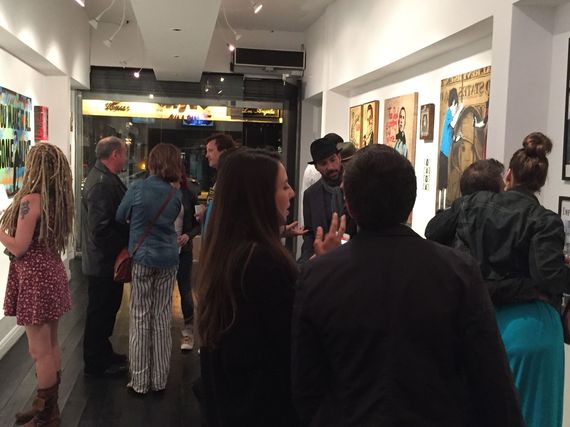 The Stamp Stampede was represented at the show, where partygoers could use their money as speech by stamping "NOT 2 B USED 4 BRIBING POLITICIANS" and spreading a message like street art does. 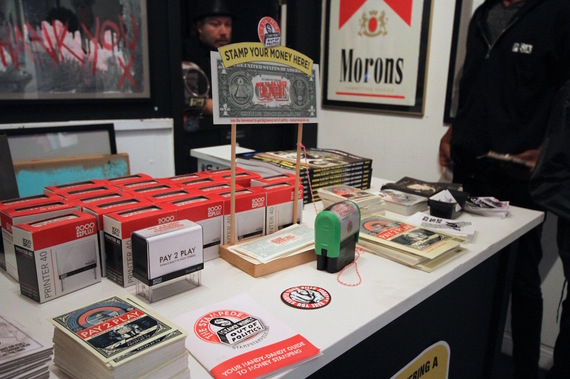 During daytime hours of the show, these high schoolers were overheard discussing what the Supreme Court artwork meant, with one fellow telling his friends who the Koch Brothers and Clarence Thomas are. 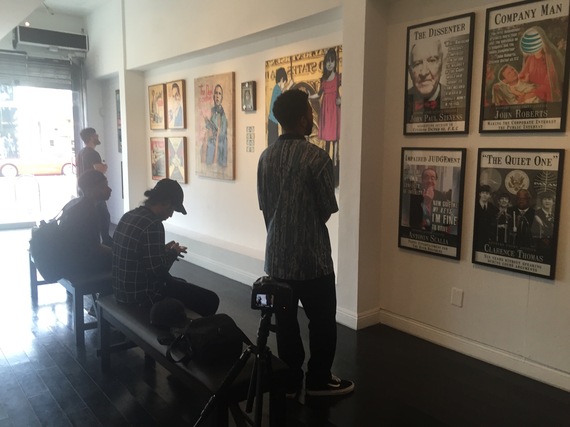 John Wellington Ennis's new book, Where Else But The Streets, was called "A fascinating study of art, politics, and dissent" by VICE's Jason Leopold. The book is now available through RothCo Press.