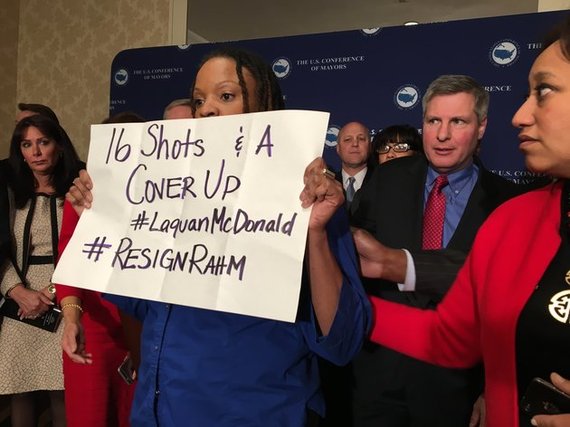 #BlackLivesMatter leaders are advocates. In light of the incessant number of shootings of black women, men, girls and boys, they are acting out. These activists are also acting up.

During a press gathering at the U.S. Conference of Mayors, #BlackLivesMatter organizers made their presence known. From shouting, "I need some water" to pressing their way in front of the podium, they demanded recognition and more so, justice for the slain. No mayor was going to ignore the crimes committed against its citizens of a certain color -- that day.

I am with you #BlackLivesMatter. The system, political pundits, "they" -- don't seem to respect us or our right to live, move and breathe. I know. George Zimmerman did not respect Trayvon Martin's right to walk down the street. Officer Brian Encinia did not respect Sandra Bland's right to smoke in her own car. Cleveland cops-to-the-rescue did not respect the right of an 11 year old to play and frolic. To exacerbate matters, taunters disrespect Tamir Rice's mother and make her the maternal culprit in the death of her own child. Sixteen shots showed little regard for Laquan McDonald. Rahm Emanuel continues to dismiss us all while lying about the wait-until-after-the-election cover up. It's so bad that neither a 56 year old woman opening the door at her Chicago home nor a 57 year old Indian man walking in his family's Madison, AL neighborhood -- count for much.

Your anger is warranted. The harvest for protesting is ripe, and the laborers are few. I hear you. When the systemic gatekeepers ignore us, they conscript us to run roughshod over them. I see -- they drew firstblood.

Yet, I am not so sure that disrupting rallies, yelling over speakers, storming a podium or interrupting news conferences is... well, respectful or even helpful. These methods indeed gain attention. They catch people off guard. They are brazen, bold and newsworthy. But what do such actions yield? Yes, we are reminded of the racial atrocities committed. Again we come face to face with impotent indictments and hollow convictions. Thank you for forcing us to never forget.

And now what? For what? To disturb our ambiguities is one thing. To disrupt order is quite another. It is resoundingly clear: This is not mama's civil rights movement.

No, I am not selling out, nor am I selling wolf tickets. I have taken my sons to rallies for Trayvon. Our mother and son participation at the National Black Scholars Gathering in Ferguson was more for his sake. My child needed to see firsthand the ground that soaked up Michael Brown's blood. He didn't know Laquan, but my 16 year old marched for the 16 shots that killed him. We talk day in and day out about the dangers of just being black not to mention the racist gasoline poured on being a black male.

Here is my dilemma. Some of the impertinent #BlackLivesMatter activity poses a womanist maternal conundrum for me. In a world where the same precocity in a white child is met with punishment of a black child, we must be mindful of what we model. Black children "rising up" or "speaking too loud" get sent to principal's office quick, fast, and in a hurry. White kids--they go to time-out or receive a second chance to explain whatever happened. Yes, I want my boys to stand up for themselves, but truth be told, they must proceed with caution. Very few of their teachers or administrators look like them or attempt to understand them. So, I hear the stentorian #BlackLivesMatter retort: "All the more reason for us to do what we do, the way we do it."

Nonetheless, I get dis-eased when I see #BlackLivesMatter leaders yelling, screaming, interrupting or engaging in a politics of disrespectability. Some law enforcement officers do not hesitate to kill our children. It doesn't begin there. School systems try to kill their spirits through excessive expulsions, punishment and lack of access to accelerated classes.

School is not an option, and yet, some of the teaching environments can be overtly oppressive. Consequently, our girls and boys need an education that exceeds these boundaries. Thus, they look to the liberating postures found in parents, religious leaders, and yes, community activists like #BlackLivesMatter. What kind of example are we setting for our children if we disrespect another's presence or speech? What do such actions truly embody? To what end do these means serve?

Most respected, fearless, courageous, audacious fighters of #BlackLivesMatter, I believe. Help my unbelief.