Call it Cavalia 2.0 if you wish. With 120 permanent employees, 65 horses (40 of which perform in most shows), 365 costumes, a 125-foot tall Big Top that seats more than 2,000 spectators, 200 moving lights, 19 projectors, a 17,500-square foot stage made from 10,000 tons of dirt, sand, and stone, and a man-made 40,000-gallon lake, Odysseo is a knockout production worth seeing as much for its horses, acrobats, aerialists, trick riders, and dancers as for its design, stagecraft, and use of current technology.

Unlike the Ringling Bros. and Barnum & Bailey Circus (which moves its two shows around the country each year in specialized 60-car trains), transporting Odysseo between cities requires 100 vehicles, eight shower stalls for the horses, and a 250-ton crane to lift the 70-ton technical grid into place. Over a year's time, Odysseo's horses will eat 18,000 bales of hay, 18.7 tons of grain, and 1,800 pounds of carrots.

Michele Hamel (who worked on designing the costumes for Odysseo with the late Georges Lévesque) explains that:

The gymnasts have several costume changes during the show: one is a free interpretation of African pants. Some of the trousers were inspired by Asian and Chinese tribes and, of course, we wanted colors. The costumes had to be very comfortable and not slippery because the gymnasts (who are originally from Guinea, Africa) do lots of very tricky moves. The durability of the fabrics (with regard to frequency of use and strength of movement) was a constant concern because the costumes will be on tour for a long time. The challenge in the conception of the costume for riders is to create something that will be original and lasting even when noble fabrics are used. We had to find a fabric that looked like silk, but was resistant to water, with nice colors and not too stiff. For this show we used stretch linen and faux fur. The first time we tried one of the costumes for the female riders in Nomads, the horse was scared by the fluffy sleeves of the corsage until he came near and smelled it and probably discovered it was not a living animal. 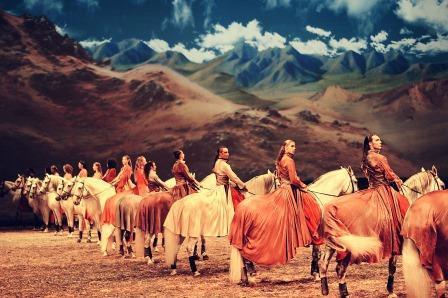 A scene from Odysseo (Photo by: Color-ish Company)

Whether one thinks of stage spectacles produced by Cirque du Soleil, some of the world's great opera companies, or scenic elements which have become trademarks of some Andrew Lloyd-Webber musicals (the giant truck tire in Cats, the falling chandelier in The Phantom of the Opera), the creative team for Odysseo came up with one sequence which I don't expect anyone to surpass in the near future. Toward the end of Act I, a fully-functioning carousel descends from the grid above the main stage. As some of the male acrobats perform on the carousel poles, it continues to slowly spin around, creating a breathtaking display of art, gymnastics, and showmanship. 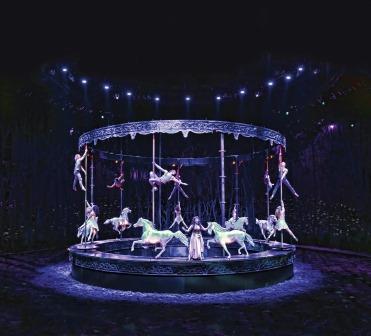 The carousel sequence from Odysseo (Photo by: Shelley Paulson)

Because digital scanning technology has come so far since the first production of Cavalia: A Magical Encounter Between Human and Horse in 2003, the visual design by GEODEZIK for Odysseo is nothing less than breathtaking. Whether one is watching the horses perform in a countryside where the mountains seem to dance from one side of the stage to another -- or seeing the giant head sculptures (moai) from Easter Island zoom up in size, as if to say "We're ready for our close-up, Mr. DeMille!" -- the visuals are remarkably rich. My favorite sequence takes place in the African desert and savanna, with flocks of birds flying out of the trees as the seasons slowly change from spring to summer and winter. 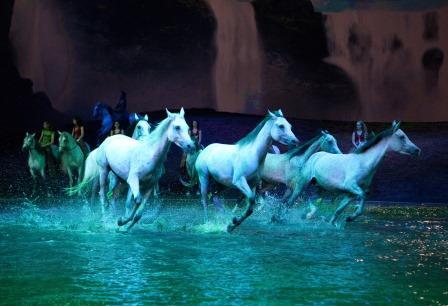 The real stars of Odysseo are, of course, the horses. In the first scene, I was dazzled by the beauty of a black and white American paint horse. One of my favorite moments in the show is a quiet segment at the top of Act II which begins with the horses lying down with their riders and trainers. One by one, the audience sees the horses rock from side to side on their backs until they gain enough momentum to get into a position from which they can stand up. 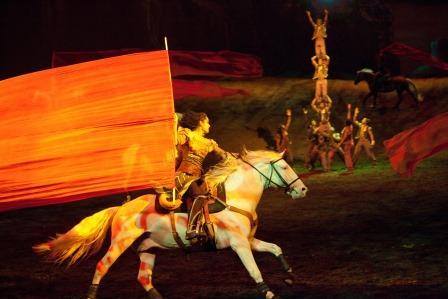 It would be folly to ignore the sheer athleticism of Odysseo. In addition to the riders and trainers, there are two sets of acrobats. The Africans do some jaw-dropping stunts and interact with the audience during a musical chant that asks for an end to war. The white acrobats draw gasps of astonishment with their displays of powerbocking on spring-loaded jumping stilts similar to the ones used in the following video.

What amazes me about Odysseo is how efficiently its creative team has managed to fill the vertical as well as horizontal space in front of the audience. From acrobats gallivanting across the stage on jumping stilts to muscular male gymnasts doing poetic pole dances, from nine male aerialists simultaneously performing on hoops above the stage to a cluster of angelic women being lifted on high, the spectacle is stunning.

Throw in a carousel that can be raised and lowered on cables and you've got yourself quite a show. As if all the talent on display were not enough, when it comes to eye candy there is a veritable banquet of beefcake with plenty of biceps, triceps, and abs to feed an audience's fantasies. Here's the trailer: