There is a massive (underground perhaps only to Schnabel-beholden, 20th c holdovers and latent Banksy tagalongs) artistic movement riding a veritable Gulf Stream of a current that is fast evolving past the eccentric, Outsider Art realm and straddling the cusp of the mainstream art world, commonly called Pop Surrealism.

Pop Surrealism is defined by realistic and hyper-realistic objects and imagery employed in fantastical ways and settings, often in 2-d with fine line- or brushwork rendered in vivid color or electrified monochromatic color schemes, in 3-d with the idiosyncratic combining of disparate objects, both found and crafted. In a nod to Pop Surrealism's animation and anime ancestry, eyes tend to dominate visages -- often oversized, limpid and life-like, frequently staring off into the distance and suggesting deep thought, nostalgia, sadness. "Low Brow" or "Big Eye Art" have long been used in reference to these works, pertaining to their regional origins and/or aesthetic impact.

Pop Surrealism is a hot and lively ticket in the galleries devoted to it, a network of e-linked, sleek spaces with its community of owners (often artists themselves) and clientele who inform and support each other via tech-reliant marketing and click-based purchasing, with the occasional spiffy opening thrown in for old times' sake. Pop Surrealism thrives and grows exponentially on the coasts and in euro-smart venues on all sides of all oceans; galleries with global mailing lists are everywhere, from Australia to Italy to savvy, unpretentious nooks all over the United States.

Starter artists, some great and some not, dabble, paint and post to social media their oeuvre with feverish determination, their works finding residence on walls of equally diverse and offbeat, novice collectors. A few artists command better to good prices and get them. A choice few lucky ones actually make their living off their work (so un-Vincent-like of them), selling their work before the proverbial paint has dried. I have witnessed one-man show sell-offs that rival big box store specials on Black Friday. The followers of these lucky few are religious in fervor and devotion, and though their disposable incomes are vast in range, they share in equal measure a kindred love and support of They Who Live, Breathe and Are this sublime schtuff, art of this century that is so not of the last, art that reaches back -- way back -- for iconographic rosters and inspiration but is so very now, so very challenging and in-your-face, art that is thrown up both in honor and protest of its predecessors (all those softly smudged, predictable landscapes and patricianized, boardroom-bound portraits) and doing a bang up job of it.

Pop Surrealism challenges the adult in us but beckons to the naughty child at the same time. Collecting this art is, in fact, a little like high-dollar trick or treating, a holiday and genre paid tribute 365 days a year by this group. Pop Surrealism utilizes fairy tale lore (age-old metaphors of good v evil, free will over destiny; not cute v ugly and nothing fixed via a chart-topping, 3-minute ditty with a killer hook) with the same reverence it invokes any god or saint or biblical legend. Though it might feature doll-like characters and furry little beasties, Pop Surrealism is anything but "cute" or a simplistic warm fuzzy -- quite the contrary: I believe the sweetest images serve as beacons to point out in full irony all the ugly and lost innocence out there. Pop Surrealism honors the Dark by seeing the Light in it. Best served in intricate frames that both embrace and mock their contents in wry visual dichotomy, Pop Surrealism is lush and comical, stark and poignant; Pop Surrealism is blood and fairy wings, dysfunction and redemption wrought by alchemists in leather Moto jackets.

One other happy manifestation of this art movement is that the creators themselves are prone to living, breathing and being their own best work. These gifted and bright individuals are not afraid to tap into the "Sturm und Drang" of own minds (or others'), this tapping into the creative self evidenced in the form of tattooed arms, legs and backs (a kindred art form to be sure), multi-hued hair and painted faces -- illustration of self. They sport daring garb: urban and Borg-like to feminine Goth to retro-street to profanity-laced quips printed loud n large on cotton T-shirts designed to shock n awe the random, PC-burdened passerby.

It further exists in their home environments, live-in studios loosely founded on the concept of hearth and home, digs in which random-seeming Stilleven fill cluttered desktops and endless shelving and fine, Outsider Art drips from every wall, where pressed tin ceilings form only a small part of the organically attained attic-chic theme and look down upon floors upon which techno beat dance steps have scuffed up what the Victorian armoires did not, where I suppose a coffeemaker or a mixing bowl might reside or even be utilized, but are not obliged. The food and drink of uninspired, bored and hungry earthlings is generally of secondary importance.

There are reigning Jasmine Becket Griffiths, Mark Rydens, Ray Caesars and the madly collected Simone Candinis and KuKulas; there are the immensely gifted and emerging Polina Goras, Aunia Kahns, Adam Oehlers, Ania Tomickas, Naoto Hattoris; there are the celeb-broaching David Stoupakis' and fledgling Eric Moffitts, nearly all of them with bustling online storefronts and clever domain addresses, many sporting cleverly crafted professional names and monikers. I wish I could write essays on them all, for these people are as fascinating as is their art. Pop Surrealism picture books abound, quaint at first glance but not intended for a child's non-filtering eyes. These images and their messages can lean extreme, but think about this: Via the Arts extreme emotion can be expressed, at times resulting in moments of genius. This outlet, I believe, is a key to society's ability to move beyond the violence that surrounds us today (In Support of Art as Non-Violent Means of Expression). Sure, buy and peruse the books, but in keeping with the online dominance of this genre in which portfolios, bios, shows and sales -- even live auctions -- are posted, listed and closed, I urge you to surf the web, scroll and click and relish what you find there.

One artist I wish to pay homage to I have just described in detail, all but for the specific color of her hair, cotton candy[land] pink, and the aura of twenty-going-on-two hundred years old/young she embodies in the genuineness of her talent, her conviction and her desire to produce so long as the Muses and her docs allow. Her joints are not hinged so great; it hurts, she says, when the weather changes. The Fates do have this horrible way with tricks: they play their nastiest ones on the choicest and least deserving of Humans.

And the reason I know I need to pay this homage, post this piece, get word out? It's because, more than anything else, I don't want to. I want to keep knowledge of artist Mab Graves a bit off sides and out of the spotlight, for I know that when she gets the recognition -- and can command the commensurate prices -- she deserves, I as pithy, casual collector and fan won't have a chance. I have so far a small handful of her pieces, works for which I already had to scramble, pieces that are to board or canvas what the finest cameo carvings have ever been to any shell, gems created with single hair brushes, pins, toothpicks and a set of eyes that no doubt focus on ignoring the strain. 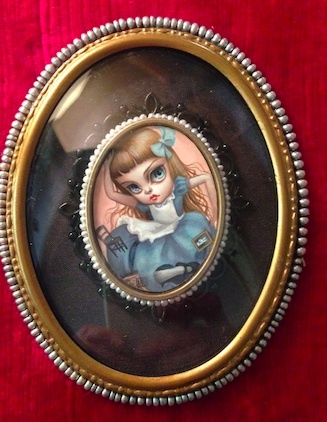 Mab calls herself a miniaturist, but her works are anything but small. The quality of her work lends grandeur to her larger pieces. Her miniatures are lit from within. She possesses the casual friendliness of our Midwest kindred and I believe her personal radar is on track -- she recognizes the sincerity of appreciation in her devotees and is not freaked out by it or standoffish. We converse like friends, even though we have met only a couple of times and I would imagine our paths will cross again but only sporadically, for she does happen to live in the same city as I but is on a major trajectory all her own. Such is life when one has family, home, love and health to pursue alongside an obsessive need to do, make and be Art.

So much to do, so little time, especially when time plays uncanny tricks and flies once any project has commenced. Being an illustrator, a writer and a lyricist, I get that and appreciate Mab's drive all the more for it. I have stayed up all night writing or recording and loved every minute of sleep I didn't get. Sleep deprivation is indeed worn a bit like a badge; it's a rite of passage in the creative world. But I do want to buy more of her stuff. So forget I ever posted this homage to one whose work I believe needs to be in art museums. The astute curator will nab a Mab sooner than later. I hope they do it generously and from her own two hard-working hands. 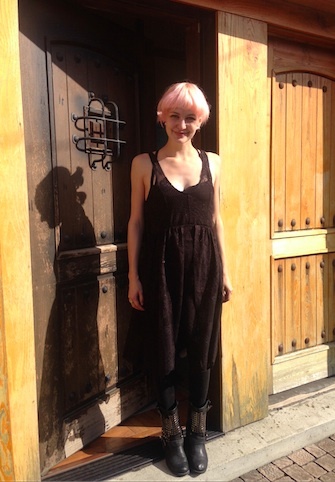