Photo: Children create patterns and tessellations with brightly colored magnetic shapes in the Miles of Tiles exhibit, featured at the 2014 Math Fair.

We tend to think of math as a series of numbers and symbols on paper, often preceding a list of multiple-choice answers intentionally presented to confound you. But what if we could change the perception of math from being an enigma to being a part of our everyday lives?
Math is everywhere around us, and it's beautiful.

Math imparts the perfect proportion of sweet to salty in your favorite foods and drives the unforgettable melody of the summer's most hummable tune. Math also defines the processes that convert the sun's rays into clean energy and drives the research behind new generations of life-saving medications. Math skills have become so fundamental to our 21st-century economy that the Department of Commerce expects jobs in science, technology and engineering and math (STEM) fields to grow by 17 percent between 2008 and 2018, compared to 9.8 percent for non-STEM occupations.

What's more, STEM skills are in demand in other fields. So much so that a significant proportion of graduates with STEM degrees go into careers in non-STEM fields. Even better, regardless of what field they go into, STEM degree holders earn more money, according to the department's report.

So what does it mean to have STEM skills? All STEM-related fields, whether for study or careers, require fluency in math, in addition to problem-solving and critical thinking skills. Math during the school years, it seems, is the most profound stumbling block to success. Nearly three-quarters of U.S. 12th graders are not proficient in math, according to the National Assessment of Educational Progress.

This stark reality doesn't just keep students from the most lucrative careers. ChildTrends reports that lacking basic math skills can make daily tasks a struggle for young people, from tabulating a grocery bill to applying for jobs.

The message is clear: we need all students to succeed in math. But to fully grasp math - to learn to love it, even - math must be understood as more than numbers and symbols on paper. It needs to be engaging, engrossing and enriching for kids. Unfortunately, as a society, we have not done a great job with that. And if we're going to create a new generation of STEM-thinkers and problems solvers to solve the world's most challenging problems, we're going to have to change the way we view math.

One way is by making math hands-on, interactive and, yes, even fun.

Children learn by playing, so we need to let them play with mathematical concepts. It's not as hard as it sounds.

Nonprofit companies -- like the MIND Research Institute, where I work -- are committed to changing how students learn math in the classroom. But we can't completely change children's relationship with math education by focusing solely on their time at school. Parents and communities need to be involved in the shift. That's the goal of the one-day Math Fair: At the Square Root of Fun on August 2: to showcase the beauty of math in the world around us and allow children of all ages to get their hands on math in a completely fun and utterly engaging ways. 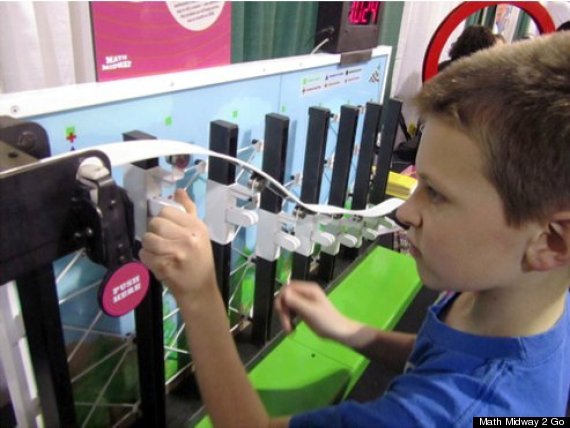 Image: Budding mathematicians can design their own roller coaster and measure the speed generated by different slopes in the Roller Graphicoaster exhibit.

From a math-themed laser game and gyroscope to theatrical performances and sing-alongs, the fair brings math to life in countless and unexpected ways for children of all ages. For the preschool set, marble runs explore physics, floor puzzles encourage spatial thinking, and a one-of-a-kind bounce house illustrates the geometric shapes produced by planes intersecting a cone. For older children, an Imagination Playground encourages them to design and build their own structure while a one-of-a-kind train ride carries visitors on a journey through four dimensions. I like to think that we are creating a pop-up math museum for a day.

Putting on a math fair for at least 2,000 guests that brings math to life is no small effort. But I'm witnessing an impressive groundswell of support bubbling up to bolster the fair's goals. Major corporations such as Microsemi are lending their support to encourage the next generation to embrace math. Of course, they know first-hand how important these skills are for their workforce today and in the future. A small army of volunteers, 200 strong, are already at work to make the day a success.

With a lot of inspiration and a little luck, this math fair will make a meaningful impact on some children's view of math - not as part of a standardized test, but as something that makes a difference in our world and in their lives.

For more information about the math fair and MIND Research, please visit: http://www.mindresearch.net/mathfair/