The Peloponnese, like much of Greece, is recession country.

Strings of shuttered storefronts line the highway. Some still carry For Rent signs in the front window. Most are completely empty, doors unlocked. Scores of other buildings have been abandoned mid-construction--windowless, graffiti-ed, rebar poking through unfinished cement columns. 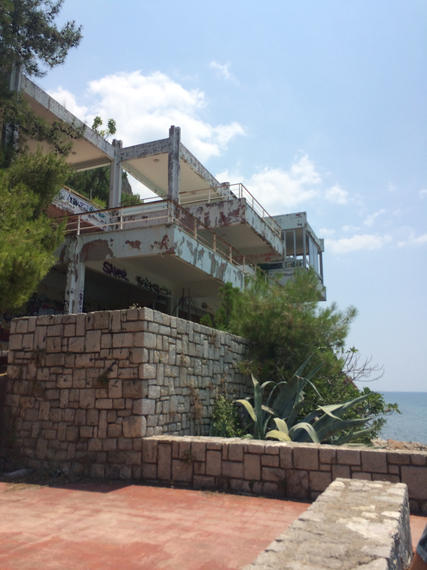 Recessions make ghosts--ghosts of industry past, ghosts of supermarkets past, ghosts of tenants and their dream condos past. And Greece, in the midst of an economic crisis worse than the Great Depression, is full of them.

Outside the ancient city of Olympia, trash continues to pile high. Plastic garbage bags and other waste stretch down the road and form small mountains on street corners. The local government has been unable to negotiate a new contract on a local landfill, so trash remains roadside. It rots in the summer heat, and the stench carries through town.

Budgets for municipal services like trash collection have been slashed since the onset of the crisis. The Greek state, like its people, is broke. And the austerity regime imposed by Greece's creditors--heavily restricting the expenditure of the state--has meant that local governments have received little money to keep their cities running.

If the recession created ghosts, austerity has ensured that they continue to haunt the Greeks. Between 2009 and 2011, for example, Greece was forced to cut its public hospital budget by a quarter, its drug treatment programs by a third, and its pharmaceutical spending by a half. Since then, Greece has seen a spike in HIV infection, suicides, and infant mortality.

Pensions--already cut in half, with this week's fresh austerity measures aiming to cut more--can no longer support Greek workers. In Athens, taxi drivers relay stories of returning from years of retirement. Their children, university graduates, have just moved back into the house, unemployed. And the pension cannot handle the strain.

Yet it is the youth that the crisis has hit hardest.

Around the country, schools are crumbling. Austerity measures have brought universities to the "point of collapse." Thousands of teachers laid off, thousands of programs canceled. Meanwhile, public high schools struggle to retain their teachers, let alone offer basic school supplies. As of 2012, more than 2,000 Greek schools had closed their doors due to austerity measures.

In Nafplio--a seaside tourist destination two hours outside of Athens--a high school senior tells me that her public school is simply overburdened. Despite the fact that they have the same students each year, teachers do not know the students' names. She shows me videos of her classes--the students laughing, throwing things across the room, as the teacher talks to no one. The only hope for a university education, she tells me, is to pay for private lessons outside of the public system.

For the university graduates, however, the situation is even more severe. Youth unemployment in Greece has soared to 60 percent. And this statistic is compounded by two ugly trends. First, Greek unemployment is increasingly long-term--meaning that, for those without a job, there is little hope of finding one. Second, for those with a job, employment is increasingly precarious--over 70 percent of Greek part-time workers in 2014 wanted to work more hours but could not, the highest rate in Europe.

At a bar in Psyri, a central neighborhood of Athens, a group of young professionals swaps tales of underemployment. Most companies, they claim, simply do not have enough clients. The day is spent drinking coffee, debating and bemoaning the ongoing political drama that has seen little support and a great deal of finger-pointing at the Greeks for their 'irresponsible' debt.

They tell me that the July 5 referendum--a powerful symbol of Greek defiance to the austerity regime--never really mattered. That even debt relief will not solve their generation's problems. For 60 percent of the Greek youth--jobless, without prospects--the road to economic recovery appears impossibly long. The prognosis is grim, and they are running out of Euros.

Over in Brussels, though, prime ministers and their finance henchmen have made decisions with little attention to these lived realities.

In the first phase of the negotiations this summer, we heard only the numbers. Finance ministers crunched away to see how to make a repayment plan work. Austerity was pitched by the troika as a simple matter of economics--balancing the books, trimming away at the debt.

Then came the referendum. Here, Syriza and the Greek people sought to shift the conversation toward their needs, their lived reality. The overwhelming OXI ("no") vote sought to push Europe to recognize austerity as more than book balancing act.

Yet in the second, post-referendum phase of the negotiations, austerity merely become a political question. Angela Merkel talked about how the lack of "trust" with Prime Minister Alexis Tsipras would hurt the Greek people. Or worse: the Greek question became one of Merkel's local political image. Will she offer an olive branch and defy the German public? Or will she punish the Greeks as 'Iron Chancellor'?

Of course, missing from these negotiations--and missing from the bailout deal that is moving forward in Greece today--is the human question of austerity. It was never the jobs, or the hospitals, or the schools. It was the numbers, or the handshakes, or the very principle of paying what one owes. The stories of the Greeks suffering under the iron fist of austerity were not welcome at the negotiating table.

Indeed, the cries of OXI will not be heard in Brussels, let alone Berlin. Mass movements will be punished. The outcome is predetermined--the only choice for countries like Greece is when to acquiesce.

It seems that austerity is returning to Greece, stronger than ever. The new package is, according to the Financial Times, "the most intrusive economic supervision programme ever mounted in the EU." The banks may be solvent--their bankers aglow--but the Greek people will continue to suffer. If Tsirpras looked like a "beaten dog" after the summit, it was his country that took the beating.