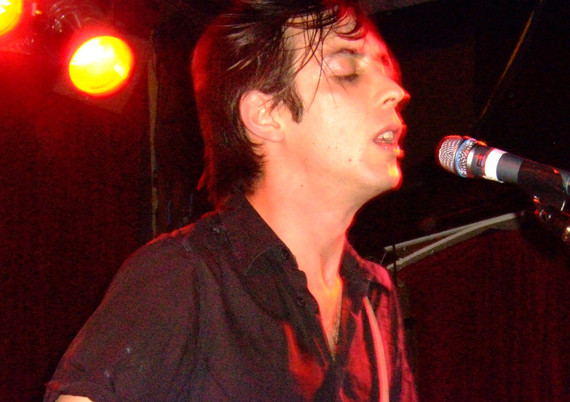 Two-thirds of the way through Wolf Parade's set at Terminal Five on Tuesday, guitarist Dan Boeckner made a confession. "It's still really intimidating to play in New York City," he said. "Thank you guys for being so nice to us."

That's not exactly the kind of humility you'd expect from a band on a big label, touring off its third album and playing a show in one of the Big Apple's most sought after venues. But however nervous Boeckner and his bandmates may have been before they took the stage, they didn't show it.

Instead, Wolf Parade pounced, opening with "Soldier's Grin," opting for an audience pleaser right out of the gate.

Boeckner's co-frontman, Spencer Krug spent most of the show hunched over his keyboard as he swayed back and forth, letting his curly locks brush against the top of his instrument.

Wolf Parade, unlike some stoic indie outfits, was determined not to let inertia take hold. Rather, Boeckner and Krug lead the charge, maintaining a perpetual motion that rubbed off on the crowd. Too often, audiences at rock shows are content to stand, straight legged and stone-faced as though they would rather be anywhere else than the concert they paid $47.50 to attend. But an audience's tepid demeanor has a great deal to do with how the band they're watching behaves. Wolf Parade performed with electricity and exuberance and the crowd reciprocated the energy.

Fans jumped along to songs like "California Dreamer" and "I'll Believe In Anything" and even engaged in some mild shoving. I can't remember the last time I was gently pushed at a rock show.

While the band delivered many of the fan favorites from Wolf Parade's two albums past, 2005's Apologies To The Queen Mary and 2008's At Mount Zoomer, much of the set consisted of tracks from their recently released, Expo 86. Songs like "Pobody's Nerfect" and "Ghost Pressure," received polite, though not especially enthusiastic applause. It appeared Expo (released in late June) hadn't made its way into the MP3 libraries of many concertgoers.

But the crowd's enthusiasm fed upon the variety provided by the constantly switching lead vocals of Boeckner and Krug. The keyboard-centric Krug offerings are usually more frantic and impassioned. Krug's voice is also higher and more volatile. Boeckner is less overtly emotional in his approach. His work smolders with a hearthy warmth that uses fuzzy guitar for kindling. His voice is subtly boisterous, but rarely on edge.

The two singer-songwriters have side projects to keep them busy when Wolf Parade's schedule lightens. With his wife, Alexei Perry, Boeckner fronts Handsome Furs, while Krug leads Sunset Rubdown.

But the two are at their best when feeding off the chemistry they've forged over seven years of performing together. The two are on the same page sonically and when it comes to onstage patter. Boeckner's confessed nervousness came after Krug professed his band's fondness for New York.

Set list:
1. Soldier's Grin
2. What Did My Lover Say? (It Always Had to Go This Way)
3. Palm Road
4. Dear Sons And Daughters Of Hungry Ghosts
5. Ghost Pressure
6. In the Direction of the Moon
7. Fine Young Cannibals
8. Cave-o-Sapien
9. This Heart's On Fire
10. I'll Believe In Anything
11. Little Golden Age
12. California Dreamer
13. Pobody's Nerfect
14. Cloud Shadow On The Mountain
15. Shine A Light
16. Kissing The Beehive

Wolf Parade, "Shine a Light" by HuffingtonPost
Download
Calling all HuffPost superfans!
Sign up for membership to become a founding member and help shape HuffPost's next chapter
Join HuffPost