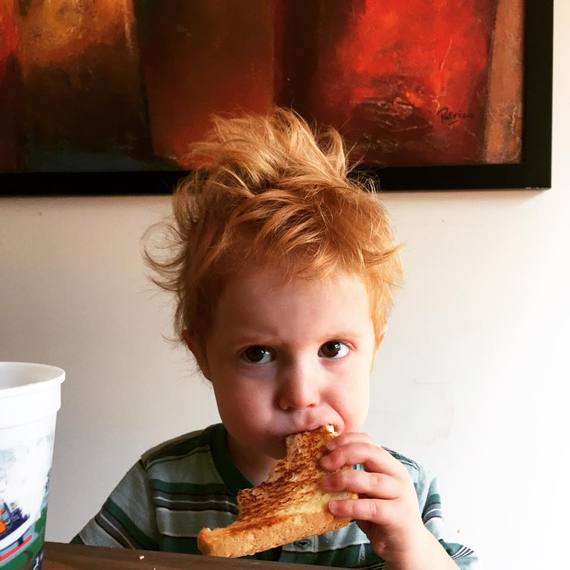 First, Lord: Bend the brims of his ball caps and remove the stickers. Or, please, at least allow that silly trend to have passed by the time he can afford his own hats.

Let him sleep under a blanket of comic books with the light on, because he fell asleep reading. Drop the right books in his lap at the library, and make the librarian nice enough to let him lie down on the floor to read them. Dear Lord, let libraries still exist!

Protect him from the stupidity of childhood. Hide from his knowledge such games as "Shoot the arrow straight up in the air and run around while trying not to die" and "Let's see who can get the biggest icicle off the roof with our hands" and "I bet if we duct tape these fireworks together it will make them much cooler and louder."

Whisper in his head that he's not nearly as fat or skinny or ugly as he thinks he is. Nobody talks to boys about these things, and they worry about them as much as girls do. Maybe just light up a bush near him and tell him he's a good-looking dude. That would be helpful, and will also probably scare the hell out of him. It's a good idea to keep him on his toes.

And lead him not into believing the bullsh*t his teenage friends tell him about their "experiences" with women. They are lying and are worthy of smite. Granted, I don't know what smiting is. Is it like a God-smack on the wrist? If so, smite them. If not, maybe just give them diarrhea for a week or two.

Protect him from the hard drugs and help him to realize that soft ones may not destroy his brain, but will steal his time. Show him that time is precious, and that video games are a perfectly good use of precious time as long as they are good video games. Also, while I have you here, please tell EA to start making good video games again.

Let him be good enough at sports to be picked third or fourth, but not good enough to want to play on expensive club teams or have unrealistic dreams of being a professional athlete. We don't have the money for that; the Kinnears are JV athletes in their prime.

And if he must have heartbreak, please let him have good friends to comfort him, hug him, and eventually tell him that he needs to take a shower and shut up about "so and so" because he is getting annoying, and people are starting to talk about the smell.

O Lord, give my boy a college scholarship so that I may take the $4,500 I've saved, that won't even come close to paying for college anyway, and spend it on something nice for me -- like a new refrigerator. Sigh... please let me think of something better to spend $4,500 on than a refrigerator.

And Lord, make my right arm strong so that no matter how old, weak, and senile I get, my boy will never beat me in an arm-wrestling match. Let my unending arm strength confound him from childhood to adulthood, so that when I leave this mortal coil, my tombstone will read:

And lastly, Lord, in his darkest, most lonely moments, when no one is around and his thoughts feel more like walls closing in than the sky opening up, allow me to appear via cloud, a la Mufasa in The Lion King, and tell him that I love him... and to take a shower. People are starting to talk.

An earlier version of this piece appeared on John Kinnear's personal blog, Ask Your Dad. You can also find him trying to be funny on Facebook.