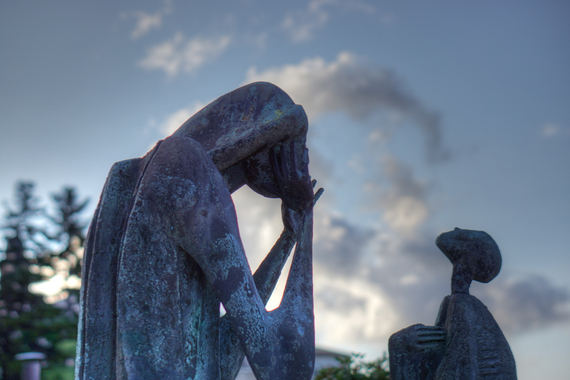 Sam: It's like in the great stories, Mr. Frodo, the ones that really mattered. Full of darkness and danger they were, and sometimes you didn't want to know the end because how could the end be happy? How could the world go back to the way it was when so much bad had happened? But in the end it's only a passing thing, this shadow; even darkness must pass. A new day will come, and when the sun shines, it'll shine out the clearer. Those were the stories that stayed with you, that meant something even if you were too small to understand why. But I think, Mr. Frodo, I do understand, I know now folk in those stories had lots of chances of turning back, only they didn't. They kept going because they were holding on to something.

Frodo: What are we holding on to, Sam?

Sam: That there's some good in this world, Mr. Frodo, and it's worth fighting for.

A conversation between Sam and Frodo in J.R.R. Tolkein's The Two Towers

This coming Tuesday, November 8, 2016, we will hold an election that has revealed a deep polarity. For some it is a choice between good and evil, for others a choice between the lesser of two evils. The future feels perilous, and the outcome of the election is not known. Like Frodo, many are simply weary and at the edge of feeling defeated. Like poor Gollum, who witnessed the conversation between Sam and Frodo with sad confusion, many are torn by the good they once felt inside but are now doubting its existence. And like Sam, others wonder why we would be willing to turn back to the way it was when so much bad happened.

I think the filmmaker Michael Moore had it right when he described Donald Trump as a human Molotov cocktail. Can we separate the person of Trump, who is an opportunist, egomaniac, narcissist, con artist, demagogue, sociopath, and psychopath, from the Trump phenomenon, which is some form of general rejection of the status quo? The metaphor of a human Molotov cocktail covers a lot of territory, but ultimately it is about something feeling deeply amiss at the collective level.

A few weeks ago in Santa Clara, California, I had the opportunity to listen to Dr. Larry Brilliant, an epidemiologist who is board-certified in preventive medicine and public health. In the mid-1970s, he was part of a World Health Organization (WHO) team that successfully eradicated smallpox. Yes, smallpox, a disease that killed half a billion people in the preceding century. His story, like so many, started with the obstacles he faced--a parent's death, depression, aimlessness. He felt something deeply amiss but had no language or mentors to support him. He recalled how in 1962, the period of his depression, "the world teetered on the brink of nuclear madness, federal troops were on patrol after the first black student was admitted to Ole Miss, and Bob Dylan was singin' "A Hard Rain's a-Gonna Fall."

Brilliant spoke about the upcoming election. He had just listened to the third presidential debate on the way down to our group's meeting. For someone whose life work has been about nonattachment, he was failing miserably. "I am attached," he said, with some nodding and chuckles from the audience. And then he said that what he hoped for was the possibility that we had reached a nadir, a low point in our national discourse, from which we could rise.

Our host prompted him to recall a chance meeting he had had with Dr. Martin Luther King. I say "chance" because King was not yet widely known, and King's speaking engagement was hindered by a fierce rain that kept most of his potential audience indoors. But not Brilliant. He showed up and for his effort was ushered by King into the front seats of the auditorium, a space that felt more intimate. And what he remembered was not simply the now famous line about the arc of the moral universe being long but bending toward justice, but rather King's imploring the audience to understand that this would not happen by itself.

Precisely 51 years later, Brilliant recalled this lesson in a commencement address to the Harvard School of Public Health.

Reflecting on his words at the commencement address, he told us that it might have been more in the cadence of rock 'n' roll than theology, but I think it was in the same cadence as Sam talking to Frodo. It is the mythic cadence of all great stories, rising above despair, facing obstacles with personal agency and not turning back.

Whatever the outcome this Tuesday--and I am attached--let us not turn back. Let us join together with ever-greater intensity to hold out for a world that still has good in it. It will not happen by itself.

For more information on the author, go to www.alanbriskin.com