In only 200 years or so, we will have burned all fossil fuel on the planet, if carbon emissions keep rising like last year. Over time all ice on Earth will melt and cities like New York will be commited to the sea. Humankind has found other energy sources already, but coal, oil and gas are a gift to those who own them and as long as they can be sold for more than it costs to get them out the ground there is no economic brake for carbon emissions. We need to solve this problem. And for this, we might want to link the climate risk with its cause to incentivize company strategies that have a chance to survive.

Long before it was born, humanity got this incredibly valuable present: fossil fuels. Oil, coal and gas are captured sunlight once collected by tiny algae and huge forests. Over time this fossilized solar energy sunk into Earth's depth. Not everyone got the same piece of the cake; some regions got more, some less. It took us a while to discover how to use this wealth, but its energy density was unprecedented, so much greater than that of wood. So it fueled our industrial evolution - it was a present that meant prosperity as well as cultural development.

Yet in the meantime it has turned out to cause climate change and we are forced to think how to use solar power directly, without the carbon-detour. If emissions continue to rise linearly by 0.25 billion metric tons of carbon every year, we will have burned everything we found by the end of the next century. That sounds far away, but it is also an incredible amount of carbon. Once turned into CO2 and blown into the sky, a large part of it stays there for hundreds of years and even millennia. Already now, it causes changes of the Earth system that will last for thousands of years.

Burn it all - melt it all

Last week we showed in a study in Science Advances that if we do that, burn all the fossil fuels, we melt all the ice of Antarctica. Since Antarctica is the coldest continent on Earth this means we would turn all the ice on the planet into liquid water and hence raise sea level worldwide higher than ever before in the history of humanity - let alone human civilization. That would reshape our coastlines and thereby change the face of our planet (see National Geographic maps for ice-free world). Cities like New York, London, Hong Kong, Shanghai, Tokyo, Calcutta, Hamburg, Jakarta, Cairo would be committed to the sea.

Eliminating all ice on Antarctica would take thousands of years. That is even further away than the 200 years we need to burn all fossil fuels. And, understandably, possible changes in the far future are perceived as something we can ignore for now. But that is not true. As mind-blowing as it is: What we do now, within just a few decades, triggers changes that will be felt for thousands of years to come. We are setting the Earth system in motion and, on the way, destroy important parts of our cultural heritage.

But not just that. Even though melting all ice on Earth will take long, the sea-level rise will be quick enough to pose a real challenge for us to adapt to: Already in the first few centuries of the great melting, sea levels will rise up to two feet every ten years (see graph). This is a lot. New York City is currently preparing for a sea-level rise of about four feet for the end of the century. More than two inches every year is faster than most administrative processes can handle.

All this only happens if we do not stop emitting carbon. We carried out comprehensive computer simulations for this hypothetical scenario - gedankenexperiments, if you like. Now people might say: who knows what's in a thousand years? The answer is: physics does. While it's hard to predict the speed of near-term melting, because the climate system is complex, long-term projections are easier. If you put an ice-cube into your living room, in most families guesses on the rate with which the ice cube disappears will diverge. But none of us has a doubt that it will disappear. The reason is that we know the melting temperature of ice - and it is lower than what we normally like to endure in our living room. 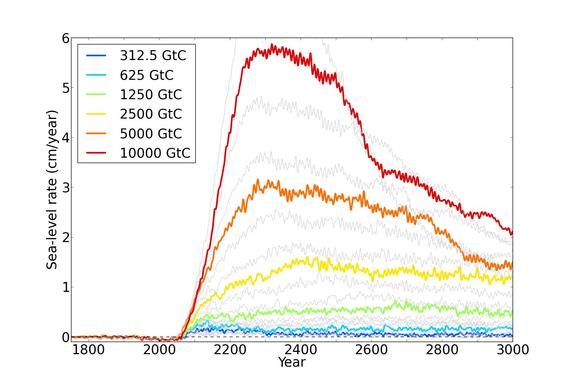 Graph: Rate of sea-level rise for different cumulative emissions. The available fossil fuel carbon is estimated to be around 10000 billion metric tons of carbon (10000 GtC) as depicted by the red line (Winkelmann et al., 2015).

A diamond that needs to stay coal

Sea-level rise is just one example of why we might not want to warm our planet by 20°F or more. If we want to avoid that we have to keep coal in the ground. That is a well-known fact. So fossil fuels are a present to those who own it, yet one that we cannot unwrap, if we do not want to change our entire planet.

Now here is a problem: Even if renewables can provide all the energy humanity needs, fossil fuels would still be worth something as long as you can sell them for more than you need to get them out of the ground and around the world to its consumers. What is needed is an economic mechanism to keep it in the ground. The simplest way is to put a price on carbon emissions.

Europe uses an emissions trading scheme to do exactly that. Emission rights are given to the emitting industries and they can trade them among each other. The total amount of certificates is, in principle, following the emission reduction path that is politically set. The carbon price is then determined by the demand - similar to the trading on a stock market.

So much for the trading. But if a company gives out stocks, it receives investment money in return. How does this work for the emission certificates? When the trading scheme was introduced in Europe all emission rights were given out for free and companies were able to profit by selling emission certificates they did not need. Later, part of the emission rights were auctioned which brought some money into public budgets, but the initial price of the certificates was and is not linked to the actual damage the emissions cause. It is an undetermined variable in the equation.

An alternative could be to couple this initial price of carbon to climate damages. This should not be confused with a "cost-benefit analysis" because a lot of climate impacts cannot be monetarized. There is no price tag one can put on a refugee that is fleeing a monsoon flooding or even "just" on a polar bear that is drowning. A lot of climate impacts cannot be monetarized in an ethical way. Thus the total amount of emission should continue to be determined by political will.

But just because there are not only monetary reasons to reduce carbon emissions does not mean we have to ignore the monetary ones that exist. It makes a lot of sense that the price of carbon should also reflect the price society pays to repair at least some of the damages caused by climate change. One way could be via the initial price of emission certificates. This way the risk of an increase in climate damages including those that are difficult to predict, like extreme weather events, would be transferred to the emitting industries.

The damages are likely to increase over time which creates an additional incentive to find future strategies of carbon reduction. Such a scheme would change the price of carbon but it would not replace a carbon trading scheme. It would complement the trading to incorporate the risk of future climate change and the societal need for adaptation into the price of carbon. Including future risks into your company's strategy is a very common challenge. At the moment the carbon risk for companies lies within the uncertainty of future European policies - not within the uncertainty of future climate. But it is the climate uncertainty against which we want to protect ourselves. It should be the one that determines our strategies.

The principle is simple: Once you use the carbon you pay for the damages it creates. This is not uncommon in situations concerning our global commons. For example, damages caused by the disaster of the Deepwater Horizon in 2010 had to be paid for by the company that caused it. The final claim filing deadline for the court-supervised Economic and Property Damages Settlement program for compensation of damages induced by the oil spill has just passed in June this year.

Since, in the case of climate change the attribution of specific events to the carbon emissions is scientifically challenging, one might withdraw to an attribution of the total damage increase over time adjusted for economic and demographic growth effects. Also the distribution of the money that is collected for the emission certificates needs some thought. But neither of these complications question the principle: incorporate the risk of future changes into the price of carbon to create the right incentive.

Obviously, all costs-of-carbon will come back to society. We will all pay the price for our emissions. The question is how these costs are distributed to create an incentive to best reduce the emissions and thereby the risk of future damages. At the moment, European companies try to assess the decision makers in Brussels because they represent the biggest uncertainty with respect to the future price of carbon. In reality however, the biggest risk for society lies within the uncertainties of future changes of climate itself. To incorporate this risk into the price of carbon is a step that is currently missing.

The Munich Re reinsurance company has calculated the meteorologically induced damages during the past three decades to be of the order of four trillion US$, one of which was insured. That means one trillion US$ of uninsured weather-induced damages per decade in the last thirty years. Integrated over a century, this is the same order of magnitude as the cost of transferring our global energy system onto a renewable path as estimated by the Intergovernmental Panel on Climate Change - and that sum does not even include possible future changes in the intensity of weather extremes as they are likely to develop in a warming climate.

This means that we are currently spending a similar amount of money as we would need to completely transform our energy system just for repairing the damages caused by weather. If we learn how to link changes in this enourmous monetary flow to the emissions of carbon, we will be faster on our path towards a renewable energy system.

100 million years ago, we were given a diamond that has to stay coal, if we want to avoid dangerous climate change. We need to find a way to achieve that. A sensible way is to incorporate the risk of future climate change into the price of carbon so that reducing emissions will become a direct benefit.