It is traditional during the Jewish political holiday of Purim (March 23-24) to present a playful Purim shpiel. In the midst of this volatile election season, allow me to present a Purim parody featuring the brave Esther/Hillary, the righteous Mordecai/Bernie and their divisive opponent, Haman/Donald.​ 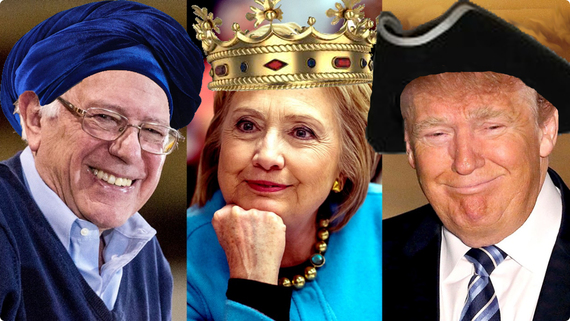 In a land called America,
Lived a leader named Barack Obama,
Who brought about hope and change,
Despite eight years of mellow drama.

When the president's term was over,
They said, "Obama, it's time to go,"
America threw a farewell party,
For POTUS's final show.

America would hold a contest,
To find a new commander in chief,
Months and months of campaigning,
And Super PACs--good grief!

A righteous guy named Bernie said,
"With my chai ideals I should run,"
But instead Senate sister Hillary,
Was well (pants) suited to get the job done,

Opposing Hillary was Donald,
A high-ranking business adviser,
Who bullied and controlled America,
He was the #1 patronizer.

Haughty Donald expected all,
To kneel low when he was around,
He'd shout, "Hey you basket cases,
I demand respect, so bow down."

But Bernie had his own beliefs,
Donald didn't deserve special praise,
He refused to idol worship him,
Or follow his selfie ways.

Donald was filled with rage and wrath,
"Those liberals have got to go!
They're different and don't observe our laws,"
America agreed, "If you say so."

Like a roll of the dice, Donald cast lots,
To set a date for the massacre,
He chose the 8th of November,
And marked it on his calendar.

Bernie sprang into action when he heard,
Donald's hair-raising plan,
He needed to convince Hillary,
Together we must take a stand.

"Hillary, you can save our citizens,
Here's what you should do,
Be brave and convince them,
It's time for a leader like you."

"But no one goes before America,
Without being called upon first,
I could get hurt or lose the election,
That would be even worse!"

I need to create a distraction,
To put America in a good mood,
An entertaining way to dialogue,
About this demagogue Donald dude

So Hillary arranged a great banquet,
A party no one wanted to miss,
She ordered plenty of food and wine,
And put Donald on the guest list.

The day of the banquet arrived,
As America heartily ate its meal,
Hillary gathered her courage and said,
"I have a secret I must reveal."

"I want to break down barriers,
And you should also know,
I'll fight for equality and justice,
If not, we will reap what we sow."

"There is someone among us,
Promoting intolerance in our land,
She pointed to Donald proclaiming,
"Here is that celebrity conman!"

America, you need to tune in,
You're not watching reality TV,
We're choosing the leader of the free world,
You need to think rationally.

We must uphold our national values,
Which worldwide are so admired,
This plot would have destroyed all that,
America told Donald, "You're fired!"

Donald was marched to his tower,
Cursed by an angry mob,
And Hillary, short of an adviser,
Offered Bernie the job!

On the 14th of Adar this Purim,
Dressed in costumes we'll celebrate,
The fact that We the People,
Can save America from a terrible fate.

While Purim shpiels are playful,
Democracy isn't a game,
So whenever "Donald" is mentioned,
Our noisemakers drown out his name.

America can be "so great, so great,"
If we respect one another and recall,
That we're one nation, indivisible,
With liberty and justice for all.