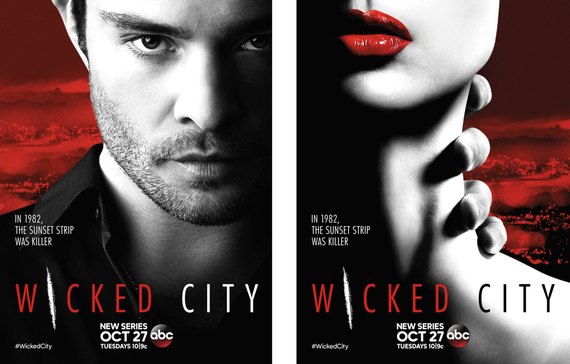 [Spoiler alerts for the premiere of Wicked City ... although I guess the spoiler is in the headline. Sorry.]

I have been itching to post about Wicked City since I first saw the first teaser promo in May. Wicked City will premiere on ABC on Tuesday, October 27th at 10 p.m. eastern/ 9 p.m. central. It is being described by the network as an anthology show, like American Horror Story, that will tell a particular story about Los Angeles each season. The first 13-episode arc is set in 1982, on the Sunset Strip, and tells the story of a couple named Kent (Ed Westwick) and Betty (Erika Christensen) and the cops (including Jeremy Sisto and Gabriel Luna) pursuing them. Interviews with cast members suggest that the showrunners gave them talking points with the keywords "sex", "drugs", "rock and roll" and "murder".

The promos for Wicked City don't hide the fact that Kent and Betty are sociopathic serial killers. But they are serial killers portrayed by popular actors. Ed "I'm Chuck Bass" Westwick has 800,000+ Twitter followers and Erika Christensen was most recently seen on the popular Parenthood. The promos emphasize their highly sexual relationship, their charm, and their quirky humanity. The tension is deliberate. Executive Producer Todd Lieberman explains in an ABC "Inside Look" promotional video: "The juxtaposition between these two characters who are able to show love, not only to each other, but to young children and then on the other side of that, they couldn't be more devious and couldn't be darker and together they form this kind of Bonnie and Clyde-like serial killer duo." (Mickey and Mallory from Oliver Stone's Natural Born Killers may be a better comparison.)

But while ABC is clearly marketing the show from a generic hedonistic serial killer angle (and it says something that such an angle is generic at this point in our cultural development), a close reading of the information released about the show to date makes it clear that something else is figuring into the story that ABC isn't highlighting. And that something else is necrophilia.

In the promo video entitled "'Wicked City' Will Push Network TV Boundaries on ABC," the ABC interviewer asks the four leads: "if you could come up with a hashtag that encapsulates what you think is the most wicked moment of the pilot, what would it be?" Westwick smirks, dodges the question, and looks at Christensen to answer. She nervously laughs and finally lands on the stock response -- "we keep saying sex, drugs, rock and roll and murder." The camera cuts to Sisto, who deadpans: "sex with dead people?" and looks over at Luna. Luna cracks up and adds "post-mortem menage." (And yes, I think that's the first time I've ever heard that phrase) 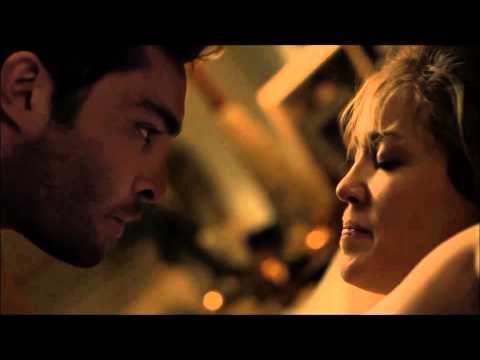 You can watch all of the videos that ABC has posted to promo Wicked City in the past month (Promo 1, Promo 2, and Promo 3) and you won't hear the word "necrophilia." This is somewhat surprising since it is the primary theme of the original teaser trailer, which was released by ABC in May. The three-minute video is no longer on YouTube, but is is on other websites.

The trailer begins with Kent killing a woman that he picked up at a club, then cuts to two detectives discovering her body in a cemetery. Detective No. 1: "No sign of a struggle. He tied her up after he killed her. I'm guessing post-mortem party." Detective No. 2: "Necrophilia?" If that isn't clear enough, the next portion of the trailer shows Kent picking up Betty, deciding not to kill her when he discovers she has children, and then having her play dead while he has sex with her. (See the screen capture from teaser promo above.) "That was weird," she dreamily says to Kent after, "and kind of amazing."

ABC may have taken down the original teaser trailer because it recast a couple of roles (adding Sisto to the cast, for example) after the pilot was shot, but it seems more likely that it did so because it decided to surprise the audience with the necrophilia storyline. (It clearly wasn't removed from the show, as indicated by Sisto and Luna's allusions in the "Push Network Boundaries" official ABC promo.) Downplaying Kent's necrophilia seems like a gamble. If ABC is confident enough to let the storyline remain, shouldn't it be confident enough to disclose it in the show marketing? This brings me to the ultimate issue -- how will people react to a network television show where the romantic lead is a serial killer who practices necrophilia?

Kent is clearly the central character on the show. Westwick is the most popular actor in the cast and the promo photos feature Westwick alone, with Christensen, or standing in the front of the rest of the cast. His photo is most prominently featured on the posters and he is in all of the trailers. This emphasis on Westwick in the show marketing creates an interesting problem for the show. People who turn in to Wicked City because of Westwick (as many will, judging from the Twitter posts with the #WickedCity hashtag), do not want to dislike Kent. The showrunners clearly understand this, as demonstrated by their emphasis in the promos of how his character is humanized by things like sparing Betty because of her children. We've seen a lot of serial killer antiheros on television lately (e.g. Dexter), but I cannot think of a single character in television or movies that the audience is intended to relate to and sympathize with that practices necrophilia.

So why on earth has Kent been written as a necrophiliac? Is the purpose simply to titillate the audience with one of the last universal cultural taboos and show how "edgy" ABC is? If so, why isn't ABC emphasizing necrophilia in the marketing?

It is perhaps more likely that it is intended to make Westwick's character totally irredeemable from the beginning. If so, it will be very interesting to see how the audience and media react. No other sins have proven insurmountable if the audience wants to like a popular male lead. It is a fairly universal theme that tortured bad boys are sexy. In recent examples, Westwick's character Chuck Bass on Gossip Girl committed two attempted rapes in the first half of Season 1 before becoming one-half of the most shipped couple on the show. David Lyons' character Bass Monroe killed one of his best friends and, pretty much everybody else who said "boo" to him in the beginning of Revolution, and then the writers spent the remainder of the show's run trying to humanize and redeem him. There are plenty of other examples: Liev Schreiber as Ray Donovan, Charlie Hunnam's Jax Teller on Sons of Anarchy and Brett Dalton as Grant Ward on Agents of Shield. Sure, they all did really bad things, but there are reasons! They were in pain!

This isn't a new phenomenon. Roger Howarth's character on One Life to Live, Todd Manning (also saddled with a tortured bad boy past) was introduced in 1992 during a gang rape of an established female character. He became one of the most important romantic male leads on the show and migrated with other major cast members to General Hospital following OLTL's cancellation in 2012. Much has been written on the subject.

The closest precedent to Westwick's Kent is probably Evan Peters' character on the first season of American Horror Story, Tate Langdon. The show introduced Tate as a (tortured) bad boy love interest for Violet (Taissa Farmiga, who is also in Wicked City), but halfway through the first season, it was revealed to Violet and the audience that Tate had killed more than a dozen students at his school, raped Violet's mother, and murdered a number of other people. By the end of the season, Violet rejected Tate but it wasn't clear from social media and fan fiction that the entire audience had.

It doesn't appear that the media has picked up on the necrophilia angle in Wicked City yet. There are a couple of online pieces written by people who saw the teaser trailer before it was taken down from YouTube. Most of the press about Wicked City has focused on the fact that two of the leading men from Gossip Girl are in new shows on ABC (Chace Crawford is starring in Blood and Oil as a roughneck version of Nate Archibald).