Massive open online courses, or MOOCs, are garnering lots of attention these days. Some see large-scale, web-based classes as the new frontier for colleges and universities, a great leap forward that could revolutionize higher education. Duke University professor of psychology and behavioral economics Dan Ariely and his colleagues at the Center for Advanced Hindsight, on the other hand, see MOOCs as the perfect way to test Dan's academic funny bone. Will the jokes that work in a traditional college classroom work in a class of say, several thousand online students? 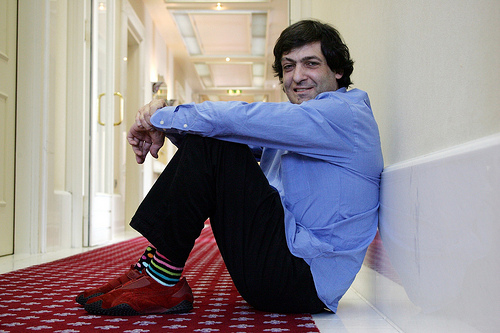 We here at the Humor Code were happy to lend a hand. So as part of his recent MOOC, "A Beginner's Guide to Irrational Behavior," Dan told a joke at the beginning of each week's online lecture video. We asked Dan to predict how funny and how offensive his students would find each of these zingers on a five-point scale, from "not at all" to "extremely." We also had him rate how funny and how offensive he found each of his own jokes using the same scale.

We threw similar questions at the thousands of students subjected to the jokes each week. Using the five-point scale, we asked them how funny and how offensive they found each of Dan's wisecracks. We also asked them to predict Dan's own ratings: how funny did their teacher consider each of his own jokes?

Now that the six-week course has wrapped up, here are the results:

It's clear from the results that Dan's jokes were funnier than they were offensive. All things considered, that's a big accomplishment. According to the Benign Violation Theory, humor has its roots in potentially negative experiences (i.e., violations) that are made to seem okay in some way (i.e., benign). That makes joke telling risky because you can fail by being too benign or by creating too much of a violation. That risk may not be so great when you tell a few jokes to a couple dozen students in a college classroom. But when you're talking about a MOOC audience in the thousands, with huge diversity in what people find funny and offensive, that risk can increase significantly. So the fact that Dan's jokes went over well with his online students? That suggests online courses are a fine place for instructors to crack wise. Either that, or there is something about Dan that allows him to get away with pushing boundaries more than your normal professor.

Though, to be honest, Dan isn't as funny as he thinks he is. He was pretty accurate in predicting how offensive his jokes were going to be - the difference between his jokes' average offensiveness rating and his prediction was just 0.2. But he was far less precise in his funniness estimates. On average, he was nearly a full scale point (0.97) too optimistic about how well his jokes would go over.

Dan might have an inflated opinion of his own sense of humor, but he doesn't come off that way to his students. On average, they predicted Dan would rate his own jokes more than a full scale point (-1.2) below how he actually rated them. Maybe he was a bit overzealous when he gave all but one of his jokes a five on the funniness scale.

As for other conclusions from the study? The results from week five suggest professors should not make jokes about someone's parents having to move in with them. For most people, online or off, nothing about that scenario is benign.

Professor Peter McGraw (@PeterMcGraw) and journalist Joel Warner (@JoelmWarner) have embarked on the Humor Code, an around-the-world exploration of what makes things funny. Follow the Humor Code on Facebook and Twitter. Look for the book in early 2014.