I first saw Hansuke Yamamoto as the Bluebird in San Francisco Ballet's 2006 presentation of Sleeping Beauty. He leaped out from stage right and at such height that it sparked an audible gasp throughout the War Memorial Opera House. Choreographed by Helgi Tomasson, the production was a much-welcomed fix. Sleeping Beauty is all about virtuosic talent. It is the ultimate expression of Classical Ballet. Some of its most familiar musical passages are contained in the Act III pas de deux and variations of Princess Florine and the Bluebird. As our conversation began, I told Hansuke that his eye-popping performance that night is still in my head. "My memory of Bluebird is painful," he replied.

"That was the first time I did the Bluebird. I was excited from the first day Helgi told me I could do the Bluebird pas de deux. Until we rehearsed the variation, I didn't actually realize how difficult it is. I thought, 'Omigod - it's so hard - I don't think I can make it.' I watched Rudolf Nureyev's and other dancers' Bluebird variations on YouTube. 'How do they do that?!' I'm watching them beat the assemblés at the beginning and learning how to make that happen." 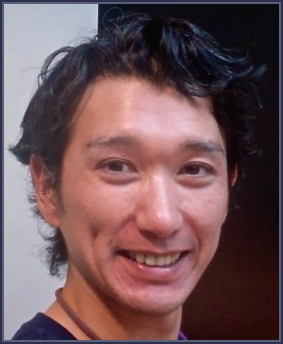 Hansuke Yamamoto. A Selfie for S.M.

"We haven't done Sleeping Beauty since then. From beginning to end, Bluebird is one of the toughest variations. It's very short, less than a minute, but one jump after another. Starting from the corner, there are sixteen or thirty-two brisés volés on a diagonal from upstage to downstage. It's very difficult, but they said I was good enough to do it. I really trained myself for that opening jump, practicing everyday. Then I got tendonitis on my knee. It's not like you've twisted something, but comes little by little. It takes time. All of a sudden, after the jump, I was feeling the pain. My tendon was swollen to finger size. But I did four more Bluebirds. I also had another role, so I danced every show. It took about two years to heal."

This season's opening night performance of Nutcracker had Hansuke placed in center position for the popular Russian Dance - "The Trepak". Three huge Tiffany-type eggs are brought out, each displaying a framed illustration of a Russian setting complete with onion domes. At the downbeat, the dancers jump-kick their way through the paper pictures and begin a minute's-worth of crowd-pleasing squat kicks in presto tempo - the center dancer taking on the horizontal and fully extended shoulder-high jumps. The effect is that it all seems to defy gravity. I had to ask, "Just how high are you?" 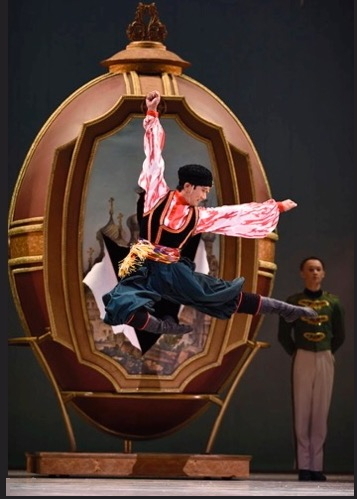 "Not so much. It isn't really jumping. When you've split your legs to the height of your shoulders, you've only jumped about a foot-and-a-half. It just looks high. It's the extension and the rake of the stage above the audience. That's the trick. I can extend to just below shoulder level, but some go higher. I've also done the Chinese dance and the Spanish dance."

Hansuke is featured as the Gypsy King in the company's current presentation of the Tomasson/Possokhov Don Quixote. He was still a member of the Corps de Ballet when assigned to the role for the 2003 premiere. The choreography for the Gypsy King is aggressive and volatile. He exudes sultry passion and fierceness - his potent energy is readily apparent to the equally fiery Gypsy Queen. Her power over him is maddening.

"This is the fourth time I've done the role here since it premiered. The acting, the emotional expression - I usually don't come up with that during a rehearsal. But I'm always thinking about what I will do with it when I'm onstage. I wait to see what comes up naturally within me. I don't practice acting in the studio. I try to see myself - how I'm going to be when I'm in performance - how I will expose it. But I don't do that in the studio. I'm focusing on the dancing technique. Then, in the performance - with the lights and the set - my emotions come out naturally as the Gypsy King. I'm not trying to act like, 'Here I am. Look at me!' It's more that it's here inside of me. I am the Gypsy King. I don't have to 'act' like one. Sometimes it's a little crazy. But in my own way, I think it works for me." 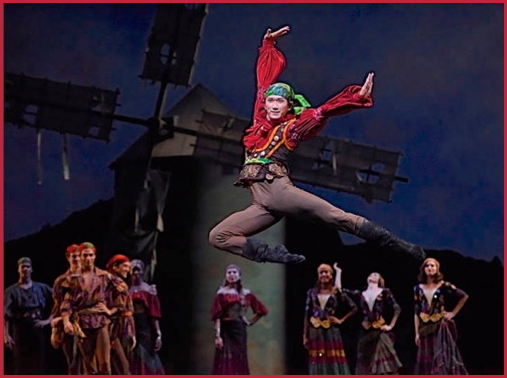 Listening to Hansuke's account of his earliest training, it appears that he has always found a way to make ballet work for him. Born in Chiba, Japan - what he describes as the countryside - watching music videos, especially the hip-hop variety, was part of a normal routine. "I wanted to dance like them," he says.

"Everybody starts with ballet - it's basic dance. I started at a small ballet school where my mother and sister were taking a class. It just continued and I liked going. Then I moved to Tokyo to attend another school. I lived in a small studio by myself. It was hard. It wasn't about feeling lonely. It was hard to motivate myself. I was only fifteen-sixteen. I wasn't really sure what I should focus on. I know I have to do ballet - and it was the only thing I could do at that time. At times, it was tough."

Six months later, he was in London at the Royal School of Ballet - the end result of submitting a simple video showing his bar combination and center combination, no scene work. While at the school, inspiration hit like the proverbial bolt out the blue. In fact, by a principal dancer with the Royal Ballet and one heralded for his electric performance in the role of the Bluebird - Tetsuya Kumakawa. Nothing better than a role model - a Hero - to save a boy's spirit. 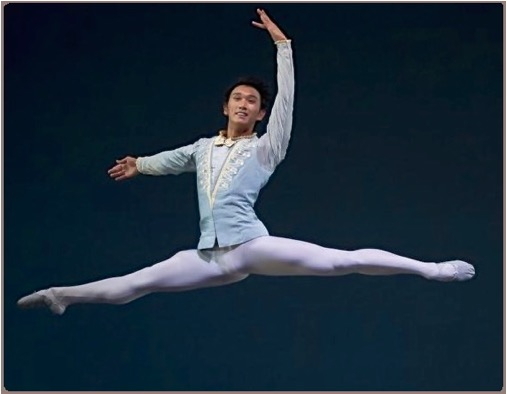 "I graduated from the school in 1998. At that point, I tried to find a job. The school gave a class on how to audition. They explained everything I would need, such as a résumé, a photo. I applied everywhere - San Francisco, Houston, a couple in Germany, the Birmingham Ballet, Dutch National, every audition notice I saw. I actually failed every audition. I couldn't get a job. So, I went back to Japan. I danced with a small company for about six months. It wasn't really a company, more like a school. After six months, the National Ballet of Canada offered me a job - also Pacific Northwest Ballet. I chose Canada and was there for about two years. I didn't think I could fit into the company. I wanted to see more good dancers. Like - more, more, more! More quality. I wanted to be with a bigger company. So, I sent an audition tape here. This time, I danced the Don Quixote variation, the Corsaire variation, and the Tchaikovsky variations. I was then invited to take a class. After the class, Helgi called me in and hired me."

Hansuke joined the Corps de Ballet in 2001 and was promoted to Soloist four years later. To date, he has accumulated an exhaustive résumé of works by such choreographers as George Balanchine, Christopher Wheeldon, Frederick Ashton, David Bintley, Edwaard Liang, Serge Lifar, and Alexei Ratmansky. He has created roles in Stanton Welch's Naked, Helgi Tomasson's Caprice and most recently in Liam Scarlett's Hummingbird.

As for the future? I mentioned "Tybalt" in Romeo and Juliet and "Hilarion" in Giselle. If a work were to be created for him, his composers of choice would be Chopin and Prokofiev. Next season, the Company will travel to China. Perhaps one day they will dance in Japan. Choreographers he admires but whose works he has yet to perform include William Forsyte and John Neumeier.

We both agree that SF Ballet's production of Liam Scarlett's Hummingbird is sensational. A strategic component of the ballet is the pairing of two men during an intense section where the primary focus is on the principal male and female duo. Hansuke and Soloist James Sofranko were teamed together again this season. As there is no storyline - no absolute character definition or "motivation" - the magnetism, the sense of conflict or harmony between the two men is transparent and without guile. In the arena of contemporary abstractions, Scarlett's Hummingbird stands out for its brilliant melding of music by Philip Glass (Tirol Concerto for Piano and Orchestra), the inspired vision of scenic and costume designer John Macfarlane, and the stark contrasts of David Finn's lighting scheme.

"Liam Scarlett is of a new generation," said Hansuke Yamamoto. "In the next few years, he will be considered great."