Soprano Tony Arnold is a luminary in the world of Chamber Music and Art Song. Today's classical composers are inspired by her inherently beautiful voice, consummate musicianship, and embracing spirit. Audiences everywhere recognize her assuredness and mastery over a wide range of musical styles, vocal modes and dramatic challenges. On Wednesday, July 30 and Thursday, July 31, Tony appears at the Santa Fe Chamber Festival with the Orion String Quartet in the U.S. premiere of composer Brett Dean's String Quartet No.2 -- And once I Played Ophelia. Dean's composition was given its UK premiere last May and come November it will be presented in six cities across Australia. With text by Matthew Jocelyn (after Shakespeare), Tony describes the new work as a monodrama. 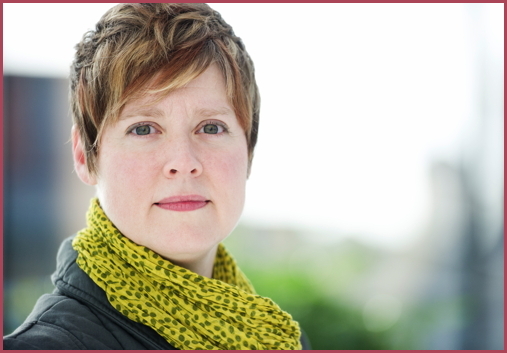 "Many composers have been attracted to Ophelia," said Tony, "mostly because she appears so infrequently in the play, but has this incredible emotional impact. She is also emotionally mysterious. We take her to be young and naive, but I think there are more robust ways of looking at her. That is what Brett Dean is trying to get at in this piece. The words that are used are not only from Ophelia, but also from Hamlet, her father and brother. I am not her character in this monodrama. We are seeing her through the eyes of others -- seeing her react to the way others treat her. Maybe even seeing her from beyond as she looks back or looks over the scene -- an omniscient vantage. It's very extreme, very lyrical and complex. She is conflicted, for sure."

In Act III, scene i of Hamlet, the King and Polonius (Ophelia's father) have set her up in order to encounter Hamlet. They will observe the exchange out of sight in order to determine if Ophelia's virtue and beauty are the cause of Hamlet's strange behavior of late. Hamlet then enters, ruminating on the notion of suicide, "To be or not to be." At the end of his speech, Ophelia enters pretending to read a book. After a brief greeting, she tells Hamlet that she wants to return certain gifts to him. "Rich gifts wax poor when givers prove unkind." Hamlet becomes agitated and begins a string of verbal assaults. He tells Ophelia five times to get herself to a nunnery. By Act IV, scene v, Ophelia has gone mad -- in scene vii, the Queen enters to say she has drowned.

"We're seeing all of her emotions through a prism," said Tony, "and it keeps turning. There are five movements in this continuous piece. We keep seeing her through a new facet of that prism. The first scene is reflective of Hamlet's text, 'Get thee to a nunnery.' He thinks she's being a whore. We're not really seeing her responses to that per se, but she becomes possessed by his words. The text is his, but she is embodying, digesting, and processing his words -- perhaps remembering them in the afterlife, after she drowns. We don't know why she drowns. People speculate that she committed suicide, maybe she didn't. But the weight of the water, the weight of the words, the weight of the opinions of others, the weight of her place in the world -- there are a lot of ways to look at her character." 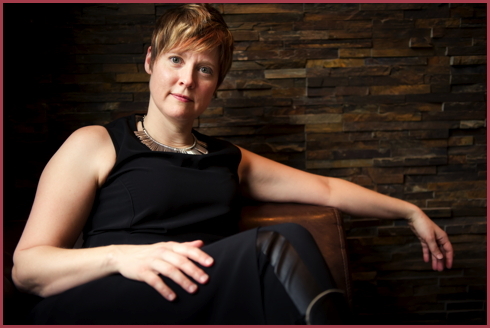 Collaboration is an essential force in the world of chamber music. The renowned Santa Fe Chamber Festival, now in its 42nd season (7/20 - 8/25) is all about collaboration. The creation and presentation of Brett Dean's And once I Played Ophelia, written for high soprano and string quartet, is a great example. The work is a co-commission by the Santa Fe Chamber Music Festival, the Britten Sinfonia, and Australian String Quartet. In addition to the benefits of combining resources, the new work then enjoys exposure around the world. Soprano Allison Bell was featured with the Britten Sinfonia in the UK premiere last May. Soprano Greta Bradman teams with the Australian String Quartet for the November tour which will play to audiences in Perth, Melbourne, Sydney, Canberra, Brisbane, and Adelaide. I asked Tony how she became linked to the project.

"Two years ago, I was invited to the Santa Fe Chamber Festival to sing Requiem: Songs for Sue by Oliver Knussen. It is a great work written in memory of his wife. After hearing me sing this, Marc Neikrug [composer, pianist, and Artistic Director of the Santa Fe Chamber Music Festival] suggested to Brett Dean that he might think about writing a work that would include me. I did not know him before this and I still haven't met him in person. Marc invited me back to do this. It's always an honor to give voice to a new piece."

My first experience of Tony Arnold's exquisite soprano voice was via YouTube -- Virtue, by Christopher Theofanidis. All at once, I'm absorbed into the beauty of the composition and Tony's magnetic performance. Her homepage includes several hours of live performances featuring material by such composers as George Crumb, Eric Chasalow, György Kurtág, Arnold Schönberg, Alban Berg, Julio Estrada, and Josh Levine. Tony's stunning vocal flexibility makes her compatible with every work, her interpretations of the varied texts are rich and nuanced. After several viewings of her mesmerizing rendition of Seven Armenian Songs by Gabriela Lena Frank -- I'm very glad I asked Tony a variation on Cary Grant's classic question, "How does a girl like you get to be a girl like you?" Tony earned a BA in Vocal Performance at Oberlin College in 1990. I asked what she sang when the assignment was about Puccini.

"I never had those assignments," she said. "My teacher at Oberlin was Carol Webber. She really understood to not press young voices that weren't ready to go in a particular direction. She knew that my skills and my tastes were someplace else. She said to sing some songs by Schubert and to look at the other six hundred that nobody ever does. And so I did! I went on these quests - listening to repertoire and, because I had skills as a pianist, read through a lot of stuff at the keyboard, not just with my voice but using all my skills and finding unusual things. Another direction I went was with languages. Nobody was singing the Dvořák songs in the original language. I had a friend who was a member of a Slovak church. The Reverend at that church knew how to speak Czech. I asked him if he would help me with these really cool songs. I had found a repertoire that spoke to me, that was my own. There were no hard and fast expectations, there were no great artists who had made recordings of these songs. I found my own way to sing them - because of a very wise teacher, pointing me in a direction. She knew that if I was trying to imitate what was out there and bend myself into an operatic mold that -- not only might I not succeed -- mostly, I would not be happy."

Tony Arnold is the enchantress who can persuade even the most resistant into the realm of chamber music -- particularly at a live performance, especially in the expectant atmosphere of an event such as the Santa Fe Chamber Festival. Its venues provide a more up-close and personal encounter -- such as with a dazzling contemporary/classical-type soprano in company with a string quartet, going off about a character out of Shakespeare that we've all known or been confused by since high school.

"Because commissioning money is short everywhere, what has been happening more and more are co-commissions. So, here is one piece that gets multiple premieres in multiple areas. When I began devoting myself to contemporary repertoire, it was as much about working with a particular group of people -- not a defined group -- but a certain kind of musician that had a certain kind of commitment to what they were doing. Nobody does contemporary music who doesn't already have a certain level of skill and ability already. More importantly, it takes a lot of time. Within the field, that level of commitment is actually very high. I've always found that to be very gratifying and fun. It's the way I like to work. Since I'm making new pieces all the time, I can often get things written for me and work directly with the composer to get something that fits my voice very well."

"I'm involved in a similar kind of project -- Virtue, by Christopher Theofanidis. It is a co-commission by New Haven Symphony, the Fairfax Symphony in Washington, D.C., and the Adrian Symphony in Michigan. I did the premieres with Fairfax and Adrian and will do the premiere with New Haven in November. It's going to be performed in a church and they're going to do some staging. The piece is based on a work of Hildegard von Bingen. So, with the video we'll have of that - the hope is to present it to a number of other orchestras and see if they would like to perform it. That may or may not involve me. But we'll have done three big things to give this work a springboard, to having more life. That is what's going on with Dean's piece as well. If you do co-commissions like this, it does improve the chances that the piece will be picked up by somebody else."

Tony is coming to San Francisco, November 16 to work with her friend Steve Schick - percussionist, conductor and Artistic Director of the San Francisco Contemporary Music Players. Together they will premiere a new work by George Crumb. On December 8 she will be at UC Davis performing with the Empyrean Ensemble -- seven pieces by graduate student composers she has been working with over the past year. The following May she will perform at Stanford University -- again with Doctoral student composers writing pieces for her. It appears that future sopranos have a growing cache of Chamber material to look forward to.

"Let's hope so," said Tony. "I talk to young composers about that a lot. They need to be encouraged to try a whole bunch of new things. They also need to consider in their writing what kind of tools they want to have, what kind of audiences they want to hear their work and who else they want to have sing it. I encourage them to think about not only writing for my specific voice, but how voices work in general. Some people have affinities for particular styles, some singers have a trumpet for a voice, some have a flute. You need to take a lot of things into account when you start writing for posterity." 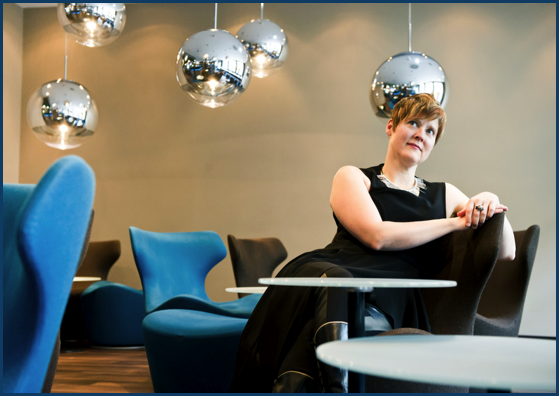 "In a way, Art Music has always been a quiet endeavor. Sometimes that is a hard thing to imagine in our world which is all about grand gestures and big scale -- reaching a lot of people, mass media. That is what recordings and technology have done. That's all fine. But I think there is something about the nature of what we do that is very quiet and reaches people on a level that is body-by-body. If I thought I had to reach everybody, that would just be overwhelming. My dialogue with any audience is an immediate dialogue. It's happening right now and precisely in this moment. Between us. That makes me able to continue to do it."