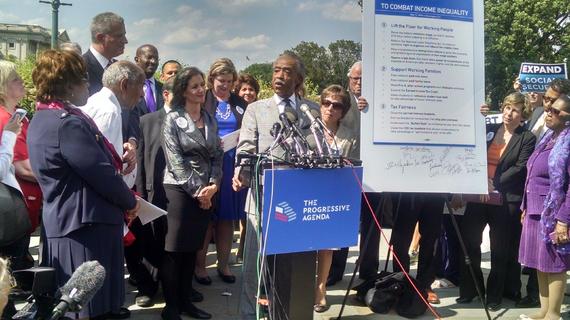 Last week, I stood with many progressive members of the Senate and Congress, labor leaders and other activists all called together by New York City Mayor Bill de Blasio who outlined a 13-point agenda. Even though we didn't agree on certain particulars like trade and minimum wage, we had a consensus that this agenda was something that was needed, timely and must move forward. Progress after all takes precedence over minor differences. We must have the biggest, broadest tent possible of bringing Blacks, Latinos, Asians, the LGBT community and everybody together. The danger we face is people being progressive in their own areas of interest and leaving others areas untouched and unaddressed. That is not how we win equality and fairness, and that is not how we can continue to conduct ourselves. We may have disagreements from time-to-time, but the only way we can move this country in the right direction is to include everyone and address everything from race, gender inequality, homophobia and everything in between.

When I spoke at this press conference last week in Washington, D.C., I warned everyone that in the summer of 1968 (when I was the Youth Director of Operation Bread Basket in New York at the age of 13), we saw a period of great instability. It was the second year of civil unrest from Detroit to Newark to Cleveland, it was the height of the anti-war movement and it was my first year of entering high school where we were pushing for better schools and education. It was a time of immense change; the only problem was that we were more emotional than strategic, more passionate than disciplined. And the result was that in November of '68, Richard Nixon was elected President over Hubert Humphrey. The right-wing couldn't match our passion and emotion, but what they did do was stand back and use this passion against us. They used riots to say we needed more law and order; they used student unrest to say we needed a stern hand; they used anti-war protests to say we needed a concise policy in Vietnam.

My warning today is that we cannot allow the same thing to happen again in our modern era. With all the disputes over who should be included and who should not (many of them legitimate concerns), debates about whether the movement should be led by young or older activists, and the notion that we all agree on everything down to the last detail will be strategically used by the right-wing just as they did in the summer of '68. They will play on our emotions and minor disagreements to maintain control of the Senate and Congress, and take the White House.

There is too much on the line for us to get caught up with minor differences. From racial disparity to income inequality, immigration reform, marriage equality, fair housing, job growth, pay equity, improved schools and much more, the challenges we face are real, and our commitment must be steadfast. In order to keep progress going, our actions must be organized and our steps tactical. This doesn't mean that we agree on every single thing, but it does mean that we are strong enough and prepared enough to put minor disagreements to the side in order to keep the bigger picture in focus. We must have the largest tent possible and make room for all - otherwise those against progress will use our small disputes against us.

It is possible to be both passionate and disciplined; strong in conviction and prepared. These are not opposing ideas. In fact, we should be weary of people more concerned about their own niche, as opposed to the broader progressive agenda. Those that should be taken seriously are the ones that take the mission seriously. We don't want to win battles and lose the war. That's how we end up with a Nixon, a Reagan, a Bush one and a Bush two. Not because we were wrong, but because the right had the right strategy.

We must remember that a progressive agenda must be strategically and precisely pushed.