I refuse to be defined by my passport -- both literally and metaphorically. Surely there's more to an individual than his personal identification number and/or the color of his passport?

There was a time, not so long ago, when I traveled with my parents as a post-Soviet kid, and each time we pulled out our exotic-looking, burgundy-colored passports, which the foreign immigration officials weren't yet accustomed to, they would shower us with numerous questions about Georgia, including the most common: "Country, not the state, correct?" I would then proudly boast about our nation; the iconic Georgian polyphonic music; the first bottle of wine ever produced (in Georgia?!); khachapuri, the predecessor of the widely acclaimed Italian equivalent known under the name "pizza" (Georgian!); and even Gregory Peck, the Hollywood legend whom we (falsely) claimed at one time as our compatriot, allegedly born under the name of Gregory Nizharadze. (He looked kind of Georgian, so why not?) As a tiny fish in a big pond, I thrived on my national identity stemming from an untapped territory.

Years later, as a newly naturalized Russian citizen, I traveled with another post-Soviet passport, which, I would soon discover, failed to open as many doors outside the Russian Federation. "Russkiy?" a one-word question, was often accompanied by a stern look on the immigration officer's face. All I could do in response was limit my answer to a mere nod. No longer sensing an air of fascination that had once made me feel oh-so-exotic, I realized that that fascination had been replaced by a mild case of Russophobia. The one-word question implied a hundred connotations, including but not limited to: "A Russian girl? Oh, she must be one of those new Russians, the nouveau-riche kind."

The times have changed, no doubt. Being Soviet or, as some used to simply refer to all former citizens of every Soviet republic under the sun, "Russian," is no longer exotic while carrying a Georgian passport -- not so unheard-of in this day and age. Although I am now an American citizen with another passport that is not equally loved or despised in every corner of the world, it's another color that represents a completely different set of preconceptions -- some true, others entirely inaccurate.

There are moments when I can't help but feel a severe case of "nationality crisis" brewing inside me. I was born in one country,and bred in another and am currently living and working in what used to be known as the other "superpower," at times even looked upon as my other home's geopolitical enemy, or at the very least a political rival.

Here I am in the Big Apple, on a beautiful midsummer's morning, typing away on another capitalist invention, overlooking the iconic Empire State Building -- some 5,571 miles from my native Tbilisi. Where are my roots, in hindsight? Of course, there's no denying the fact that I was indeed born in Georgia. So that automatically makes me Georgian? But what about over 10 formative years spent in Russia? Doesn't that count for something? Ever since the August 2008 war, the two neighboring nations have officially become political enemies. To further complicate matters, I currently reside in a country that is friends with my native Georgia but is rivals (another full circle?) with my adoptive home of Russia. Is calling New York, and the United States in particular, my "home sweet home" shamelessly unpatriotic?

Besides, what is patriotism? Perhaps it's not so different from isolationism, some might say. Let's compare the two terms in the words of the great, though undoubtedly controversial (due to her un-Soviet Objectivism), Ayn Rand: "Isolationism is the attitude of a person who is interested only in his own country and is not concerned with the rest of the world." One of the alleged meanings of "isolationism" is, in fact, "patriotism and national self-interest." Hmmm.... 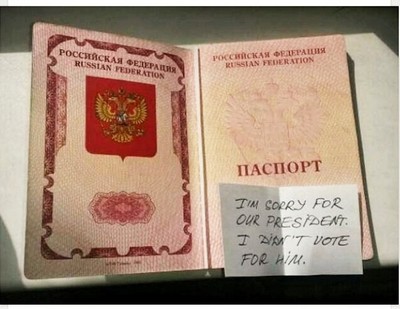 One last thought. A Ukrainian radio presenter, Dmitriy Chekalkin, published a photo (above) on his Facebook page that I shared on my Instagram just minutes later. I was bombarded by both pro-Russian and anti-Putin subscribers: Some called her "an unpatriotic idiot who should be banned from ever returning to the Great Mother Russia," while others applauded and sympathized with the Russian lady who had placed a handwritten note inside her passport at Charles de Gaulle Airport in Paris, as she was crossing the French Border from her native Russia. I wonder if she'll be returning home after all.

This would have been rather funny if it weren't so tragic.