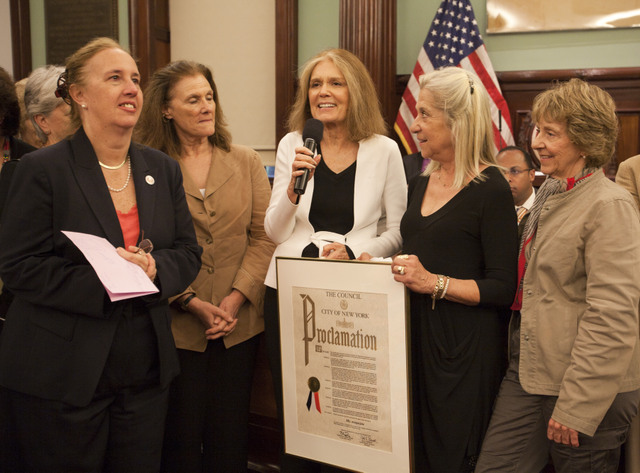 When I first met Gloria Steinem more than 40 years ago, the world was a different place. The women's movement was just beginning, and so Gloria became not only my new friend, but also my touchstone on the many issues that were starting to confront us on the front lines of feminism. We were part of an important new conversation that was going on all across the country. It was apparent that women needed to talk to each other and they needed a place where their minds could meet. So in 1972, Gloria co-founded that place: Ms. magazine, which would instantly become -- and remain -- the indispensable handbook of the women's movement. This week, the City of New York honored Gloria and the editors and writers of Ms. on the occasion of the magazine's 40th anniversary, and so I thought it would be illuminating to ask my soul-sister about the cultural and historical impact of the magazine. Here's what she had to say. --MT

Why did you decide to launch Ms. Magazine? Was it a conscious response to the other women's magazines that were out at the time?

We just wanted to work for a magazine that reflected the changes in our lives. Other women's magazines were in a system that rarely allowed that. I'd been a longtime freelance writer for Glamour and the Ladies Home Journal, so I knew that editors tried their best to include one non-ad-related article and maybe a short story, but that was the most they could do. Remember, women's magazines started out as catalogues with a little "complementary copy" for the ads that were about fashion, food, entertaining and so on. I remember a beauty editor who got fired just for writing that young women probably didn't need moisturizers. There were advertisers who made it clear that they wouldn't buy an ad in an issue with "depressing articles or large-size fashion." It was way too much to expect those magazines to publish news about carcinogens in hair dye, or which clothes were made in sweatshops -- much less a petition from well-known women who'd had abortions and supported reproductive freedom.

This pressure from ads still explains why Ms. -- and other smaller, woman-controlled magazines like Bitch and Bust -- have diverse articles and global news and humor and fiction and exposés that you can't find anywhere else. We were way too optimistic in thinking that Ms. could change ad-dependent women's magazines. But I do see hopeful signs. For instance, there's a whole movement of young women on the web calling on women's magazines to publish at least a few photos that aren't photoshopped to make women and girls feel bad about their real bodies. But if women and girls are to have truthful media they can count on -- in print or on the web -- they'll have to pay for them, as we pay for books, instead of media so heavily subsidized by ads.

If you didn't name the magazine Ms., what would your backup choice have been?

Our first idea was Sojourner, after (slavery abolitionist and women's rights activist) Sojourner Truth, but people thought it was a travel magazine. Then we came up with Sisters, but people thought it was for nuns! I liked Bimbo -- in the spirit of making bad words good, like Slut Walks does now - but that took explaining. So we chose Ms. because it was not only symbolic, but short and took up less cover space. We actually found that word in secretarial handbooks of the 1950s, as a way of dealing with the embarrassment of not knowing whether a woman was married or not. But later, we discovered it was on a tombstone from the 1700s; and in England, it had been in use for centuries as an abbreviation for "Mistress." Since even children were called Master and Mistress, it meant female without marital status.

What kind of impact were you hoping to have when you launched? Can you think of five words that were the mission of Ms. magazine when it first rolled off the presses?

We wanted to arrive in women's lives as a portable friend with information, support, community, laughter and new ideas. We also didn't want to embarrass the movement by failing. I can't tell you how relieved and happy we were when the Preview Issue -- cover-dated "Spring," in case it sat on newsstands for months -- sold out in just over a week.

What kind of backlash was there?

Anything feminist was the object of ridicule, and especially that there would be enough interest to support a national feminist magazine. I remember a few subscribers who asked if it could be sent in a plain brown wrapper!

What kind of response did you get from the media?

Harry Reasoner famously went on air to say Ms. couldn't last. The editor of Newsweek had taken me to lunch to warn me that we could only succeed if we positioned ourselves against lesbians - so of course, we included a lesbian article in the first issue. The New York Times printed the name of the magazine, but called all of us "Miss" - and refused to use Ms. as an optional form of address for the next fifteen years. An advertising guy sent me Ms. with every reference to sex highlighted with a yellow marker, to show why he would never advertise. Mostly, it was reported pretty accurately, but treated as an oddity that couldn't last.

Describe to me the typical reader of Ms. magazine that first year of its publication. What do you think that woman is doing today?

You can't describe the Ms. reader except by state of mind. Back then, the typical reader letter said some version of, "At last, I know I'm not alone!" I remember a 70-year-old who was taking her birth-name back, and a seven-year-old who wrote in crayon to say the girls were trying to get more room on the playground -- and there was every age and situation in between, from women executives trying to get equal pay to women trying to get off welfare. We were always what researchers call a "psychographic," not a demographic. If I had to name our reader's single most shared characteristic -- then and now -- I would say it's hope.

Which issues were the most controversial in their time?

Any issue of equality was controversial to people -- including some women -- who felt that the normal male/female relationship was 60/40 or 70/30. Even 50/50 felt threatening. Erotica and pornography were controversial, even though the difference is present in the words. ("Eros" means sensual love and "love" implies mutuality and free choice, while "porne" means female slaves and so the absence of mutuality.) But some felt that criticizing pornography was criticizing sex itself, and others that erotica couldn't co-exist with current inequality. This controversy is still out there, though now that millions more women have actually seen pornography because of the Internet, there's more understanding that it's about domination and violence. I'm happy to say that, now, there's a T-shirt that says: "Eroticize Equality!"

In the early days of the magazine, it was considered controversial to put a black woman on the cover. But you did that anyway. What was the reaction from distributors?

Magazines are very dependent on newsstand distributors, and they were telling us that in the south that Ms. wouldn't even be taken out of boxes if we put a black woman on the cover, which we knew could be true; and that if we were on the stands, only black women would buy us, which we knew was untrue. In any case, Ms. did it anyway. We also put older women on the cover, and women who weren't thin, and Billie Jean King with braces on her teeth.

Where there any issues that were off-limits in Ms. Magazine?

Since all issues are women's issues and transformed if they're covered as if women mattered, I can't remember one that was off limits per se. As a remedial magazine, we probably were least likely to cover whatever was already being well covered.

What were some of your favorite covers? Why?

My all-time favorite cover was a painting by Miriam Wosk, a Krishna-like woman with many arms, with symbols of women's occupations in each hand, with a baby growing out of her stomach, and with a tear running down her face. I loved the universality of its symbols and that the woman was blue like Krishna. More than 30 years later when I was in India -- where I lived for a couple of years after college -- a group of Dalit women in Bangalore were doing a small magazine for villagers, and they used the same image on the cover, not because of Ms. but for the same reasons we did: to express women's many roles.

Otherwise, my favorite covers were the ones that made news: the 1976 cover of a woman with a bruised face, making us the first national magazine to address domestic violence; a cover about men and feminism; and one about sexual harassment, that a major chain refused to display on its newsstands.

What's the one thing that gives you most hope about the younger generation's concept of feminism today? The least hope?

Young women have higher standards and better shit detectors than we ever did. What gives me the least hope is that younger women are still less likely to vote.

What would you still like to see on the cover of Ms. Magazine?

The first woman of color who's President of the United States. Also reproductive freedom as a global human right. And one generation of children raised without violence, including the violence of roles based on how they got born.

If the publisher of Ms. called tomorrow and said, "Ms. has outlived its usefulness -- time to close up shop," what would your first line of defense be?

An eye and ear exam for whoever said that.

Walter Cronkite once said, "If I could do it all over again, I'd be a song-and-dance man." What's your secret other profession?

Why have you never asked Hugh Hefner to pose for a centerfold in Ms. Magazine?

Even I, who can measure the ways Hefner has been a blight on humanity -- men as well as women -- wouldn't put him through that humiliation!