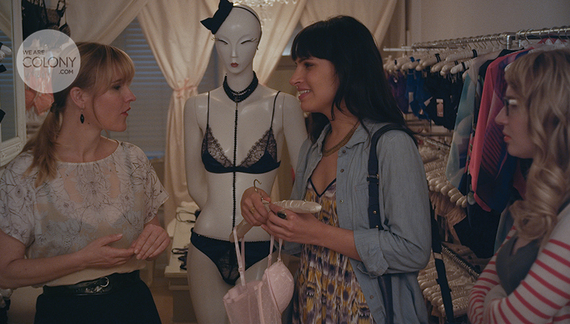 Shirin's sitting on the subway, half-listening as her friend talks about a recent failed date. As they approach the next stop, Shirin sees her ex-girlfriend standing on the subway platform talking on the phone. They make eye contact. Shirin waves, a small smile creeping across her face.

"She's on the path to being okay," writer and director Desiree Akhavan says of the main character, Shirin, whom she plays in her debut film, Appropriate Behavior. "I really wanted to be true to the experience of love and life, which is that you move on in tiny little baby steps."

Appropriate Behavior, which premiered at Sundance this year, follows Persian-American Shirin, a bisexual teacher living in New York City, as she moves on after breaking up with her girlfriend Maxine. "I was making The Slope at the time, so I really loved writing about this unhappy couple that you could kind of fall in love with, even though they weren't right for each other."

The Slope is a web series set in Park Slope, Brooklyn, that chronicles the relationship of Desiree and Ingrid, self described "superficial, homophobic lesbians."

What Akhavan does so well is depict her characters in an authentic, human way -- whether they are full-fledged characters like Appropriate Behavior's Shirin and Maxine, or The Slope's more caricatured Desiree and Ingrid. Her queer characters are not defined by their queerness, they are as flawed and diverse as so many straight characters in film.

"I didn't want to make a queer film that led with its queer foot," Akhavan says.

In life, I don't lead with my queer foot. I feel like a normal, flawed human being, and I think that when we limit our queer characters to these narrow confines, it's inherently homophobic, like there's no other narrative of your life other than the fact that you're queer, that's the only thing that affects your day-to-day.

In Appropriate Behavior, the attraction between Maxine and Shirin is magnetic and immediate. As the film progresses, we slowly witness their incompatibilities push them apart. The narrative focuses on Shirin's self-discovery and how she moves forward.

While the film doesn't revolve around sexuality, through the character of Shirin, Akhavan sheds light on an otherwise underrepresented group of people. "No one believes in bisexuality," Akhavan says.

Furthermore, Akhavan's point of view is refreshing at a time when queer media is over-saturated with the gay, white male perspective. "It has to do with money," Akhavan says.

Gay white men spend money on film and TV, and they go to the cinema and they go to plays, and lesbians don't pay as much for things. The statistics that we hear from distributors are that lesbians illegally download the movie, or they share the DVDs. You vote with your money.

Despite the statistics, Akhavan will continue to make work centered on queer women. Her next comedy, developed at the Sundance Institute Episodic Story Lab, focuses on a lesbian woman who comes out as bisexual in her thirties and starts dating men for the first time.

She's also working on her next feature film, an adaptation of a young adult novel. With so many varied and unique projects in the works, it's hard to understand why some critics have unfairly labeled Akhavan's work the "Lesbian-Persian Girls Knockoff."

"The term 'knockoff' is what stings the most about that," Akhavan says, "It really has certain implications of unoriginality and stealing."

But Akhavan's work is anything but unoriginal, and thankfully she doesn't let the critics hold her back. "If I were to stop making my work because someone was out there making it on a higher level," Akhavan says, "I think that'd be a really disingenuous and bullshit response."