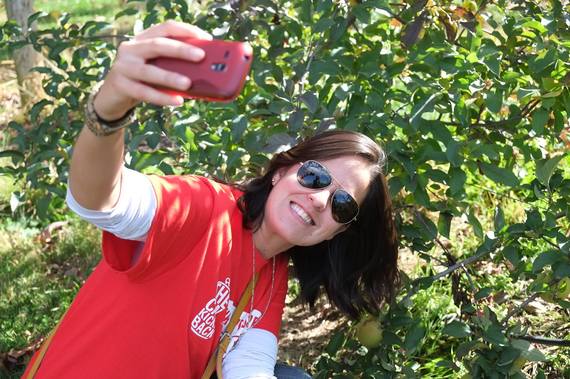 My mother is the kind of person that has chosen to stay away from social media. To her, the idea of posting what she would call "intimacies" on the internet for the world to see is revolting, not because she's opposed to establishing human connections through technological means but because she's working under the wrong assumption that social media users organically post everything that happens in their lives in an authentic, non-curated manner. LOLZ.

No, mom: photographic social media updates are not a window into someone's life. They're just like the tricks that the Wizard of Oz used to make himself "great and powerful," meant to design a larger-than-life persona that's merely a distortion of the authentic, less-than-extraordinary man behind the curtain.

With authenticity out of the equation, creative license kicks in. With it comes to a parallel dimension in which people believe they can get away with behaving in ways they would never in real life. No one in a normal, real, three-dimensional conversation, would get away with bragging about their charitable heart or their effortless beauty without being branded as a self-absorbed jerk. But on photographic social media, the mere comfort provided by the number of likes can be enough to numb self-awareness; self-absorption becomes an acceptable fare. When the desired outcome is envy, it doesn't matter how much truth there is in the oft-repeated adage that being semi-famous on the Internet is about as useful as being a millionaire in Monopoly. So to get my mom started, I created a useful guide to navigate the world of digital narcissism, categorized by common day-to-day situations and including a bank of words with preceding pound signs to choose from.

How To: Show Solidarity
Much like engagements, random acts of charity don't actually go into effect until photographic evidence of their existence is posted on social media. Ideally, photos must be paired with a heartfelt caption that includes a quote attributed to someone known for their philanthropic heart. Think Mother Theresa or Bill Gates. Accuracy in attribution is not necessary, as long as the quote includes the word "change".

Alternatively, use the picture as an excuse to tell the story of how needed your help was and how much your heart bleeds while the world seems to go on posting their dinners to the Internet while you're out there in the streets/Darfur/an animal shelter just caring your heart out. Extra points for the picture if the lucky person at the receiving end of the noble act is actually photogenic, no need to tell them in advance that the act of random kindness they will be benefitting from comes with strings attached: They must pose! However, never forget there's strength in numbers. In the goodness scale, a blurry selfie in the middle of a throng of sweaty, dark-skinned kids grinning in a village beats a high-definition close-up of your do-gooding self with the do-goodee in an urban setting. Hashtag bank: #give, #bethechange, #randomactsofkindness (actual randomness or kindness not required), #changetheworld (actual change not required)

How To: Live The Cool Life
Make your audience wonder what you do for a living. Never -- unless your job description is literally "shark-tank swimmer" -- post pictures of what your job actually looks like. Excel, conference calls, Google Docs and deadlines might bring home the bacon, but won't give you any social media bacon, aka likes.

Instead, substitute work photos with (insert liquor, coffee or nail) bars chock full of exposed-brick or urban walks crossing busy streets, conveniently posted during your work schedule. Meals and their accompanying location are only worth posting if the dish is either big (whoa, you eat a lot), exclusive (they've been booked for months, how did you get a table?), well-lit and aesthetically pleasing (is that a steak or a cherub?) or latte art (lactose and hearts, amirite?). Tupperware with leftovers will get you nowhere: go eat them alone in your corner of shameful boringness without leaving digital trace.

Also, remember all traveling must be appropriately documented by providing a picture of an airplane wing and captioning with the to/from airport codes. Note that the one time you attended that awesome party or traveled to that cool destination has basically no expiration date, so you can post pictures from it until the end of time as long as you pair them with the appropriate hashtag. Hashtag bank: #blessed #nomnom #foodporn #upintheair #paradise #throwback #takemeback

How To: #Shameless Selfie
Maybe your hair looked extra good today. Maybe you smiled at the right moment at the right angle at the right time. Perhaps you just gave your skin an instant spa treatment with your Photoshop Express skills. Maybe you're uncommonly pretty and you refuse to deprive the world from the light that emanates from your being. Or maybe you feel like the opposite is true and you are bravely becoming a lone warrior of the self-love crusade, single-handedly disarming with one selfie centuries of gendered/social/patriarchal body image expectations.

The "shameless" prefix is vital in the caption to quiet the murmurs of the haters who might question what the value-add of an unsolicited self-portrait is to the universe of all social media. It allows that picture of yourself to go out to the universe without validating Regina George's guilt-inducing accusation: "So you agree? You think you're really pretty?" Hashtag bank: #iwokeuplikethis #sorrynotsorry #shamelessselfie

How To: Work Out
Of course you need to post a picture immediately, for every time you work out! Ideally including details about the difficulty of the workout, your pace, calories burned, miles run, and cardiac family history. How else would you stay accountable? Fear not though, accountability doesn't mean posting pictures of your cheat meals -- which could lead people to believe those exist in your impeccable nutrition -- or of the times you slept through your alarm, let alone the times you fell on your butt while trying that yogasmic tripod stand.

Make sure you let all your sedentary followers know which things you saw on your run, since they're probably invisible to the naked, non-runner's eye. For full effect, make sure to post your outdoors rainy workout as early as possible, so you catch your audience while they're still in their warm bed, only then they'll know who's boss. It's also widely known that Crossfit effects are reserved only for those who post about their WOD. Get posting: not telling the world that you ran a marathon is actually harder than running one, so do tell. Hashtag bank: #wod #beastmode #seenonmyrun #playhardworkharder

Disclosure: Though a frequent user of a popular photographic social media application, the author of this satirical guide doesn't specially thrive on the medium.