Ramadan is a month of fasting many Muslims observe to commemorate the first revelation of the Qur'an to Muhammad according to Islamic history.

Because the cycle of the lunar calendar does not match the solar calendar, the dates of Ramadan shift by approximately 11 days each year. In 2016, Ramadan is expected to begin on Monday, June 6, in the United States, although the date is only confirmed once the moon is sighted.

Ramadan is the 9th month of the Islamic calendar. The term Ramadan literally means scorching in Arabic. It was established as a Holy Month for Muslims after the Quran was revealed to the Prophet Muhammad in 610 CE on the occasion known as Laylat al-Qadr, frequently translated as “the Night of Power.”

“The month of Ramadhan [is that] in which was revealed the Qur’an, guidance for the people and clear proofs of guidance and criterion. So whoever sights [the new moon of] the month, let him fast it; and whoever is ill or on a journey - then an equal number of other days. Allah intends for you ease and does not intend for you hardship and [wants] for you to complete the period and to glorify Allah for that [to] which He has guided you; and perhaps you will be grateful.”

During the month of Ramadan, most Muslims fast from dawn to sunset with no food or water. Before sunrise many Muslims have the Suhur or predawn meal. At sunset families and friends gather for iftar which is the meal eaten by Muslims to break the fast. Many Muslims begin the meal by eating dates as the Prophet is believed to have done.

This ritual fast known as
Sawm
is one of the five pillars of Islam, and requires that individuals abstain from eating, drinking, smoking and sexual intercourse.

To find the specific times for Ramadan fasting, click over to this helpful tool provided by IslamiCity that allows you to calculate prayer schedules — including sunrise and sunset — by entering your city or zip code.

Non-Muslims are free to participate in Ramadan. Many non-Muslims fast and even pray with their Muslim friends or family members. Non-Muslims are often invited to attend prayer and iftar dinners.

What is the ‘goal’ of Ramadan?

PHOTO GALLERY
Ramadan, From A To Z

A Quick Lesson About Ramadan, The Muslim Month Of Fasting
Ramadan, From A To Z 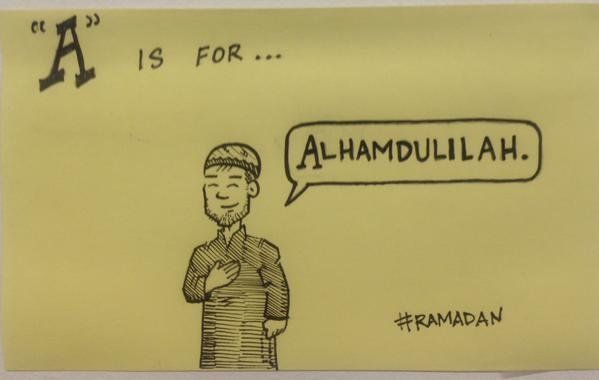 1 / 26
Alhamdulilah is a phrase Muslims say to give praise to God. "All praise is due to Allah, Lord of the Worlds," Elrashid says.
ADAM Y. ELRASHIDI