Disclaimer: I've worked at both Apple and Spotify in the past.

The public release of iOS 7 included iTunes 11 and iTunes Radio. I'm excited about iTunes Radio for one big reason: Internet Radio services are a great way to discover new music. Pandora, iHeart and Spotify Radio do a great job but each is limited by it's catalog and it's algorithms. Apple has a different catalog of music and (hopefully) different algorithms for selecting music for a radio station. iTunes Radio could be a great opportunity to discover something new!

I chose to compare just Spotify and iTunes radio because I've worked at both companies and I know a little bit about what goes on behind the scenes. They also have two completely different business models. Apple is all about downloads and purchases. Spotify is all about streaming and subscriptions. iTunes Radio is a convergence of sorts: A streaming service with the goal of getting you to click the purchase button. 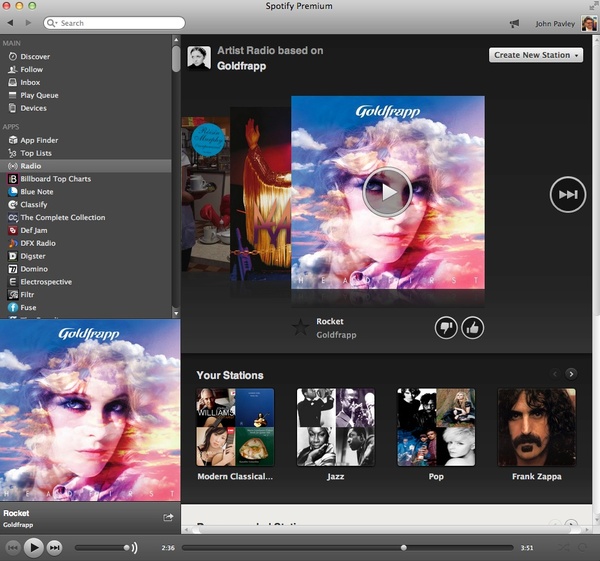  Spotify Radio is a mature product that's been around for over a year. It's easy to use and easy to navigate. It's also fully integrated with their subscription service. If you have a subscription, like I do, its simple to add a track from the radio to your own playlist. Spotify, like all streaming services works best on a wired or wireless connection. But Spotify is usually better than the other services on 3G. Spotify, like all streaming services, is at its worst in a moving car or walking around in a big city. In those situations you get pauses and dead air, but that's not a particular Spotify problem -- that's a problem with our mobile phone infrastructure. Spotify ads are annoying but it's music sounds great and it's one of the best implementation of a radio service available on the market. 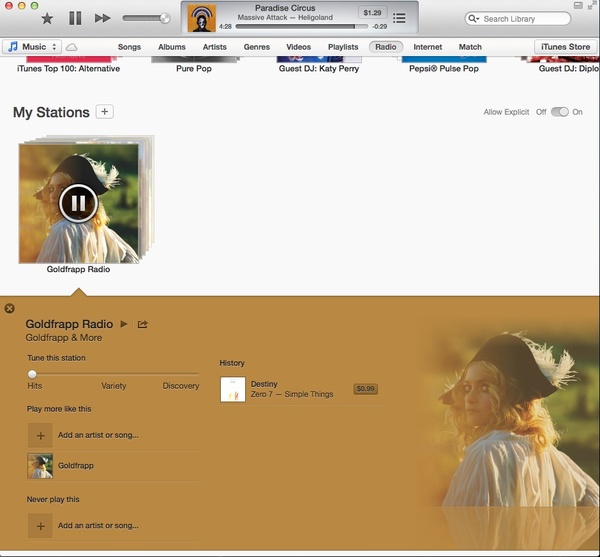 iTunes Radio is a new product and it's clear that it was just launched. It's not so easy to use nor to navigate -- it has the feeling of a very hasty design. But it's fully integrated with Apple's download service. There is a nice little button in the player, that appears if you don't already own a track, that gives you a one-click purchase. Just like Spotify, iTunes Radio works best on a wired or wireless connection. But Apple was actually better on my tests on 3G than Spotify -- which really shocked me! My testing is not definitive so a more rigorous person should be consulted. After an initial pause 3G streaming over iTune radio was smooth even in a moving car and when walking around NYC. Apple's ads are less annoying than Spotify's ads. iTunes music sounds just as good as Spotify and has the potential to be another great radio service in an already crowded market.

The tracks played by iTunes and Spotify for a comparable radio station were completely different. I didn't hear a single song shared between them for the stations I tested. Both Apple and Spotify have millions of tracks and I didn't bother testing their popular music stations. I wanted to go deep and hear new stuff and discover greatness. Both services are an abundant source of music you probably like but probably never heard before.

So, to my friends at both Apple and Spotify, I say: Congratulations! I'm keeping you both!