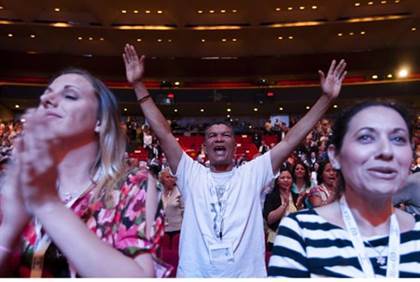 Jews don't tend to have mega-churches. First of all, we're a small population. The Sunday attendance at one mega-church could well be greater than the entire Jewish population of a mid-sized city.

In fact, I had that feeling two weeks ago when I spoke at a mega-church in Grand Rapids, Michigan. The Jewish population of the city does not match the more than 2,000 people who gathered there that morning.

I was at the church to talk about my book on Passover for Christians. But I was also there to build bridges. (The video of the sermon is here.)

Many Jews have stereotypical views of Evangelicals. They want to convert us. They believe Jews need to go to Israel to help speed up the Second Coming. They believe Christianity superseded Judaism and Jews are not "saved" by God's grace.

These stereotypes may persist, but they lack validity. If we are to build meaningful and enriching bridges--bridges that enhance our faiths and ourselves--we need to address and overcome our lingering fears. These fears include the following:

1. Evangelicals want to convert Jews: Yes, some do. And some use manipulative techniques in doing so. That is a reality we need to recognize. But the vast majority do not. Evangelical is a broad term generally referring to those who believe in a Trinitarian God. It does not automatically imply a desire to convert others.

In fact, evangelicals often have a deep appreciation and respect for Judaism. After a talk I gave at a church last year, a woman approached me and told me she wished she had been born a Jew so she could know what Jesus experienced. Moved by her words, I asked her what--aside from being reborn in a different era--could help her gain that knowledge. "Learning more about Judaism," she said. (During the sermon, I talked a lot about the Jewish roots of Christianity.)

2. Evangelicals think Jews need to go to Israel to create the condition for the Second Coming: Again, yes, some Christians do believe this. But my experience suggests it is a very small proportion. Rather, the vast majority see Israel as a sacred land revitalized by the Jewish people. Conversion and the second coming are not the basis for their connection to the land.

And even if it were so, I would not be troubled. In Judaism, deeds matter more than creeds. So long as we can converse and co-exist peacefully, we need not to be threatened by what another person believes.

3. Evangelicals are not open-minded: Describing any group as not open-minded is dangerous. We tread on dangerous ground when we begin to presume what another person--let alone an entire group--believes.

My experience has been the opposite. I have found those with a deep faith often have the confidence and perspective to appreciate and learn from the faiths of others.
Rabbi Jonathan Sacks reveals this truth in a beautiful story: "Imagine two people who spend their lives transporting stones. One carries bags of diamonds. The other hauls sacks of rocks. Each is now asked to take a consignment of rubies. Which of the two understands what he is now to carry?

The man who is used to diamonds knows that stones can be precious, even those that are not diamonds. But the man who has carried only rocks thinks the stones are a mere burden. They have weight but not worth. Rubies are beyond his comprehension.

So it is, he said, with faith. If we cherish our own, then we will understand the value of others. We may regard ours as a diamond and another faith as a ruby, but we know that both are precious stones.... True tolerance comes not from the absence of faith but from its living presence."

To that, I think both the church and the synagogue can say amen. You can also do so by watching the video of the sermon here.