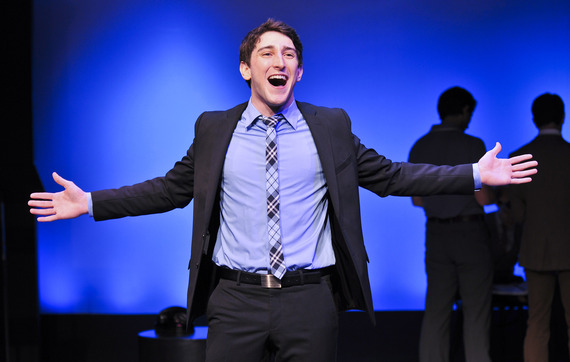 Ben Fankhauser in Stephen Sondheim's Saturday Night. Photo: Jenny Anderson
Charm comes bounding over the footlights in Stephen Sondheim's relatively little-known Saturday Night, which remains at the York until Sunday afternoon. Featuring an energetic stageful of accomplished young professional actors--with the music supervised by longtime Sondheim conductor Paul Gemignani--the show plays delightfully well in the York's under-dressed, script-in-hand Mufti series. While not high-powered musical theatre, this staged reading of Saturday Night hits just the right note and should please just about everyone the York can fit into their intimate house in the basement of the Citicorp building.

This is the master's earliest professionally-produced musical; that is, it is his earliest musical to receive a professional production, albeit 40-odd years later. The show was announced for a 1955 Broadway opening; it was again announced after the success of Gypsy, as a 1959 Bob Fosse production; and it then languished on the shelf until small productions at London's Bridewell Theatre (in 1997) and New York's Second Stage (in 2000). What was finally revealed was a light, enjoyable score which understandably lacks the sophistication the songwriter shortly thereafter displayed with his lyrics for West Side Story and Gypsy. A few of the songs sound like the real Sondheim, to our ears, but most belong in the promising/endearing category. (The book by screenwriter Julius J. Epstein is on the clumsy side, but that is beside the point. Epstein, a 1941 Oscar-winner for Casablanca, was a decidedly unlikely Sondheim collaborator.)

The two leading players are especially ingratiating. Many of us came to know Ben Fankhauser during his long run as Davey, the analytical co-leader among Disney's Newsies. Here he gets to play the young hero--actually, the amorally anti-heroic hero--and reveals that he has a full set of talents. He is paired with Margo Seibert, lately the leading lady of Rocky and before that the impressive heroine of the off-Broadway Tamar of the River. When these two sit on the front porch in Brooklyn and sing "So Many People"--the earliest item on Sondheim's best song list--the audience is positively enveloped in stardust. 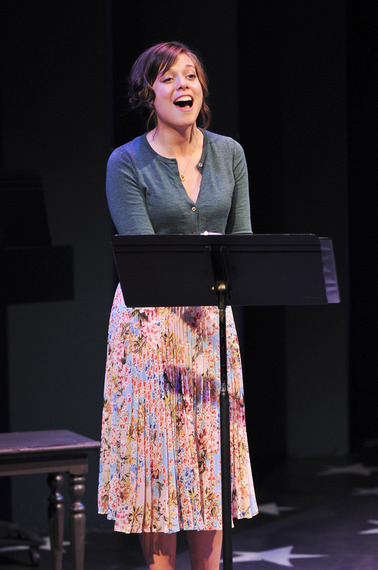 Margo Seibert in Stephen Sondheim's Saturday Night. Photo: Jenny Anderson
The third standout is Lindsay Mendez (Dogfight) as the hero's older-and-wiser sister. Mendez is a delight, especially during her big numbers "In the Movies" and "I Remember That." Andrew Keenan-Bolger--the boy with the crutch from Newsies--gives another one of those typical-for-him endearing performances; Dana Steingold (Calvin Berger) is sympathetically amusing as the wallflower Mildred; and the quartet of boys fated to sit around "on a Saturday night alone"--consisting of Jeremy Greenbaum, Matthew Bauman, Greg Kamp and Jared Loftin--is exceedingly winning. Stafford Arima (Altar Boyz) directs, with Mark Mitchell at the piano.

This is the 100th offering in the York's Mufti series, and is perfectly well-suited for the occasion.
.
Saturday Night, a musical with music and lyrics by Stephen Sondheim and book by Julius J. Epstein, opened November 9, 2014 and continues through November 16 at the York Theatre 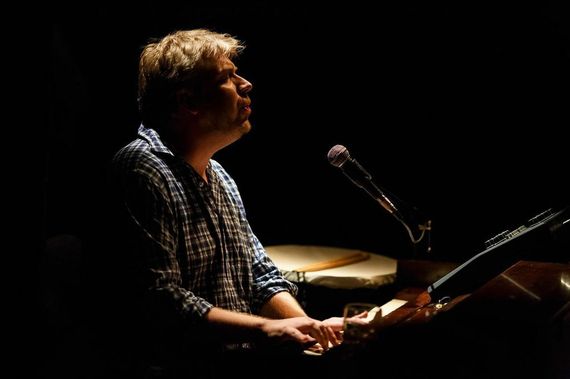 Dave Malloy in Ghost Quartet. Photo: Ryan Jensen
I didn't get to Dave Malloy's Ghost Quartet until last Friday night, the day before it closed, but it merits discussion.

This is the new four-character musical whatnot by and featuring Malloy, who rattled the musical theatre world with his unexpected and unlikely Natasha, Pierre and the Great Comet of 1812. Ghost Quartet is performed by four singer/musicians, including Malloy (who originated the role of Pierre) at the piano and Brittain Ashford (who played Sonia, Natasha's cousin and confidant) on a handful of instruments. Malloy is as affable and friendly this time out, and Ashford again does some astonishingly good singing. They are joined by Gelsey Bell (who played the eccentric Princess Mary in The Great Comet) and cellist Brent Arnold.

Malloy's music and lyrics are as arrestingly iconoclastic as they were in the earlier musical, with a fair share of slashing rhythms and unearthly vocals; again, some sections are thoroughly ravishing (like "I Am Not a Hero" and--if I decipher my notes correctly--"Soldier & Rose.") The story--about a pair of dead 19th century sisters mixed in with someone riding in the subway every night staring at a game on his iPhone--is at this point a little too hard to follow; I suppose that War and Peace offered Malloy a simpler storyline. This one mixes The Fall of the House of Usher, Scheherazade, the Witch's Curse from Into the Woods and who knows what else. Baffling, perhaps, but ever-fascinating. The black and white programs, mind you, are artfully splattered with blood. (Let it be added that the journey to the Bushwick Starr, out in the wilds of Brooklyn, turned out to be not so dire as anticipated; the cozy venue, up a steep and narrow stairway, is a mere half block from the subway.)

Ghost Quartet is segmented like an old LP--the songs are each announced by the side and track number. This somehow leads them to present most of "side 3" totally in the dark, except for scraps of glow tape on the floor. (At the end of this eccentric sequence, the cast starts to appear in dimly glowing splotches of light to great effect.) There is also a wildly exuberant number ("Any Kind of Dead Person") similar to the "Balaga" number in The Great Comet, in which the musicians distribute percussion instruments for audience members to play. They also pass around plastic cups and bottles of whiskey, with Malloy inviting anyone who needs ice to climb over to an ice chest next to the piano.

The audience-as-rhythm-section is repeated during the final number, "The Wind & Rain," which ends with a startling coup de théâtre that I don't imagine anyone other than Malloy would devise. He is presently preparing Preludes--a fantasia about Rachmaninoff in hypnosis--which is scheduled for Lincoln Center Theater's LCT3 this spring, and one can only imagine what splendidly melodious wonders Malloy has in mind for us.

.
Ghost Sonata, a musical with music, lyrics and text by Dave Malloy, opened October 8, 2014 and closed November 8 at the Bushwick Starr