Perspective....it's a hard thing to learn sometimes, but yesterday I heard someone talking about an emergency and my mind drifted back many years to a small Alabama town where I was redoing a whole house for someone....new curtains, carpet, furniture, some new...some recovered....a general facelift to get rid of the unsightly double chins and crow's feet throughout the home.

Since I was far away from Montgomery and the people I normally use, I worked with local people that the lady of the house knew and loved. It turned out I met a wonderful series of characters who were delightful to get to know, especially the upholsterer. 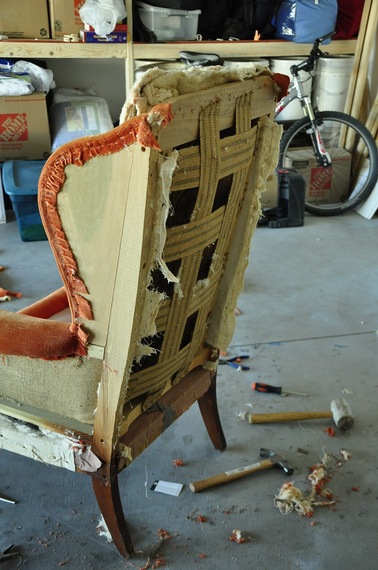 I am deliberately leaving out details about where and when....but I will never forget the day I pulled up in the yard, slightly overgrown with weeds, out in the country to meet..... let's just call him Mr. Jim.

Mr. Jim had been in the army for a number of years before retiring as a sergeant. He tended to dress in camouflage cut-offs and a tee-shirt that usually featured either the army or the University of Alabama....just depended on his mood and which baseball cap he had chosen for the day's ensemble. Various orange cats lolled about his place feigning disinterest in everything. It was so quiet out there you could hear the wind blow.

I walked inside his barn/workshop/general utility room, one side covered in a large metal sign he had removed from some building that was five minutes from falling down...he had a microwave, coffee pot, and a small refrigerator packed with Pabst Blue Ribbon. He was set.

I was wearing the usual heavily creased khaki pants that could stand up on their own, ironed-and-starched-within-an-inch-of-its-life-long-sleeved-button-down-shirt, and penny loafers shined such that you could see your face in them in this place that had never seen the modern invention of air-conditioning. Since the heat outside was UnChristian in the midst of a horrifically humid Alabama summer, I secretly wished I had dressed just like Mr. Jim but there was that 'image' that for someone unknown reason most of us feel we have to present...Mr. Jim just didn't care what anyone thought, he was comfortable. Good decision.

After we shook hands, I noticed a very large sign, nearly lettered in hand that stretched across the back wall: "THERE IS NO SUCH THING AS AN UPHOLSTERY EMERGENCY"

I chuckled, pointed to it and said "Mr. Jim, I like that!" I had encountered more than a few people who felt they had true emergencies based on a situation like that.

In his best long drawn-out Southern drawl, he said, "Well BILLY (no one had called me Billy since I was a little boy, and then only by mistake)...."Well BILLY, here's how it is son."

I liked this man...we did our business, and from this less than impressive location came some of the best upholstery work I have ever seen, faultless, exquisitely done...and I learned a good lesson in perspective.

There truly is no such thing as upholstery 'EE-mergency".

Sort of makes you really think about what's a real EE-mergency, and what ain't.