The Arab village of Tarshiha was the primary military outpost for Fawzi al-Qawuqji and the Arab Liberation Army during the Arab-Israeli war in 1948. After sustaining hours of plane bombings and heavy artillery fire, the town was overrun by the Israel Defense Forces during Operation Hiram. Tarshiha's fighters and villagers were forced to retreat, with most heading north into Lebanon. ___________________________________________________________________________________________ My grandfather left Tarshiha on foot and headed for Lebanon, with hope that he would return once the war was over. Little did he know that he would become a refugee, and the first of four generations of Palestinian refugees who would live in refugee camps, deprived of human rights while caught in a limbo between the right to exist and the right of return. More than a third of all Palestinian refugees now are forced to live in poorly-maintained refugee camps in Lebanon. In 2002, my grandfather passed away. On his deathbed, Tarshiha was all he talked about. He had lived his entire life dreaming of the day he would return, and when fate betrayed him, dreaming became all that he had. He even asked to be buried there--a final wish that was impossible to grant. No Palestinian refugees are permitted to travel into Israel or any of the Palestinian territories. Tarshiha is only 100 kilometers away from the Lebanese capital of Beirut, but with a closed border standing between Lebanon and Israel, Tarshiha is practically unreachable. 67 years after his exodus, I embarked on a journey to find Tarshiha, the place my grandfather called home. As a Canadian citizen now, I have become the first member of my family able to legally enter Israel. As I drove north from Jerusalem, my mind was filled with memories of my grandfather. I thought of all the stories he had told of Tarshiha--about the mosque, the church, and the roads with the olive trees. I listened to the music my grandfather loved, and lost myself in the reverie. I was scared and excited at the same time. I was finally seeing the land that my grandfather had painted in my imagination for so many years. When I first came upon a sign that read Tarshiha, I stopped, took a photo with it . . . and cried. 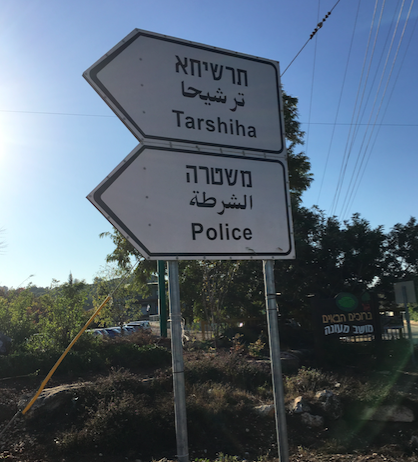 I wasn't sure what to do next. Surrounded by strangers, I didn't know where to begin my journey through my family's origins. Suddenly I was living my grandfather's dream, seeing Tarshiha with my own eyes. The old streets are exactly as he had described them. The mosque is there, the church still stood. I had the biggest smile on my face, mixed with fears and tears. 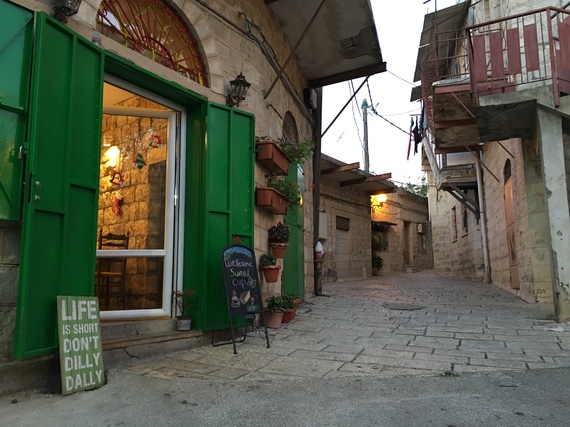 I stopped a young man walking down the street. "Is this Tarshiha?" I asked. He answered in Arabic, "Yes, this is Tarshiha." I knew that it was, but I sought spoken affirmation nonetheless. Finally, I could hear someone telling me I was in my home village. The young man stared at me and saw a lost boy with watery eyes. But he could not fully see the storm of emotions hitting me at the moment. I explained to him, "My grandfather lived here over 60 years ago. His name is Ragheb Kiblawi; his father's name is Saleh Kiblawi." "Sorry, I don't know who that is," he told me. He stopped a car passing by, and the driver said the same. I was less than surprised, as they both appeared much too young to have known my grandfather. My emotions waned, and I left just a little disappointed. I found a falafel shop while searching for a place to eat and collect myself. Some of the town's residents were gathered inside. When the shop owner heard my story, he became excited. Finally, I wasn't the only one! The shop owner asked someone to take me to an old man well-versed in the history of Tarshiha. I was led inside a tiny hut, where he sat surrounded by maps. He was a real estate agent, and he welcomed me warmly. 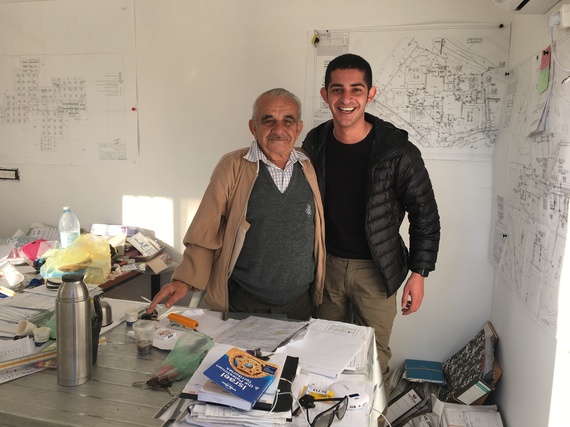 I told him who I was, and he immediately recalled my great grandfather. "Saleh owned a cafe, I remember." I let out a sigh of relief at the further affirmation of my grandfather's stories. They weren't just stories, but a reality that had been harsh on him, affecting each of the generations that followed. The old man asked someone to take me to where my grandfather once lived. When we arrived, I requested my companion to give me some time alone, to which he complied. 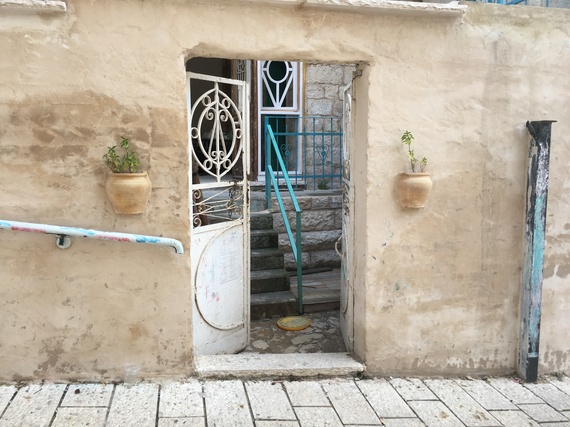 There, life's countless possibilities flashed through every space of my consciousness. I was reliving the stories, imagining the life for our family had there been no war, and no displacement. I took a video of the neighborhood so that I could share it with my family still living as Palestinian refugees in Lebanon. For them, it is even more emotional. It is the place they are forbidden to visit, but now they could see it through my eyes. I walked the streets of Tarshiha for a long time. I listened to stories from any resident who would tell me one. I found an old man who knew my grandfather, and he told me tales that reminded me of him. 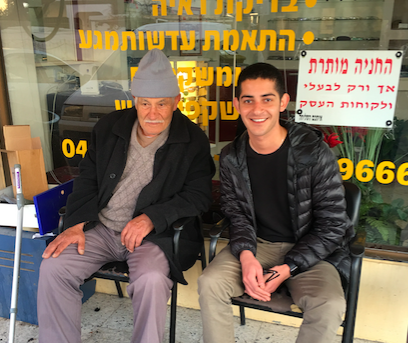 My grandfather's stories were real, the village is real, and experiencing them for myself will help keep those memories alive. It felt strange to finally reach the place I was forced out of for most of my life--an experience my family has been denied. Those around my age living in Tarshiha didn't want me to leave. They invited me for drinks, then we all stayed over at the falafel shop owner's house. They longed to hear about the people who left years ago, and they were living their own tales through me. The next morning, I planted an olive tree for my grandfather in his village. While I could not fulfill his dream of burying him in Tarshiha, I did the best that I could. I chose to plant the tree as a symbol of hope and peace for my family and for the remaining inhabitants of Tarshiha, that they may be spared further conflict and war.

My grandfather was forced out of his village in 1948; this is when he became a Palestinian refugee in Lebanon, never allowed to return back. On his deathbed, his village in Palestine is all he talked about. 67 years after, I am planting an olive tree for him there. Now you can Rest in Peace grandpa... طُرد جدي من قريته (ترشيحا، فلسطين) في ١٩٤٨. بعد ٦٧ عاماً، عدت لأزرع شجرة زيتون في مسقط رأسه الذي حلم بالعودة له و كان كل ما حكى عنه على فراش الموت.

While fulfilling my dream and my grandfather's, I could not help but think of the more than 50 million refugees living in our world today. When will they return to their villages, if ever? How will they feel? What about those whose villages have been destroyed by war? Where will their memories and stories find refuge?