"Provocative" - the theme of the Opening Night Gala at San Francisco Ballet - proved both appropriate and pinpoint perfect. Throughout the evening's separate selections, the dancers and musicians consistently demonstrated the brand of strength and artistic excellence that distinguishes the Company as one of the world's leading producers of time-honored ballets as well as its enviable position in shaping the art form to modern expectations. Time to dispel any notion that Classical Music or Classical Ballet is losing its grip - particularly on the younger generation.

"I'm not a marketing person," said Music Director Martin West. "Not to be complacent - but every generation has asked, 'Where are the young people going to come from to watch this?' And yet, with every generation, the people come. From my point of view, I'm not convinced it's always about young people. I have friends who used to listen to pop music when they were in their twenties, then went to the opera for the first time in their thirties and went absolutely-completely nuts. It's not about being mature! We all find new things later on in life. I think it's great when young people come here for their first experience. You can't hook everybody in one fell swoop - you sew those seeds over time. Some will like it right away and come back for more and more." 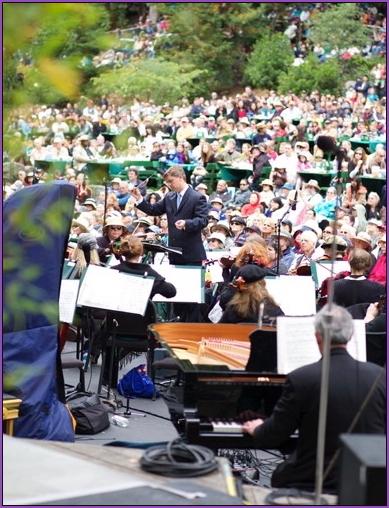 "I don't fear the future for either ballet or classical music. It will evolve to the modern world. People are not always keen to come out for Theatre. A hundred years ago, there was no TV. Concerts could be four hours long and you didn't think anything of it. That's what you did in the evening! But now, if a concert lasts more than two hours, some start shuffling on their butts, waiting to go home - because of smaller attention spans. That doesn't mean the art form is not as valid or appreciated as it once was. The cost of classical music - for this day and age - is just as high as it ever was. Even during Mozart's time, it was a niche for the rich and no one else saw it. I like to think ballet is a good enough art form to just survive."

Including the Gala and the subsequent openings of Programs 1 and 2, audiences have been treated to the works of hot/vital composers spanning from 1720 to right now. The Gala included the world premiere of "Adagio" from Carmen, choreographed by Yuri Possokhov - employing familiar themes by Georges Bizet augmented and arranged by Russian pianist and composer Rodion Shchedrin. Following intermission came the Company's premiere of Gentle Memories - choreography by Jiři Bubeníček (former Principal Dancer at Hamburg Ballet) and score by Karen LeFrak whose works have been staged by American Ballet Theatre, New York Theatre Ballet, and the Joffrey Ballet. As a sort of teaser to Program 3: Swan Lake (opening February 19), Mathilde Froustey and Davit Karapetyan were teamed in the virtuosic pas de deux from Act 3. Bach, Beethoven and Bartok - who never envisioned certain of their compositions in the hands of a dance company - are sharing the 2016 Season with Léo Delibes (Coppélia), Virgil Thomson (Drink to Me Only With Thine Eyes), Igor Stravinsky (Rubies) and newcomers Thom Willems (Pas/Parts) and John Adams (Fearful Symmetries).

"I really like John Adams' music and we've been fortunate to set three ballets to it. I've also conducted his music elsewhere. Fearful Symmetries is very challenging. Sometimes it sounds like eagerness, but it's not. Rhythmically, the music is very difficult. Adams combines rhythms together with lots of things going independently. All the musicians have to maintain their section in line and very often they're playing something completely different. The conductor has to keep it really steady. In our situation, being in the pit, the orchestra cannot always hear each other. If you heard the score played at Davies Symphony Hall - where the orchestra is set up beautifully - the musicians can all hear each other very well. In the pit, our arrangement is long and thin. So, it's increasingly more important for the conductor to be very clear and have a good sense of bringing everyone together. Yes, there are a lot of challenges, but Fearful Symmetries is particularly fun. It's one of Adams' earlier works. With the four saxophones, it's almost like Big Band music." 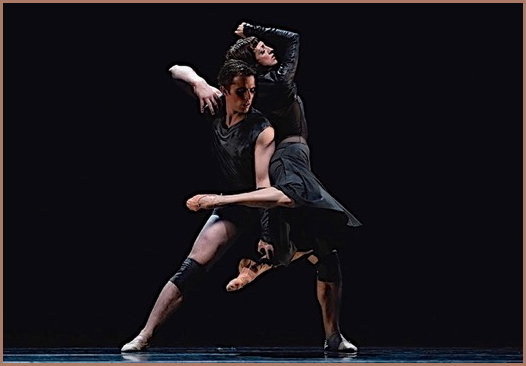 I asked Martin about the actual appearance of the Adams score. How does its "look" compare to that of Tchaikovsky's Swan Lake?

"A lot busier! When you first see the score, you may think, 'How is this ever going to work?' But when pared down and you realize how it all fits, then you just have to marvel at it. I literally just stared at the score for hours on end. Before I got to the first rehearsal, I was imagining everyone's intricate rhythms and - if I were playing - what I would need to see in order to keep up. Sometimes the rhythms are different for the various instruments. I had to come up with a way of beating it out so that everyone would be able to continue playing without being disturbed. It's a fine line where you're driving something quite strongly but, at the same time, you can't drive it too hard or someone is bound to get jerked off the rails."

The day we spoke was fairly typical in the life of a ballet conductor - this one involving a rehearsal for the much-anticipated encore of Magrittomania by Choreographer in Residence, Yuri Possokhov. I asked Martin about separate rehearsals for multiple casts. 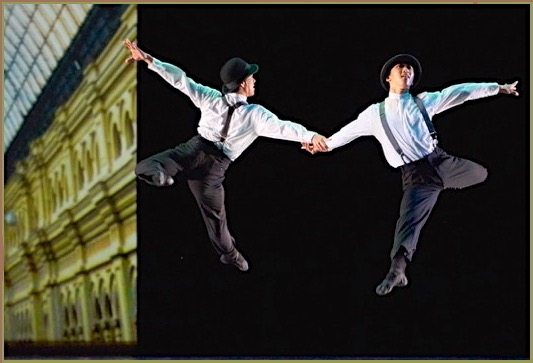 "Today I'm watching to see if there is something different about the casts. Magrittomania is a relatively simple ballet to do. I don't expect there will be any surprises. But the last three weeks have been pretty hectic - preparing for the Gala and then two programs opening right after. Once they have opened, then we have to scramble to get second and third casts on as well. On the day of the opening performance, we do a dress rehearsal. The day before that, we do an orchestra and stage rehearsal. Those are the only two rehearsals we have with orchestra and dancers together. It could be - depending on the ballet and how ready each cast is - the two orchestral rehearsals might be done by the first and second casts. It's generally the third cast that doesn't do it with orchestra until that performance. Liam Scarlett's Fearful Symmetries, for instance, is not going to change from one cast to the next. The music is what it is and they will dance to it. But with Swan Lake, when you have a different Odette/Odile, things play different. It depends on the night."

The 2016 Season will see the retirement of two of SF Ballet's quintessential male Principals - Joan Boada and Pascal Molat. The two dancers have had an extraordinary impact upon the Company - each attracting legions of fans worldwide, both critically acclaimed on separate lists of distinctive dramatic roles and being the first to dance in a World or Company Premiere. Prior to joining San Francisco Ballet, Pascal trained at Paris Opéra Ballet School - Joan at the National Ballet School of Cuba. 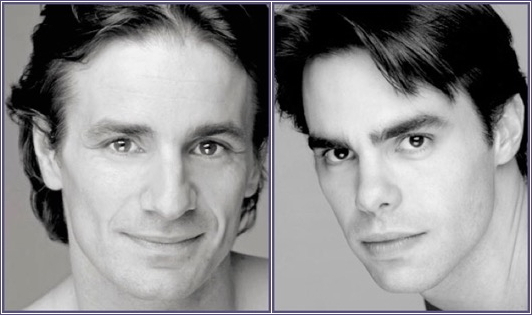 "Did I notice a difference in their training? Probably not as much as a dancer would. As a conductor, what really concerns me is musicality along with heart and soul. I'm less concerned whether someone has a nice turn-out. Everyone has their own way of looking at ballet. During my twelve years here it's been an absolute joy to work with both of them. They are very different dancers. Apart from anything else, Joan has been an incredible partner. He and Lorena Feijóo were brilliant in Don Quixote. Ask any of the girls - his partnering skills have been just incredible. He makes ballerinas feel so great when they're on stage. I've never seen anybody move so quick as Pascal - even now at this age. The role that I think suits him down to the ground is Sancho Panza in Don Quixote. Pascal runs the whole gamut. Even though he's a live-wire, a fast guy - he is always very tender and passionate as well. I don't know which role he likes best, but I've seen him do Hilarion in Giselle many times. His portrayal got deeper as time went on." 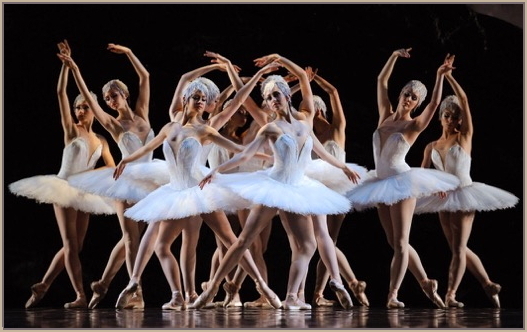 "The first moment I ever-ever laid a baton on an orchestra, I knew that's what I was going to do. I was in England when I first started conducting ballet. I basically had not seen any ballet when I got my first job conducting one. My first-ever performance was Swan Lake. They do it a lot in England. I haven't done it as much in San Francisco because we do many more contemporary things in addition to the classics. We've done Swan Lake three times since I've been here. In England, we do it every eighteen months. So, I am really looking forward to it. This is a big year and the Orchestra is playing their socks off! We also have a new Concert Master. I can't wait to hear how she plays the solos for the White Swan. At the Gala, you heard her play the Black Swan. I thought it was outstanding. Although it's been a very consistent orchestra - we haven't played Swan Lake for a few years. It's going to be a lot of fun to work on it again."