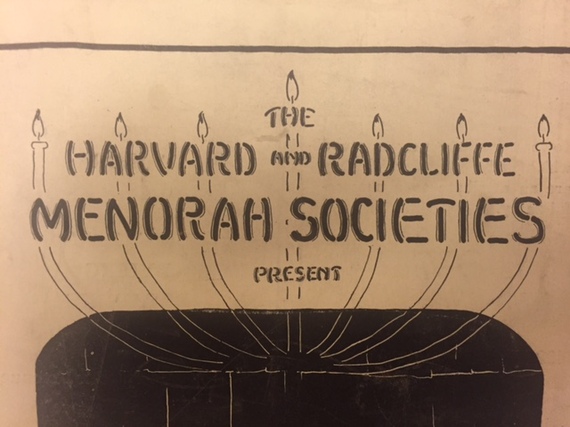 "Lift your eyes and look around: All have gathered, have come to you." (Isaiah 60:4)

A 100 year-old congregant of Rabbi Max Davis (Harvard '04) recently rediscovered among his possessions a program booklet from an evening of "Three One-Act Plays" presented in Agassiz Theatre by the Harvard and Radcliffe Menorah Societies (the precursors of Harvard Hillel) in May of 1928. Thanks to Rabbi Davis, the item is now on my desk.

The document is a true time capsule, full of delectable peculiarities and fascinating tidbits.

"Parties!" barks the first of many advertisements for Harvard Square establishments of the day, printed inside the booklet, this one from Covin Floral Artists ("open evenings"), "The mood of the women determines the success of any party. No agent can equal flowers for effecting a mood which induces gaiety. They are an attribute to a successful party."

"The Commander Hotel Barber Shop," we learn farther down on the same page, is "Under New Management of George A. Condon, Formerly with Wm. Filene & Sons, Copley Plaza, Hotel Statler, Present Manager of Harvard Union Barber Shop," who promises that "Four American Barbers" use "Clean Sanitary Implements" and take "Appointments" - "if you wish."

Charlie's Barber Shop, nearby on Massachusetts Avenue, and nearby in the program, competingly contends, "This is the place where College Men get good work done," and also, "We specialize in Ladies' Bobs" - the fashionable women's haircuts of the time, or the beaus?

Notably, printed above less surprising names such as Mrs. Louis Epstein, Mrs. Nathan Isaacs, and Mrs. Benjamin Siegel, the evening's first-listed Patroness - of "Cripples" by David Pinski (translation from the Yiddish by Isaac Goldberg), "A Marriage Has Been Arranged," by Alfred Sutro, and "Rapunzel" by Alter Brody - is Mrs. A. Lawrence Lowell.

Was this an ostensive gesture of conciliation, or of capitulation perhaps, toward the end of her husband's tenure as Harvard's 22nd President, in view of his long campaign to reduce Jewish enrollment in the College, not to mention his effort to ban non-white students from living in the Freshman Halls? (On both matters, Lowell was overruled by Harvard's Board of Overseers.)

And then there is the "Palestine Tour" advertised for the then-impending summer - which just goes to show that today's Harvard College Israel Trek - which our present-day students have worked with such innovative spirit to create so successfully these past several years - is not so new under the sun.

Where has the world wanted us?

"Of the goodly army of playwrights who have, of late years, attempted to tell the story of the Immigrant Jew in America," runs the program note to Brody's "Rapunzel" in the 1928 booklet, "few have attained a degree of artistic effect commensurate with the breadth and poignancy of their theme."

"Stifled by the concrete efficiency of 'Columbus' Kingdom,' unable to comprehend the deeper meaning of the vast materialism which he sees encroaching upon Nature's domain, he rebels against it, 'Everything is walled in and barred. The very earth is bound in stone, as if it were a convict. The sky seems to hang right over your nose - there is nothing to lift one's eyes to.'" So says and quotes the program, describing the pathos of the Jewish poet-hero in Brody's play.

Where do we want ourselves?

"When you come into the land that the Eternal One your God is giving you as a heritage..." begins our reading from the Torah this week (Deuteronomy 26:1) - and the scriptures go on to describe how we are to bring the first fruits of the soil to the Temple (Deuteronomy 26:2-11), and how we are to "set up large stones, coat them with plaster, and inscribe upon them all the words of this Torah." (Deuteronomy 27:2-4)

The sacred vision, the yearning, ages old, is for surroundings that harmonize with our hearts, and affirm our souls - for a place where the very stones teach us how to be, proudly, instead of stones having to be eyed cagily as all too apt to drive us out or wall us in.

"The Menorah Dramatic Group feels that its third venture into the field of production needs no justification," argues the final note in the 1928 program with endearingly sophomoric insistence, "The appreciative responses which greeted the two previous attempts have encouraged the efforts of the Group to this third annual presentation."

And here we are today - Harvard Hillel of the year 2016 having recently staged Joshua Harmon's "Bad Jews" in our own Rosovsky Hall, just last spring - still torturing ourselves, in our diaspora, to great dramatic effect, about the quandaries of our persistent existence and our wanderings.

Here's to homecoming - or, in the particular and local case, to our upcoming Harvard Hillel kosher tailgate at the Harvard-Yale Game.