I'm looking at a photo of myself topless.

I'm five years old, playing the role of an Indian in my kindergarten Thanksgiving Day play, red war paint on my chest and cheeks, and a paper feather painfully stuck in my head. I remember being much more concerned about exposing my naked chest than about some historical sit-down between Pilgrims and Indians.

Thirty-five years and many thousands of tuition dollars later, I still don't like being shirtless in public, and also don't know much more about Thanksgiving's true origins than I did then. So I did something I never would have dreamed of back in elementary school. I Googled Thanksgiving. 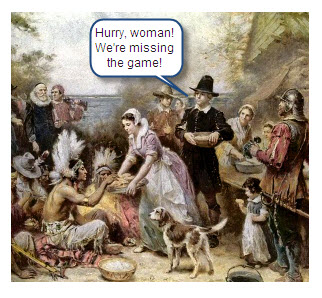 This is what we know: A long time ago, some 130 restless Europeans cashed in their frequent sailor miles for adventurous times -- and a helping of religious freedom -- in the New World. They brought their families, rats, and funky buckle hats. The Wampanoag Indians, happy to see the Pilgrims in the way deer are happy to see an oncoming tractor trailer, gave them corn and helped them survive the harsh winter. In return, the Pilgrims gave them small pox. The Pilgrims and Native Americans had a big three-day meal with turkey, squash and succotash. One generation after the first Pilgrims accepted the natives' generous help, the two groups were attacking each other instead of turkeys.

Fast forward half a millennium or so, and we're still replaying some of those early customs. We still carve turkeys, set our tables for guests we're wary about, and watch Redskins and Chiefs on TV. There were no Thanksgiving Day parades during Pilgrim times, of course, but it's quite possible Willard Scott was there.

In my first life as a father, Thanksgiving started with everyone getting up early and watching the Thanksgiving Day Parade on television. We yawned through the marching bands, delighted at the majestic floats, and gawked at B-level music stars moving their freezing lips to songs they'd come to hate. By the early afternoon, the kitchen would be abuzz with rolling, chopping, basting, sweating, and swearing. Inevitably, someone would become inordinately worried about the turkey. Was it taking too long to cook? Was it too pink? Too dry? Was it organic, or did it have track marks on its leg? Was it really a chicken?

We complimented everything on the table for fear of insulting a contributing guest: "This salt is so good and salty! Who here made this salt? And this water is to die for!" Meanwhile, my Dad looked longingly at the mute television as if it were calling out to him.

My ex-wife and I plan to switch Turkey Day custody every year, so last year I spent my first Thanksgiving in nearly a decade without my kids. I yakked on about the weather, car troubles, and work as I usually do, but it still felt incomplete, as if someone forgot to invite the turkey.

The day after Thanksgiving, my wife Anne and I took my kids to Disney's High School Musical on Ice. What could be more patriotic than ice dancers simulating basketball to a syrupy Disney soundtrack? The kids were mesmerized, and I dropped cash at the souvenir stand as if I was competing for their attention with Thanksgiving itself.

When we got home, we immediately dropped our Disney gear, kicked off our shoes, and flopped on the couch to watch the previous day's parade on the DVR. In the kitchen, Anne was making chicken and French fries. Lazy cats were warming the furniture all around us.

With the familiar smell of comfort food in the air, cheers and tympanis from the roaring television, and a fading likeness of Zac Efron stamped on my hand, I realized that all traditions -- even late-coming ones -- have a starting point. This is ours. This is our Plymouth Rock. (Well, perhaps the Plymouth Living Room).

And these days, I get to keep my shirt on. If that's not something to be thankful for, I don't know what is.

Joel Schwartzberg is an award-winning essayist, contributor to The Good Men Project, and author of The 40-Year-Old Version (in which this essay appears). He gives thanks to anyone giving him a subway seat, letting him cut into their driving lane, or just checking out his new book.