Gloria Steinem has repeatedly stressed the importance of women sharing their personal stories as a way to add their voices to the human record. This was the strength of The Daily Beast's three-day event. For the 300 women leaders gathered to be informed and motivated to action by the roster of speakers, there was no shortage of inspiration. The underlying message to be taken was that women, regardless of their social milieu, are leaders. Their contributions to jump starting the change that is sorely needed, can lead the way to making a difference on the world stage.

Christine Lagarde, the French Minister of Economy who was influenced by her mother and grandmother, gave the advice, "Never imitate the boys. Be yourself." Anchee Min, author of The Red Azalea - which is banned in China, gave an animated account of her life, which included a stint in the Red Guard and years in a labor camp. She told the audience that she became a feminist from looking at the bound feet of her grandmother, who warned her, "Women are grass. Born to be stepped on."

During "Changing the Equation: How Technology Can Change Women's Lives," Ann Livermore and Cherie Blair gave encouraging news for the 21st century. Livermore, Executive Vice-President of HP, believes that "power is now in information." Blair, who has placed technology at the center of the Cherie Blair Foundation, maintains that women need economic power to make their own life changes. She pointed out that "women in remote areas are starting to get their hands on the mobile phone," and it is their first entry into the tech world.

Blair discussed the gender gap as it related to access to technology in south East Asia. The disparity reaches 40%. She issued a call to action to "get 10 million dollars from industry to get phones to 100,000 women." Cell phones are being used to send messages on health and domestic violence, and to carry money via "a tech card." Livermore sees all services as being deliverable via the Internet. Currently, NGOs are giving literacy classes in national languages, teaching reading and writing via cell phones.Queen Rania of Jordan has made women's education her signature cause. In conversation with Katie Couric, she shared her belief that secondary education is essential to prevent "the loss of potential." She said, "We're making progress, but not fast enough." In her view, the crucial first step is to create awareness for the need for girls to be educated. "The dividends would cascade throughout society," she said. She stated, "Arab women do not fit into a single model," insisting that stereotypes needed to be challenged. She added, "Western women can help women in the Arab world, but women there need to chart their own course." 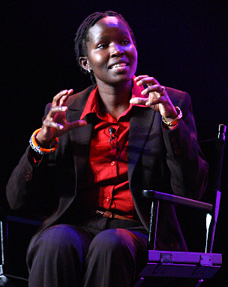 Part of the conversation about education led into the topic of female genital mutilation (FGM). Again, it was a personal narrative that underscored the theme. Kakenya Ntaiya, Founder of the Kakenya Center for Excellence, told about the bargain she made with her father to undergo "circumcision" in exchange for the opportunity to finish high school. Upon graduation, Ntaiya sat down with the village elders and negotiated to leave her Kenyan village to attend college in the United States - with the promise of returning to help her community. Since 2006, she has undertaken the goal of building a girls' school in Enoosaen.

"Toppling Traditions," moderated by Diane Sawyer, began with Edna Adan Ismail, former Foreign Affairs Minister of Somaliland. She spoke about FGM using the descriptive phrase, "Little girls are still being chopped up." The procedure is performed on a continuum, from cutting the labia to sewing up the vaginal opening to "the size of a match stick." Ismail told the horrific story of an 11-year-old girl with Down Syndrome who "had been cut to the bone," because her Mother thought it was "the right thing." Ismail is working to recruit religious figures to speak out against the practice.

Maria Otero, U.S. Under Secretary for Democracy and Global Affairs noted, "Change comes from the bottom-up and top-down." She said, "Women's access to health is essential to end cutting." Otero suggested that the West shouldn't be coming in with "a mandate." During the conversation, which included Molly Melching, Founder of Tostan and Marietou Diarra, who discussed the loss of her two young daughters to FGM, the terms Female Genital Cutting (FGC) and "the tradition" were used interchangeably. Wondering if there was a reason that the verbiage had been sanitized, I called Taina Bien-Aime, Executive Director of Equality Now. She told me unequivocally, "Female Genital Mutilation (FGM) is established and accepted human rights terminology across Africa and around the world. FGM is recognized as a human rights violation - which trumps any culture. For government and U.N. officials to use the term 'genital cutting' unacceptably waters down the gravity of FGM and its impact on girls' rights."

The first panel on "Solutions Sunday" was "Change Makers and Innovators: Women/Tools/Technology." Lorie Jackson, Director of the Women's Economic Opportunity Initiative at ExxonMobil, spoke about how technology can best improve women's lives - and the barriers that currently exist. Jackson posited, "We need women at the table of power - and that includes technology." She also expressed the need for women to "see themselves as innovators." That wasn't a problem for Katherine Lucey, Ashoka Challenge contestant and founded of Solar Sister. Focusing on a solution that harnesses the power of solar energy - which is uniformly available - Lucey emphasized that it was important to let women take their own initiatives within their respective environments.

There was palpable anticipation for the interview with Valerie Jarrett, which followed. 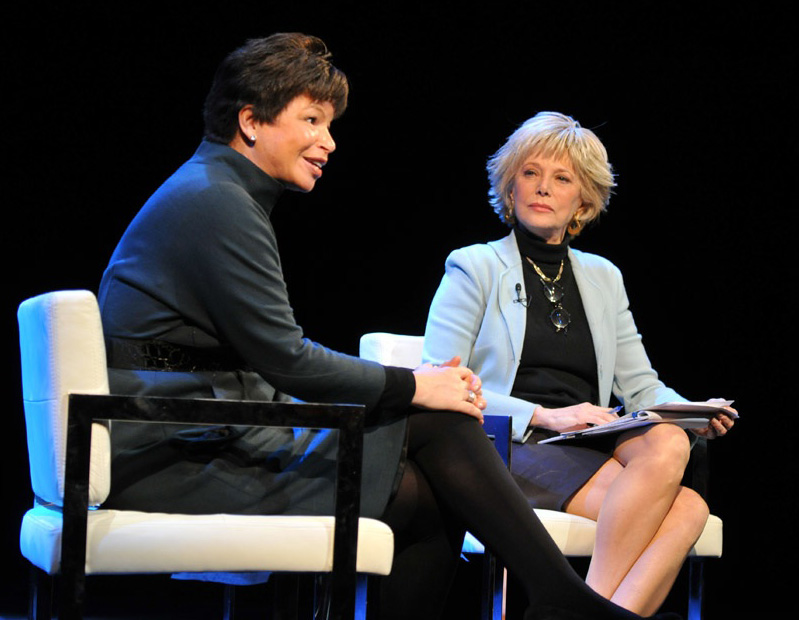 Lesley Stahl's questions were primarily amiable, spotlighting Jarrett's background and relationship to the Obamas. She did ask Jarrett to comment on the President's first year and the "disillusionment" that many supporters have expressed. Jarrett immediately pointed to the "inherited" problems that Obama had coming in, and the unrealistic expectation that all would be well in twelve months.

Moving to funding and aid initiatives, Campbell Brown spoke with Jacqueline Novogratz, the Founder of the Acumen Fund, who has been working between the market and traditional aid. The fund, which has 40 million dollars invested, reinvests its profits. The subsequent panel looked at reinventing aid and featured one of the most interesting speakers of the weekend, Dambisa Moyo. Born and raised in Zambia, Moyo has a PhD in Economics and is the author of Dead Aid: Why Aid is Not Working and How There Is A Better Way For Africa. I first heard her speak on Fareed Zakaria GPS, where she reflected on the detrimental effects the standard development aid models have. She told the summit audience how "dependency aid erodes the relationship between government and the individual," yielding a system in Africa that has evolved to where "the monies come from aid." Moyo clarified that the current model was built on a 1950s mind-set, which evolved from the cold war and political motives. In defining her vision of aid, Moyo maintained, "The goal should be to create economic growth. She added succinctly, "We must have governments we can hold accountable."

The wrap up 90-minute dialogue was titled "Seize the Spotlight, Harness the Power!" Tina Brown engaged six women, including Lauren Zalaznick, President of NBC Universal Women and Lifestyle Entertainment Networks. Zalaznick offered the comments, "Do as much good in the world as you can and make money doing it," and "You have to know what you have been hired to do." She probably has achieved that at the helm of Bravo media, which features the "Real Housewives" series. Nora Ephron, writer and filmmaker, said pragmatically, "The mainstream media doesn't want to hear it if it isn't sexy." She suggested using the web as an alternative platform. Not a bad suggestion considering "earnest topics" were defined as being problematic.

I couldn't help thinking that Saturday's finale should have been scheduled at the culmination of the conference's close. It featured Zainab Salbi, author and founder of Women for Women International. Salbi led a tribute, "Women Are the Peacemakers." She addressed the crowd with passion saying, "The road ahead of us still is long. We are still a marginalized majority. We have 18% of political representation in the world." She continued, "It's time to build a women's global movement. With every crisis there is opportunity. We have data for the first time that [shows] there is no growth without women. When you invest in women, you always win!" Building to a crescendo, Salbi insisted, "It's time to speak to leaders who have not heard us before. It's time for sisters to get together and change the world." Salbi ended with, "We need to roar as one voice."

It's a goal worth pursuing.

This article originally appeared on the website Women Make News.