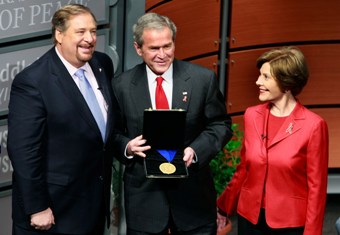 I just read your description of the phone call between yourself and Rev. Warren.

I have been angry for so many days now. Furious with myself for trusting Obama while knowing he failed to support gay marriage during the election and furious with Obama for calling himself a "fierce advocate" for LGBT rights while promoting a man who refers to people like us as pedophiles. I even stopped watching CNN and MSNBC because I couldn't stand one more pundit calling the Warren pick "smart politics."

I am so relieved that you had the opportunity to hear Warren denounce his previous views on LGBT relationships. Your story about that conversation made me breathe easier than I have for days. I also heard that he recently revamped his church's website, removing many homophobic phrases.

But I know that one private telephone conversation and a quick edit of website content is not sufficient to undo the damage of the Warren choice.

Obama promised a presidency that reached across the aisle. Many are pointing to the Warren invitation as evidence of compromise. He wants to be president for all Americans and if that means upsetting his base, it might well be worth it. I support his message of inclusion. I acknowledge that giving the invocation at the inauguration is a nominal position without policy implications and could go a long way towards purchasing political capital in Congress.

Still, this concession legitimizes a kind of hate speech that torments LGBT people across the U.S. on a daily basis. It says, even though you irrationally degrade a group of American citizens, you are not excluded from the conversation. You will, in fact, be rewarded for convincing so many other Americans that what you believe is correct. You may be instrumental in passing regressive legislation, but we want you to play an important symbolic role in this presidency because you are so popular and your particular hatred is so popular.

I am willing to agree that Reverend Warren is a good guy who said some bad things. I, like you, do trust that communication and cooperation will lead to increased tolerance and progress. I welcome his conversation with the LGBT community.

I can't forgive Obama, though.

It was his choice that legitimized homophobia. It is his continued support for Warren without the demand that Warren apologize or publicly retract his statements that teaches other Americans to be okay with the hatred and degradation of LGBT Americans.

You have been fighting for equality for so many years longer than I have. I am indebted to you and your struggle and I share your hopefulness for the future. But I fear that this action by the Obama administration has set us back significantly.