Last Thursday my wife Sharon and I attended the White House 2013 Pride Reception. This was not only a moment of great privilege for us but was potentially a once-in-a-lifetime opportunity for our daughter. At only 8 months old, Sadie will not remember much about the event, so we considered ourselves incredibly fortunate to be able to snap a couple of photos of her with both President Obama and Vice President Biden. But as my wife and I stood with our baby girl in the East Room of the White House, listening to our president give his remarks, my thoughts were consumed with how far we'd come in just a few short years -- and how far we still have to go to achieve full equality. 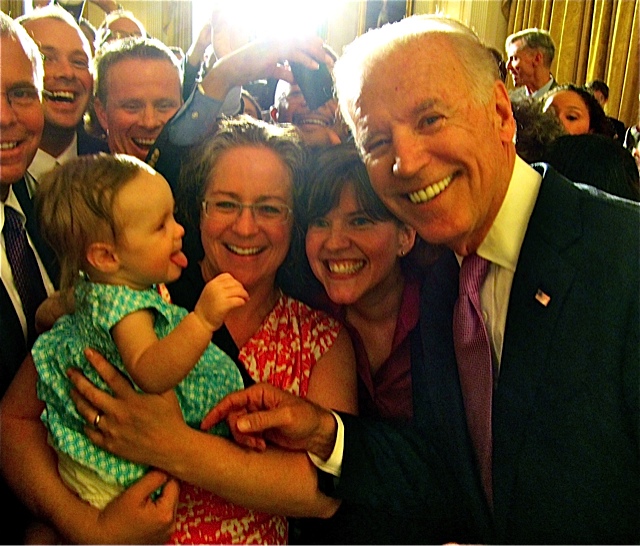 Ten years ago we were anxiously waiting for the Supreme Court to decide another landmark gay rights case. And on June 26, 2003, the Court ruled in Lawrence v. Texas that our relationships could no longer be criminalized. And now, just 10 short years later -- almost to the exact day -- the court is expected to rule on the constitutionality of DOMA, the law that requires the federal government to discriminate against married same-sex couples.

DOMA inflicts numerous harms on families like mine, many of which are financial. We incur increased tax burdens, have inadequate access to health insurance and, in many cases, are unable to rely on important social safety net programs that opposite-sex couples take for granted. But probably the most egregious harm is the stigma that comes with this kind of government-sanctioned discrimination. DOMA has not only served as a license for the federal government to discriminate, but it has also legitimized discrimination against LGBT people, same-sex couples, our children and our families at every level of society.

As President Obama spoke, I thought about the personal stories of love and commitment that have brought us to this moment in time -- stories of my family, and families like mine, who live openly and honestly each and every day. We go to work, we attend synagogue, we serve on the PTA, we coach little league and, yes, we even lead Boy Scout troops. We are teaching our children to tell the truth, to treat others with respect and to be proud of their families. Our lives are not so dissimilar from other families. The only difference is that because of laws like DOMA, we are treated differently. Our marriages are "skim milk marriages" that render our families second-class.

A friend of mine remarked recently how many incredible things Sadie has experienced in her short life. I thought about that as we listened to the president speak about the great progress the LGBT community has made over the last few years. Sadie was born at an incredible time -- at a tipping point for LGBT equality. And Sharon and I are so grateful to be here, at this time and place, as part of this community of people, in this movement. And while Sadie is unlikely to remember very much of this time in her life, Sharon and I will show her the pictures and tell her the stories. I'll teach my daughter about John Lewis, whom we also met at the White House Pride Reception, and the things he has seen in his life, the violence and discrimination he experienced. While we could never know what it has been like to walk in his shoes, I cannot imagine another human being who better understands discrimination and the struggle for equality than this man. He has been an unwavering supporter of equal rights for LGBT people throughout his lifetime, and we should take a great lesson from him: that love and justice always win out over hatred and fear. And just as Brown v. Board of Education was a landmark Supreme Court decision that was critical to the advancement of civil rights for African Americans but came nowhere close to ending racial inequality in this country, we must also remember that should the court rule in favor of Edie Windsor and strike down DOMA, it will be a significant step forward in the movement for full LGBT equality, but our work is far from complete.

My family and I are fortunate to live in Maryland, a marriage equality state. And when DOMA falls, we expect to have access to the full range of federal benefits, privileges and responsibilities we've long been denied. But this will not necessarily be the case nationwide. Same-sex couples who are validly married yet living in states that do not recognize their relationships may very well have some difficulty accessing a number of federal benefits. How this will play out remains to be seen and will likely take some time to resolve.

And we must remember that federal recognition of same-sex marriages does not solve all our community's problems. Should the Supreme Court strike down Proposition 8 and restore marriage equality in California, there will still be 27 states that continue to deny same-sex couples the right to marry. In 37 states, children being raised by same-sex couples will still be unable to create legal relationships with one of their parents, which leaves these kids especially vulnerable in times of crisis should they need emergency medical care or if a parent dies or becomes disabled. And in 29 states you can still be fired from your job, denied equal access to housing and refused service in a restaurant simply because you are LGBT. Much still needs to be done to ensure full equality for working families, LGBT people of color, those living at or below the poverty line, both LGBT youth and LGBT elders, undocumented and immigrant families and those living with serious health conditions or disabilities. We cannot become complacent. If anything, a win at the Supreme Court must energize us to push forward to do the work that remains.

When I think about how far we've come since 1963, when Edie Windsor and Thea Spyer met, I take to heart the president's words:

We know from our own history that change happens because people push to make it happen. We've got to do the hard work of educating others, showing empathy to others, changing hearts and minds. And when we do that, then change occurs. It doesn't come always as quickly as we like, but progress comes. We've got to keep pushing.

We must acknowledge and build upon the work of those who came before us. Our families need to live proudly, be visible and share our stories. Progress, as President Obama said, "comes from the courage of those who stood up, and sat in, and came out." We are here today standing on the shoulders of those who've come before us. And while we've accomplished a great deal, there is always more to do. My wife and I hope -- and are committed to ensuring -- that Sadie will recognize her place both in this movement and in the world. And just as those who came before Sadie fought to make the world a better place for her, our pledge to Sadie is that we will teach her, through our words and our deeds, that she too has a responsibility to those who come after her. For our family, we will look to the Jewish tradition of "tikkun olam" -- our responsibility to help heal the world. Whatever faith or tradition guides you and your family, my hope is that your families will join us in that effort.