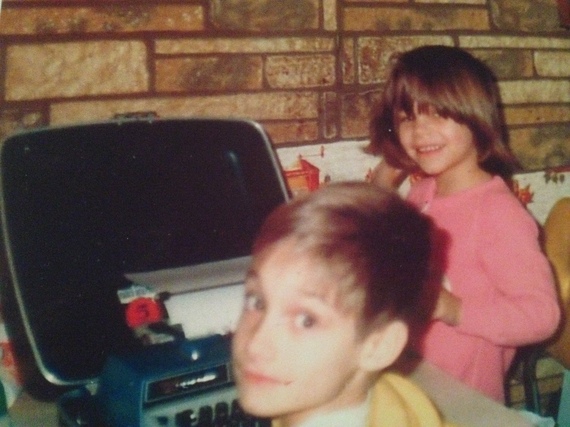 As a mother trying to parent in the 21st century, I do my best to warn my kids of the dangers out there in the world. Today with the advent of a digital network that connects the entire world in seconds, our new reality is a cozy place where people (even the dangerous sort) have access to our children.

When I think of this I begin to wonder....

At a local park, I witnessed a woman explaining to her children the dangers of the world without actually saying anything relevant instead she watched every move, stepped in to prevent falls, stared with crazy eyes at the one man who passed by--I think he was part of the parks crew--and avoided giving her kids any meaningful or lasting message about the ways of the world. One day I thought, they will be without you. Will they be prepared?

When I witness this I begin to wonder....

You see I am a different sort of parent and maybe it is because of when I came from--the 1980's. We 80's kids were raised on a steady stream of Afterschool Specials, Just Say No, MADD, SADD and the belief that at any given moment our lives could end. The cold war raged on the other side of the world. Presidents and pop stars warned us of the daily dangers. "Yeah, everybody's got a bomb, we could all die any day."

We didn't have access to the technology that our kids do today, but we did have just enough information to be scared. It came from parents who watched the nightly news and weren't afraid to discuss it in front of us. There were school yard rehashings of kid crimes that were so scary they had to be true. Didn't they? Who doesn't remember the man in the van or was he a clown? And the pusher on the playground ready to sell you uppers, downers, and Mickey's. What the hell was`1 a Mickey anyway? I still don't know.

Our older siblings babysat us by throwing us in front of the television where we watched afters school specials with our favorite stars who showed us the price of being stupid. Don't have sex or you'll never go to college or worse, you'll catch some sort of STD. Don't drink and drive, or you'll die. Don't get in the car with a stranger or they'll do horrible things to you, and you'll die.

Whatever information we couldn't find we made up and our imaginations really had a way of taking us to a very bad place where everybody---DIED!

As I parent now, I wonder if we should bring back some of those same 80's scare tactics our parents, and the world, used to scare the shit out of all of us.

Afterschool Specials
These morality plays taught us that danger lurks in all corners. We should keep our privates private and our bodies to ourselves. Don't touch the funny stuff and stay off the sauce. They scared us straight with the help of our favorite actors (Rob Lowe, River Phoenix and Scott Baio). They also featured several child stars who obviously missed the lessons they were hired to teach the rest of us. Here are two examples:

A Very Delicate Matter Teenage girl is shocked when a former boyfriend tells her he has gonorrhea. Not only does she get tested, she must tell her current boyfriend to get tested as well. Co-starring Zach Galligan (Gremlins).

Please Don't Hit Me, Mom Teenager Nancy Parks (Nancy McKeon, The Facts of Life) stumbles upon a case of child abuse. It turns out her new boyfriend (Lance Guest, The Last Starfighter's) younger brother is regularly beaten by their mom (Patty Duke, whose real-life son Sean Astin portrays the victim in question).

Nancy Reagan
The First Lady of the 1980's advised us to just say no. She also recruited our favorite actors to help spread the message on shows like Punky Brewster and Different Strokes. Drugs made you wacky and caused you to make dumb decisions and YOU DIED.

Television Movies
I have three words: The Day After which told the story of nuclear fallout, and it wasn't pretty. I, for some reason, was allowed to watch this on television at the tender age of 8. I cried for days after worrying that my teeth and hair would fall out due to radiation, and I'd look like that guy Sloth from the Goonies.

The war on drugs didn't start and end with Nancy Reagan and television shows, it bled over into the advertising with commercials. Of course the message was confusing, one minute they were selling you cigarettes, the next they were warning you of the effects drugs had on your brain.

Missing Kids
They were everywhere and nowhere. They were pulled from windows, forced into vans, and stolen from front yards as parents shrieked at the sight and sound of overturned bikes with wheels still turning. Around every corner was a man waiting with candy or a dog or a dog eating candy. How the hell would we make it to adulthood? Every day we sat at breakfast we were reminded that the unthinkable could happen. The faces of children just like us stared back from milk cartons. Where had they gone? How could they just disappear?
Slasher Films
When these were released in video stores right about the time I went into middle school they were the nighttime version of afterschool specials with much sterner and permanent warnings: don't have sex, do drugs or drink or YOU'LL DIE.They only one with a shot at living was the virginal, drug and alcohol free (okay maybe she had a wee bit of alcohol or smoked a touch of weed, but she was sort of sober) final girl. She was smart, sassy and listened to her parents when they scared the shit out of her and warned her of the dangers in the world, which is exactly why she lived.

People often wonder how we grew up with parents who let us run free in neighborhood streets. The answer, we were scared shitless. We knew there was danger. We had seen it, heard it and felt it coming in waves from the television and our parents--two trusted sources. We lived with a hyped up version of the truth. We weren't shielded from it, we were force-fed the fear and it rooted and took hold.

Some of us parent as our parents did, by instilling an altered and milder version of that fear into our own children because we believe what protected us will do the same for them. Maybe we are wrong, but we all turned out fine, right? I ask because I parent using my own scare tactics. I tell the truth, the miserable awful truth, even when it's scary. I am not afraid of scaring my kids if it means they remain safe throughout childhood. Maybe it's time to see if I can find some of those Afterschool Specials!!

More:
scaryParenting childhood1980sParents
Newsletter Sign Up
Raise the kind of person you'd like to know
Subscribe to our parenting newsletter.
Successfully Subscribed!
Realness delivered to your inbox